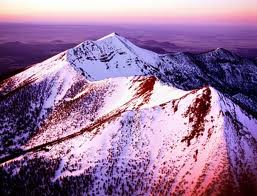 Scroll down for document

The Hopi Tribe filed a new lawsuit to halt the use of reclaimed sewage water for snowmaking on sacred San Francisco Peaks, citing the presence of a threatened plant that only appears on the Peaks.

The Hopi Tribe filed for a mandatory injunction on Wednesday, Nov. 14, 2012. A Flagstaff radio station reported that the Arizona Snowbowl began using the snow making equipment on Tuesday.

The threatened grounsel, or Packera franciscana, consists of only about 500 plants in the alpine forest of the San Francisco Peaks. There are 700 acres of critical habitat on the Peaks, according to the lawsuit filed in federal court in the District of Columbia.

The threatened Mexican Spotted Owl also has habitat on the Peaks, the lawsuit states. The lawsuit is filed against the US Dept. of Agriculture and Secreary Thomas Vilsack, US Forest Service Chief Thomas Tidwell, and Coconino Forest Service Supervisor Earl Stewart.