We're coming back to Washington to fight the Keystone XL pipeline. Join us:

Sunday, November 18th, 3:00 PM
Freedom Plaza, Washington DC
We'll meet at Freedom Plaza following 350.org's Do the Math event, then march around the White House and rally on the Ellipse.
Want to join us for Do the Math? Get your tickets now before they sell out!
Can't be there on the 18th? Take the pledge to add your voice and join us next time.
Dear friends --
In the wake of Hurricane Sandy, as the warmest year in American history draws to a close, as the disastrous drought lingers on in the Midwest, everyone is looking for ways to make a real difference in the fight to slow climate change. We’d like to ask you to come once more to Washington, to resume the battle to stop the Keystone XL Pipeline, mid-afternoon on Nov. 18th.
This summer President Obama took the biggest step of any president to date when he raised fuel efficiency standards -- a move that will cut US greenhouse gas emissions by 10% when fully implemented. Many of you worked to make this happen. Thank you. It’s an important step in the right direction. Let’s take a few more.
As you’ll recall, your efforts last year slowed down the decision, giving the State Department more time to consider the impacts of a dangerous export pipeline that will transport one of the world’s dirtiest, most carbon-intensive fuels. Although they did go ahead with the southern segment, where many of our colleagues are waging a remarkable fight against its construction. But now that the election is over a decision by the President is imminent—the administration has hinted a decision could come in the first quarter of 2013.
Here’s what’s changed since last year: the Arctic has melted disastrously.
Here’s what hasn’t changed: Keystone XL is still a crazy idea, a giant straw into the second biggest pool of carbon. Even if it doesn’t spill, it would add 900,000 barrels of oil worth of carbon each day to the earth’s atmosphere, or as much as the new auto efficiency regulations would save. It would, in other words, cancel out the whole long fight to increase auto mileage. Those tarsands are still the dirtiest energy on the planet.
And more and more people are realizing it. Our brothers and sisters in Canada have effectively blocked the so-called Gateway Pipeline to Canada’s west coast. It won’t be built anytime soon, depriving the administration of their only halfway decent argument—that the oil would just go somewhere else. No, Barack Obama is now even more the man who holds the fate of the tarsands expansion in his hands.
No one needs to get arrested this time—though that may come as the winter wears on. For now we simply need to let the President know we haven’t forgotten, and that our conviction hasn’t cooled. Please be there if you possibly can.
Many thanks,
Bill McKibben and May Boeve, 350.org
Michael Brune, Sierra Club
Naomi Klein, author
James Hansen, climate scientist
Tzeporah Berman, author
Jane Kleeb, BOLD Nebraska
Michael Kieschnick, Credo Mobile
Tom Goldtooth, Indigenous Environmental Network
Gus Speth, author and professor of law, Vermont Law School
Maura Cowley, Energy Action Coalition
Rebecca Tarbotton, Rainforest Action Network
Joe Uehlein, Labor Network for Sustainability
Mike Tidwell, Chesapeake Climate Action Network
Michael Mann, Penn State University Earth System Science Center
Stephen Kretzmann, Oil Change International
Brad Johnson, Forecast the Facts
Phil Radford, Greenpeace US
Cherri Foytlin, Bridge the Gulf Project
Tar Sands Blockade 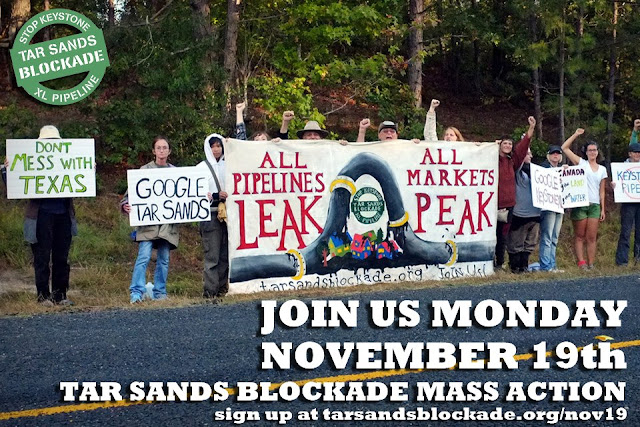 Thanks for the posts. Great Blog.

It definantly needs to be stopped. The Gulf of Mexico is in a horrible way as you know, and sending that dirty line towards the Gulf coast is a recipe for well should I dare say disaster. Our earth is at her limit. I believe we better turn all this around and try to heal our planet, instead of sucking her dry.