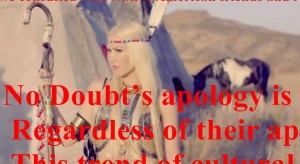 If Gap’s recent “Manifest Destiny” t-shirt, Urban Outfitter’s Navajo panties, and the hipster fetish of wearing headdresses weren’t enough, check out ska-rock group No Doubt’s video for their song “Looking Hot”. The video premiered yesterday replete with nearly every stereotype of Native people in the book. Although the group pulled the video after protests, you can still view it here: http://www.slack-time.com/music-video-15474-No-Doubt-Looking-Hot.
No Doubt’s apology is hollow. They state that their intention “was never to offend, hurt or trivialize Native American people, their culture or their history.” Let’s be clear: No Doubt is a commercial rock group promoting a single and their intentions were to profit from a concept they found no objection to throughout the entire production process. No Doubt also state, “we consulted with Native American friends and Native American studies experts at the University of California.” Was the consultation meaningful? Evidently their friends and the scholars at UC need a bit more than a cultural sensitivity lesson.
Regardless of their apology, No Doubt’s actions feed into the growing trend of racist hyper-festishism of Indigenous culture.
This trend of cultural appropriation and callous disregard for Indigenous cultures is no aberration. The fight to address racist stereotypes of Native peoples has been raging for years, from addressing the Cleveland Indian’s mascot “Chief Wahoo” to the Washington Redskins, our struggle is far from over.
If you really want to honor us, support our struggles to protect our lands and culture. No doubt.
~ Klee Benally
at November 05, 2012

If the UC had given them some consultation then they would or should have done a better job of doing so. They are probably the same college professors or students that think Ottawa Canada needs an actual brick capitol building rather than an igloo!