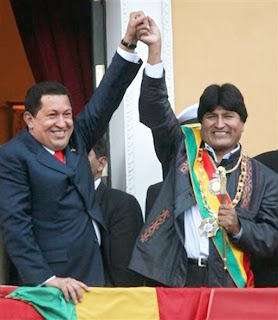 Chavez slams "superelite" that exploits US


Venezuelan president Hugo Chavez on Thursday urged newly re-elected President Obama to "stop invading" other countries and "think about his own country" which suffers from social and economic problems.

Venezuelan President Hugo Chavez speaking about Obama's reelection. Chavez made the comments during a cabinet council meeting broadcast on the state channel, VTV.

"President Obama has been reelected. Hopefully he and his government reflect, first about their country, which, unfortunately, has plenty of economic and social problems," said Chavez.
"It is a divided country... [It has] poverty that grows every day, misery and an elite, a superelite, that exploits the country and society, and even poisons it, tricks it and manipulates it through a media war," he added.
Because of this, Chavez urged Obama to "dedicate himself to governing his own country and stop invading and destabilizing countries."
In October Chavez won his third re-election and vowed to pursue more socialism.
More from Reuters
President Hugo Chavez to President Obama: "He should reflect first on his own nation, which has a lot of economic and social problems. It's a divided, socially fractured country with a super-elite exploiting the people." http://www.reuters.com/article/2012/11/09/us-venezuela-obama-idUSBRE8A80XJ20121109
at November 09, 2012