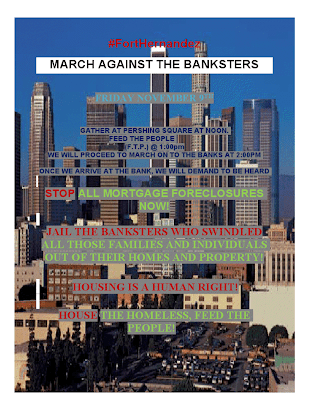 .
in SOLIDARITY with JUSTICE FOR NIKO BLACK 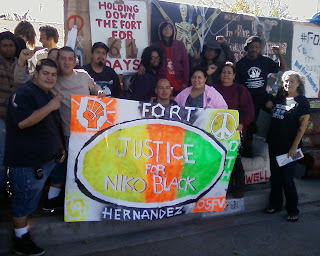 By AIM Southern California
The American Indian Movement of Southern California (AIM-SoCal) called for a day of action against Wells Fargo Bank on Saturday, November 3, to draw attention to the illegal eviction of Niko Black, a terminally-ill Native American woman in Garden Grove, California. The day of action began with a 9am protest at the Wells Fargo Bank branch located at 14211 Jeffrey Rd., in Irvine, where AIM-SoCal, together with affiliated organizations and members of the public demanded justice for Black, beginning with recognition of the court order allowing Black to remain in her home. AIM-SoCal was joined with people in other cities in similar demonstrations demanding Justice for Niko Black in this campain against Wells Fargo.
On October 10, the Orange County Sheriff’s Department forcibly entered Black’s home, ignoring the Federal Court order prohibiting such action, taped to the front door. The court order, written by Federal Judge Theodore C. Albert, allows Black, who suffers from terminal breast cancer, to remain in her home. Despite the ruling, Wells Fargo attorney Jason Burris directed officers to ignore the court order and forcibly remove Black. Sheriff’s Department officers, were noted to having made inappropriate sexual comments, prior to then pointing a gun to the head of the diminutive and frail Black, smashed windows and destroyed a security camera. Officers then held Black outside her home and refused her requests to retrieve her medication and needed medical equipment. Her condition quickly deteriorated, leading to her hospitalization, against the wishes of her doctor- her life being placed more in jeopardy due to a weak immune system.
Niko Black’s case has quickly gained attention with a petition on Change.org (with more than 121,000 signatures as of 11/6) and an article in the Huffington Post. Black’s story is only the most recent account of outrageous and inhuman behavior toward poor and working class people perpetrated by Wells Fargo. Federal Judge Elizabeth Magner best characterized the banks behavior in April of this year: “[Wells Fargo] prefers to rely on the ignorance of borrowers or their inability to fund a challenge to its demands.”
For more information, email aimsocalifornia@ymail.com or visit the following links http://www.youtube.com/watch?feature=player_embedded&v=B793OYIqQ-s
photos-
http://www.facebook.com/media/set/?set=a.10151160765128759.449262.589423758&type=3
http://www.youtube.com/user/occupyforthernandez?feature=results_main&continue_action=ZHTtU8i3bg3FNDpJall_-mTUa-opEeRGrBPSZVN0DjzijLWk4-jeozWSBVHtyG22woeBA2SV5k4pVGrVwjkFHHQcb3QthmkrTKUyfhd7t8Q%3D
More ACTION TO BE ANNOUNCED SOON!
AIM SoCal