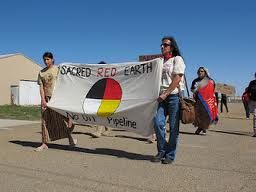 Owe Aku: Halt the lies: Obama does not support UN Declaration on the Rights of Indigenous Peoples
Lakotas send solidarity to Palestine
By Owe Aku International
Lakotas Bring Back the Way
http://www.oweakuinternational.org/Owe_Aku_IJP/Owe_Aku_IJP_Home.html
Censored News
http://www.bsnorrell.blogspot.com
In light of recent comments by some NGOs indicating that the United States is supporting the Declaration and that President Obama's 'proclamation' for Native American Heritage Month further endorses the Declaration without "any qualifications at all" (Andrea Carmen IITC), we felt it is necessary to comment.
These statements are creating an opinion (just as the U.S. would like) that the United States actually "supports" the Declaration. Since this is in fact a lie and gives a false impression of the continuing threat of the United States via its colonial policies to endanger our communities and destroy the environment. Apparently we differ on the idea of "support."


The United States does NOT "support" the declaration. Their "endorsement" is as much a lie as any of the treaties they signed with our ancestors and public posturing is done for the same reasons that reconciliation, Native American heritage month, UN Indigenous Peoples Day, all of this empty symbolism in order to give the appearance that their is some movement in the movement.
Hopefully by now we, as members of Native communities, have learned that without any substance behind the words, without any actions to enforce the treaties, without any commitment to let us participate in the 2014 World Conference on our own terms, without some truth behind the reconciliation, the completely irrelevant posturing of the United States are simply the US continuing to falsely present itself as a denizen of human rights.
To imply that somehow Obama's words have negated their untenable position by saying, "Please note that it reiterates the support (without mentioning “lends” or any qualifications at all) of the Obama Administration for the UN Declaration on the Rights of Indigenous Peoples." But this statement is not true. There are qualifications. The Declaration, its spirit and its intent were gutted by the US State Department in the same way that the pretended participation of Indigenous peoples in the 2014 World Conference has been gutted. To pretend otherwise is a disservice to our communities trying to protect their environment and way of life.


I'm attaching the Black Hills Sioux Nation Treaty Council statement that was done when the US "support" statement was first releases. It lists all of the specific U.S. qualifications, denials, and objections to the Declaration. http://www.oweakuinternational.org/Owe_Aku_IJP/Owe_Aku_IJP_Home.html


Watching the excesses of U.S. colonialism and genocide over the past few days as Israel murders the men, women and children of Palestine without impunity and with the money and weapons of the United States, we are praying for the strength of the people of Gaza. We stand with them in solidarity and a recognition that justice will not be found in the lies we tell ourselves.
at November 18, 2012