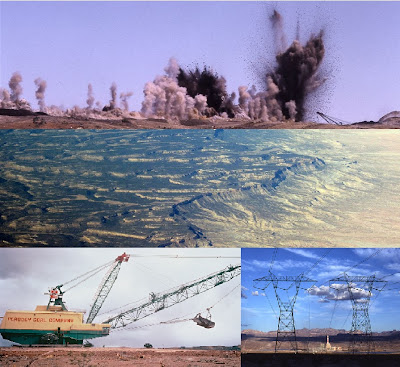 DZIL YIIJIIN' (Black Mesa) is a 4,000 sq. mile Sacred Site and still inhabited by Indigenous Peoples. Great Mountain (Big Mountain) covers 780 sq. miles. The growing Peabody coal mines are not only a desecration/rape of Mother Earth/Genocide but a contributor to global warming and globalized greed.
Sadly, this sacred site is ignored by environmental activism and human rights movements!!!
--By NaBahe Katenay Keediniihii, Interpreter, independent ethnographer and historian for the traditional Dineh of Big Mountain

Also: Bahe Censored on Oil and Gas Desecration in Dinetah

In 2004, while Brenda Norrell was a staff reporter for Indian Country Today, the ICT editor censored the following statement by Bahe. Censored News is the result of the censorship of this and other acts of censorship by ICT.


The following comments by Bahe Katenay, Navajo from Big Mountain, Arizona, were censored and deleted by Indian Country Today in September of 2004. With the Navajo tribal government now pressing for another power plant in this region of Dinetah, Bahe's comments remain vital.


Katenay is responding to the fact that the Bush administration
developed a task force to facilitate industry requests and fast track
requests for drilling. The Bureau of Land Management increased oil and
gas drilling permits by 70 percent since the previous administration.

“Gas reserves are drilled in places where White Shell Woman was found
by Talking God and places where she did her Kinalda (puberty ceremony).
“Places where the Twin Warrior Gods made their divine deeds are also
desecrated with drilling, piping, wells and recreation activities. The
Dine’ have lost these lands and their ‘puppet’ tribal government have
refused to fight for a claim to this area,” Katenay said.

Katenay point out that sacred land is being violated while many Navajos
haul propane tanks in the backs of their trucks for fuel to cook with.
“What would the Christians do if their Holy Lands were dotted with
natural gas pumping stations and strands of pipelines crisscrossed
everywhere?” Katenay asked.

“Then to make things worst, what if these gas reserves were illegally
tapped with permission from a puppet government that is made up of
their own people. Finally, how would they feel if these natural
resources were being bought off cheap from their nation, exported away
to another country and none made available for their use?


“To the Dine', this has happened when our Holy Lands were made
available to gas companies in northwestern New Mexico in a region known
to us as Dinetah.


“Today, several major gas pipelines are routed out towards southern
California. Many Dine’ of course have to pay for the natural gas or
propane from companies that desecrate their Holy Lands. Many Dine'
household do not receive piping so they haul their propane bottles to
the local markets to get them filled.”

Katenay said the place of Dine’ origin, Dinetah in northwestern New
Mexico, still holds ancient archaeological sites and a large portion of
the creation stories related to all geographical features of that area.
Energy development threatens the Navajos’ Four Sacred Mountains,
located in the region from Flagstaff, Ariz., southern Colorado and
northern New Mexico, he said.

“I travel from Black Mesa to these areas when I can. I am disturbed
every time I come back to my Holy Land. I see new drilling and new
roads that scar the wooded mesas and buttes. I always wonder if the
Spirits of our Creators are still alive there. Despite this, I still
get a sense of healing when I look upon Gobernador Knob or Huerfano
Mesa and its surrounding canyonlands.

“But I am also saddened when I think that, because these lands were
given away for profit, the rest of our sacred lands everywhere are
being desecrated, today: Mount Taylor, San Francisco Mountains, and Big
Mountain.”


(In 2004, a report by the Environmental Working Group’s showed the
federal government has offered 27.9 million acres of public and private
land in New Mexico for oil and gas drilling. New Mexico ranked second
among 12 western states for lands currently leased and second for the
amount of land currently producing oil and gas.
San Juan County, the place of origin of Dine’, was among the top three
counties targeted, along with Eddy and Lea counties, according to the
2004 report.)

Mr. Bill Means and Dr. Jose Cuellar were on hand to award Mr, Short with a beautiful blanket provided generously by Pennie Plant and Michael Horse.

Fred has impacted our lives in many ways whether in ceremonies, street demonstrations, work with youth and prisoners, or protecting sacred sites, he has been a model for us and our families to learn from.

MNN. On October 11, 2012, Thahoketoteh of Kanekota filed an appeal motion at the Federal Court to quash Prothonotary Kevin Alto’s illegal decision of October 5. No reason was given forbidding us to appeal. He erred in fundamental jurisdictional law. The Federal Court has to answer us by October 25th 2012.

On October 1, 2012, supporters filled the court room to witness Thahoketoeh presenting oral argument before Aalto. He outlined the history of the 1701 agreement between 48 Indigenous nations and our allies throughout Onowaregeh/Great Turtle Island. All the newcomers’ rights to live here and provide food for their families come from the Two Row Wampum/Guswentha. He held up the wampum belt. “They agreed to abide by its principles and always be of one mind with us on everything concerning the land”. Like us, the land is Indigenous.
The Federal Court admits that the Royal Proclamation 1784 supercedes all admiralty statutes. All laws in Canada are admiralty statutes. They are “corporate by-laws” passed by the officers of the CORPORATION OF CANADA. The Prime Minister, Finance Minister and Leader of the Opposition are officers of this corporation. Their job is to provide ever-growing profits to the shareholders and continue the illusion of freedom to their masses.
The Royal Proclamation confirms this relationship between the Ongwehonwe and the newcomers. Should they break the 1701 agreement with us, everything reverts back to one day before the Guswentha was presented, June 24 1701. The British were presented with the Guswentha in July 25, 1701. They accepted, recorded and confirmed the agreement [Nanfan], by moving to Ontario. These are the only legal international agreements we have with the Crown on behalf of the CORPORATION OF CANADA and their subjects. It’s their passport to live here.
Aalto went against what is carved on the statue in the Federal Court’s lobby at 180 Queen Street West, Toronto. [If it hasn’t been removed]. It states, “This court will never go against a Royal Proclamation or an Indian treaty”.
All Crown agents are bound by their oath to their Queen. Aalto’s decision was in effect a signed confession. Now we are asking the Federal Court to convict its own criminality.

Thahoketoteh asks, “Show us how you got our land legally. Show us a receipt”. The Royal Proclamations of 1763 and 1784, are affirmed in their own constitution. They pledged to “Protect” us from their encroachment on our land forever. He wants confirmation that without a treaty ceding our land, the constitution protects our territorial sovereignty from the newcomers and overrules federal and provincial jurisdiction.
Thahoketoteh continues his job as an Onkwehonwe from Kanionkehaka, to uphold the constitution of the Iroquois, Kaianerekowa”, the law of the land. We all have a duty to represent the interests of all Mohawks, including those faces beneath the ground not yet born.


Gwich'in Sarah James honored as a climate hero by the Atlas Awards in Washington on Oct. 7, 2012


Sarah James participated in Earth Week 2012, and is a native of the Gwich'in tribe from Arctic Village, Alaska. She was awarded the Goldman Environmental Prize in 2002 for her work protecting caribou calving and nursery grounds in the Arctic National Refuge from oil and gas drilling.

The Atlas Awards honor climate heroes for leadership towards more caring and sustainable lives that can ultimately stabilize Earth's climate. This is a brief clip from the inaugural award ceremony October 7, 2012 in Washington DC. GrowthBusters director Dave Gardner was proud to co-host the event. Follow the Atlas Awards at http://www.facebook.com/AtlasAwards
at October 12, 2012 No comments: