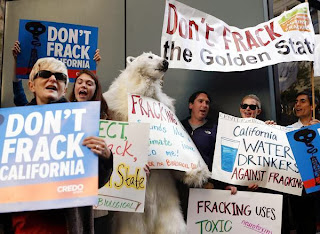 On Thursday, October 17, approximately 200 California residents will be outside Le Parc Hotel in San Francisco protesting the Blue Green Alliance’s honoring of Governor Jerry Brown with its Right Stuff Award. In particular, the protest will focus on Brown’s support for fracking, a massive twin tunnels project and his emissions trading scheme. The protest was organized by a group of individuals unaffiliated with national environmental organizations who were galvanized by Brown’s most recent assault on the environment: the green lighting of fracking in California.

“Jerry Brown ignored the majority of Californians and the rank and file of the Democratic Party who support a moratorium on fracking,” said organizer Damien Luzzo. “He signaled that he would not sign any of the moratorium bills and only signed the already weak SB4, after he gutted it at the 11th hour at the behest of Big Oil.”

According to organizer Lauren Steiner, “When I worked on Jerry Brown’s presidential campaign in 1992, he was an uncompromised environmentalist. Now he will support any industry, including polluting ones, if he thinks it can bring jobs and tax revenues. In 1992, the old Jerry Brown limited his campaign contributions to under $100, so he wouldn’t be beholden to special interests. The new Jerry Brown has accepted $2.5 million over the past few years from the oil and gas industry.”

At the rally, Steve Ongerth, founder of the IWW Environmental Caucus, will talk about how he and some Earth First!ers founded what became the BGA in 1998 and how far the group has strayed from its original purpose.

Pamela Zuppo, from the San Francisco chapter of 350.org, will speak on Brown’s support of fracking.

Michael Preston, from the Winnemem Wintu Tribe, will speak out against the peripheral tunnels and Shasta dam raise that will cause massive fish extinction and destroy the whole Bay Delta Estuary just to divert water to Big Ag and Big Oil.

Tom Goldtooth, from the Indigenous Environmental Network, will urge Brown to reject REDD+ carbon trading credits, which allow corporations to grab huge swaths of land in developing countries in order to keep polluting at home, usually in low income neighborhoods populated by people of color.

Hezekiah Allen, former Executive Director of the Mattole Restoration Council, an organization committed to community-based watershed protection and restoration, forest protection, and water conservation, will talk about how progress in renewable energy can get us off fossil fuels today, if only political leaders like Jerry Brown had the will to do so.

The final portion of the program will be the reading of a list of groups and individuals who should have received an environmental award this year instead of Jerry Brown. These include:
• Holly Mitchell, who introduced a strong fracking moratorium bill in the state legislature and LA City Council members Paul Koretz and Mike Bonin, who recently introduced a fracking moratorium motion in Los Angeles;
• Mark Jacobson, from Stanford University, who has developed a plan to power California with 100% renewables by 2030;
• The Center for Biological Diversity and Earthjustice, whose lawsuit halted fracking in public lands in California;
• Truthout, the on-line publication whose investigative reporting uncovered fracking off the California coast;
• The Coalition to Decommission San Onofre, whose tireless work led to the shutdown of this dangerous nuclear power plant;
• State Senator Lois Wolk, a tireless opponent of the Bay Delta Conservation Plan, whose recently signed bill SB43 allows customers to get more than 20% of their power from renewables;
• The Klamath Justice Coalition, a coalition of members of Indian Tribes and activists who have helped stop fish kills and fought for dam removal on the Klamath River;
• The California Sportfishing Protection Alliance, which has filed hundreds of successful lawsuits and complaints compelling industry, agribusiness, cities, counties and  water boards  to comply with the Clean Water Act; and
• Richmond Mayor Gayle McLaughlin, who has waived residential solar permit fees, initiated a solar thermal rebate policy and a green jobs training program, sponsored  Green Building and Compostable Food Ware ordinances and helped negotiate a $114 million settlement with Chevron.
---------
The Blue Green Alliance, presenting the award, is co-chaired by Leo W. Gerard, International President, United Steelworkers, Co-Chair and Michael Brune, Executive Director, Sierra Club, Co-Chair
----------
Also see Sheep Dog Nation Rocks: Dine' John Redhouse 'Red Truth, White Cover-up'
http://sheepdognationrocks.blogspot.com/2012_04_01_archive.html