Nineteen-year-old David Mazerolle of the Mi'kmaq Warrior Society describes how Mi'kmaqs were denied all their rights in jail and placed in solitary confinement after police brutally attacked the anti-oil and gas drilling camp in Elsipogtog, New Brunswick.

A second Mi'kmaq Warrior, Mi'kmaq Warrior Chief Jason Augustine, said he was repeatedly kicked in the head by police while down and diagnosed with a concussion.

“I was kicked in the head three times when I was taken down,” Augustine told APTN. “I wasn’t resisting arrest, I had my hands behind my back, and this one RCMP started bashing my head in.”

David Mazerolle describes the treatment in the Moncton jail in this video. "I was one of the six that got left in there."

"They left us in there with no blanket, no bed."

"After we got split up and put in solitary confinement, my buddy Aaron, as he was being transferred, got beat up while he was in handcuffs."

"We were just constantly in that hole."

The Mi'kmaq Warriors were denied toilet paper and toothpaste, and access to the phone and attorneys.

David appealed for help for the four Warriors who remain in jail. "They are not allowed to call out."

"Help the Warriors that are still in there because they are not being treated right."

The Canadian police, RCMP, and heavily armed snipers with attack dogs stormed the peaceful anti-fracking camp at Elsipogtog on Oct. 17, 2013. Mi'kmaq women and elderly were abused and pepper-sprayed. At least two Mi'kmaqs were shot with rubber bullets. Fourteen people were arrested.

Update from APTN: Second Mi'kmaq Warrior beaten after arrest: “I was kicked in the head three times when I was taken down,” said Augustine. “I wasn’t resisting arrest, I had my hands behind my back, and this one RCMP started bashing my head in.”
http://aptn.ca/pages/news/2013/10/31/mikmaq-warrior-society-members-say-beaten-roughed-arrests/

Support jailed Warriors at Moncton Courthouse, Friday, Nov. 1, 2013 at 9 am 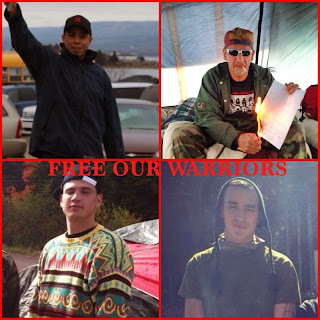 Friday, Nov. 1, 2013, Moncton Courthouse
TO THE MI'KMAQ PEOPLE AND SETTLERS LIVING ON THE LAND
LET US JOIN TOGETHER IN UNITY TO SHOW SUPPORT FOR OUR PROTECTORS.

Time for the United Nations to get involved! This is outrageous!

UN is useless and worse. It's time for people to ban together and help the Warriors. If you can contribute to their legal fees ... if you can't spread the word and show solidarity!

Has anyone started a fund for a legal defense team for attorneys for these people? This is outrageous! It's a violation of basic civil liberties. Even a dog is given better treatment when thrown into the dog pound! I would request any lawyers who specialize in Environmental Law & if possible have knowledge of Aboriginal Law as well. I'm in Niagara Falls, NY but am with you all in this fight for justice to protect the land & waters.

http://www.gofundme.com/4v80u4. To donate to the defense fund

http://www.gofundme.com/4v80u4 to donate to the defense fund