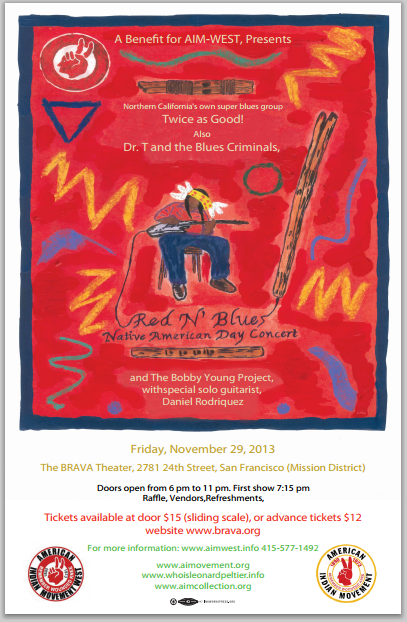 Friends and relations of AIM Grand Governing Council, I wish to also extend an invitation for you to participate at our annual AIM West Coast Conference, or summit, starting on Monday and Tuesday, November 25 and 26, at the California Institute for Integral Studies in San Francisco (on Mission between 10 and 11 St).

The conference will be held from 9-6 pm daily. Don’t forget we also host an annual feast, Unthanksgiving Dinner, Wednesday, November 27, where the Eagle meets the Condor, at the Baha’i Center, 175 Valencia Street. Thursday, November 28, is the annual Sun Rise gathering at Alcatraz Island. Try to stay for our 2nd Annual Red and Blues Concert, Friday, November 29, at the Brava Theater, in the Mission.

Firstly, we assemble to hear reports from delegates or representatives with pressing issues from various regions. The general information and empirical data delivered to the august body is to further provide an analyses to reach common ground, and to strategize and conclude certain resolutions together for change.  Other topics will include useful information on issues, resource, development and networking, use of the media, funding sources and sustainability, and other relevant data.  While other topics may be covered or on-going, the focus is on where and how to apply tactics for leveraging power, with a human rights based approach.

Another topic may include a critical review of whether the UN Declaration on the Rights of Indigenous Peoples, adopted by the UN General Assembly in 2007, is being applied and implemented on the ground, with transparency, or is the political will lacking on the part of governments; and what alternatives plans or or is there a parallel conference during the United Nations hosting a special plenary in New York, September 2014 for world's Indigenous peoples? An international report will also be a part of this presentation.

Other national topics for discussion may be the review of the US Indian Child Welfare Act (ICWA) of 1978.  The recent Supreme Court Decision with regard to the Dustin Brown case literally throw the ICWA under the bus! And how Dustin's daughter was found not allowed to be with him, will be discussed.  A report may be provided by advocates on what or how to amend the Act, or next steps, for the ICWA to be taken seriously and prevent further abuse and theft of our children by the law.

The attention or traction generated by the use of Indians as mascots in baseball and football in the news media recently, coupled with activism and attention given by major media networks, including the US President himself speaking against discrimination in sports, and with petitions circulating on the internet should not be overlooked.  Indeed, we should take advantage to harness the energy and focus on a catalytic moment to have a face to face approach with those responsible parties.

These are just some of the huge topics that require our attention. Perhaps you have some concerns for us to consider on the agenda?  Please send them to me.  Mark your calendars now!  We are low budgeted and limited on how best to provide assistance to guests and delegates from out of town.

AIM members, chapters, affiliates, friends, allies, and public who support the rights of Indigenous peoples to self-determination are all invited to come and contribute your ideas. A continental breakfast and a lunch will be provide with community support.

Additionally, plan to stay for our annual UN-thanksgiving feast/dinner and cultural program to be held on Wednesday, 27th from 12 to 6 pm, at the Baha'i Center, 175 Valencia St. San Francisco.  Thursday, November 28 is the annual Alcatraz Sun Rise Gathering at pier #33 (4 am!)

And finally, for the second year, a benefit for AIM-WEST, on Friday, November 29, Native American Day, the annual Red n Blues concert! And back for another performance our headliner "Twice as Good" also with "Dr. T and the Blues Bandits" including the Bay area's own "Bob Brown Project" all at the Brava Women's Center for the Arts, 2781 24th Street in San Francisco.
Tickets on sale at www.brava.org

Thank you for your attention, see you soon, all my relatives!