TODAY! (Above) VIDEO Bahe of Big Mountain speaks about the attempt of Peabody Coal and the Bureau of Reclamation to have a secret meeting. Bahe speaks of the need for the traditional way of living and sustainable living.
........................... 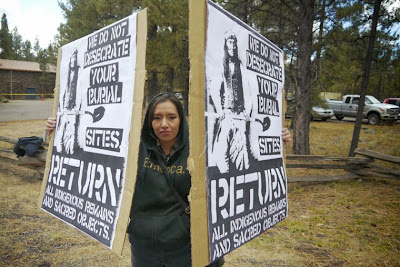 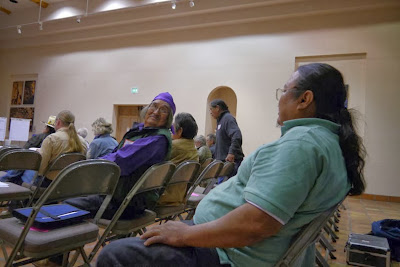 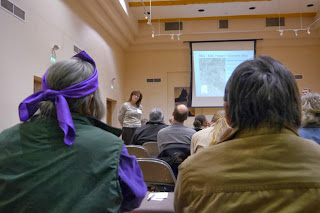 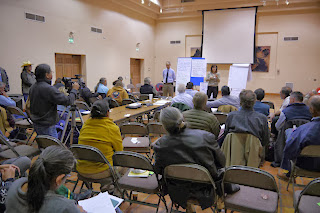 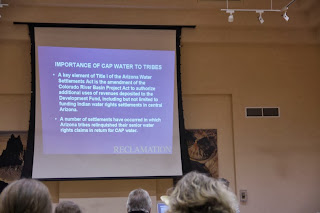 When Peabody Coal seized the land at Black Mesa for the dirty coal industry -- with the aid of corrupt attorneys, Arizona Congressmen, tribal politicians and the media -- Peabody Coal robbed the burial places and looted the cultural items of Dine' and Hopi. The coal mining and the power plant that brought destruction and disease was to provide electricity for non-Indians in the Southwest. Today, Hopi and Dine' told Peabody Coal, the state of Arizona, and the US government, that this cycle of misery and exploitation ends now.


FLAGSTAFF, Ariz. -- The first Cultural Review meeting for the Kayenta Mine Navajo Generating Station Permit by the Arizona Bureau of Reclamation was held today, Oct. 30, 2013.  It is the first of meetings to develop critical structure for regulation and implementation of the protection of sacred sites in the mining and expansion areas leased by Peabody Energy.
Peabody Coal and the Bureau of Reclamation made it clear they did not want input from traditional Dine' and Hopi.
At the end of the session today, Bahe of Big Mountain said there was much more to be said. Bahe said he raised his hand and was ignored. If he had been allowed to speak, this is a portion of what he was prepared to say.
"Archaeology must include the participation of the last remaining traditionally, minded indigenous consultants in excavation programs and projects.
"Archaeology needs to have a self realization that they have instituted a narrowed minded application of science that is outdated. For example, to only use a standard that indigenous ancestry in the Americas began at 10,000 years ago and that, all other indigenous interpretations about their past are merely myths.
"Remaining intact archaeological sites that are in the path of proposed strip coal mining must remain undisturbed and all parties including the utility companies need to have proper over-sight reviews. All Black Mesa Archaeology Project materials need not be sold and be immediately turned over to the proper tribal entities and that, Peabody Coal Company must begin funding programs that can allow tribes to process their own histories and to make them available for future learning."
Bahe was organizer of the protest. He said earlier, "With more community interest and support, Peabody can be stopped from desecrating more of the endless network of ancient dwelling sites. The less involvement by communities, the more Peabody and their archaeologist (Black Mesa Archeology Project) will steal and profit, because cultural and human rights of the antiquities aren't being enforced."
"The remaining intact sites and other withheld properties, which all total in the thousands, are being downsized into Lots. The resources are sold at basement values and with price fixing scams, while bragging about this mining operation as if it is some great blessing to the Tribal economies."
The protest is intended to highlight the absence and removal of any public process attached to the regulatory and legal protection of intact and removed ancient sites that are being found curated in collections.
Concern has been growing due to recent revelations that Peabody Energy withheld and restricted documentation and research that pointed to the relocation of millions of Indigenous remains, artifacts, and sacred objects called the "Black Mesa Archaeology Project" (BMAP).
More than one million remains and items of cultural significance are currently being held in cardboard boxes at universities.
"BMAP's transfer was initiated before the Native American Graves Protection and Repatriation Act (NAGPRA) was created and when many of today’s tribal leaders were children," according to Brian Dunfee of Peabody Energy.  It wasn’t until after the permit was issued that confirmation of the "collection" was formally announced at the true locations and facilities.
NAGPRA was established in 1990 and requires, "federal agencies and institutions that receive federal funding to return Native American 'cultural items' to lineal descendants and culturally affiliated Indian tribes and Native Hawaiian organizations."
To date, there has not been an inventory conducted of the BMAP "artifacts" that complies with current laws regarding protection of Indian "artifacts.”
BMAP includes 1.3 million "artifacts" currently held at two American universities.
According to Jon Czaplicki, an archaeologist with the Bureau of Reclamation, the Cultural Review and Update Meeting CRUM extends its range from December 22, 2019 only and does not address the excavations and disruption of intact sites by Peabody in prior years.  No one seems to answer where these artifacts and funerary properties would be held after that time, and if they would be separated from their sister and brother collections or the intact sites endangered in the Kayenta Mine lease with Navajo Generating Station.
Participants of the rally are also calling for leadership, solidarity and participation led by Traditional Indigenous Peoples to discuss the impact that the exclusions by Peabody Energy has on true restoration and repatriation.