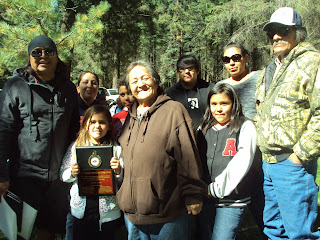 Article and Photos by Sandra Rambler

Dzil Nchaa Si An, AZ – While the pine and ponderosa trees stood tall and firm with a cool breeze in the air, on Saturday, Sept. 28, tribal elders were joined by Peridot District Councilman, Wendsler Nosie, Sr., and prestigious leaders from various organizations as they gathered to pay tribute on top of Dzil Nchaa Si An, also known as Mount Graham, to honor San Carlos Apache tribal member, the late Phillip Cassadore and his sister and tribal member, Ola Cassadore Davis, the late Michael Davis, the late Keith Basso and the late Peter Warshall, all whom actively fought to prevent destruction and desecration of sacred sites on Dzil Nchaa Si An. 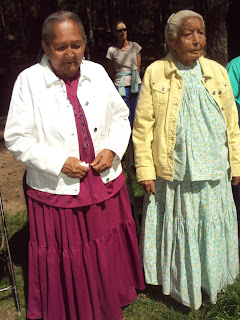 The memorial tribute began with an opening prayer by spiritual leader, Gladys Hinton accompanied by Audrey Johnson and immediately following the luncheon, all those present gathered in a large circle.  The tribal elders stood in the center of the circle.  Songs were sung by spiritual leaders and tribal elders, Arthur Longstreet, Wheeler Grimes, Sr., Adam Rope and Belmont Jordan.  Guests and friends from Europe, Germany, England and Italy and from the United States were present.
“We are gathered here today to pay our respects to those who stood before us and helped paved the way to protect our sacred sites and for restoring our spirituality to what it is today,” pointed out Councilman Nosie.
“A lot of time, dedication, commitment and prayers were extended by our late spiritual leaders, the late Phillip Cassadore and Ola Cassadore Davis and her husband, Mike Davis and those that helped along the way, the late Keith Basso and the late Peter Warshall.”
“Ola had talked to us many times and stressed the importance of preserving our Apache culture and to always extend our prayers here on Dzil Nchaa Si An.  Recently, this year, we had a sunrise ceremony for our granddaughter and it was so special because we can exercise our right to freely practice our Apache religion here.  We have our annual sacred runs each year which ends here on top of our mountain and we are teaching our Apache youth about what we were taught.”
“The fight to save our sacred sites doesn’t end here, it continues and now we are fighting to save Chi’Chil’Bagoteel which is also known as Oak Flat.  We are fighting H.R. 687 in Washington, D.C. because Resolution Copper is trying to build a mine there which would destroy a sacred site, destroy the acorn that our people gather and may infringe upon our water which belongs to our Apache people.” 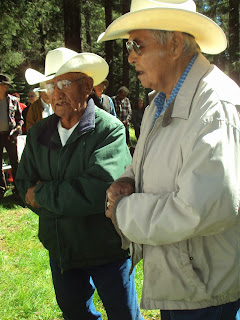