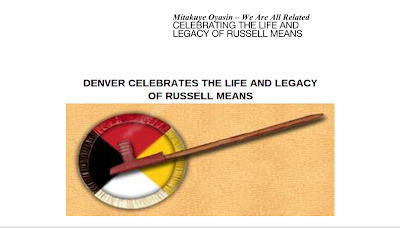 American Indian Activist, Actor And Educator To Be Honored With A Series Of Events In The Mile High City

DENVER -- You may recognize him from such films as Last of the Mohicans and Natural Born Killers, but Russell Means was much more than a face on the silver screen. He was a cultural, political, artistic and visionary American Indian leader, described during his life as “the most famous American Indian of the 20th century.” Means passed away October 2012. This November 7-10, Russell’s family, friends and allies will host Mitakuye Oyasin - Celebrating the Life and Legacy of Russell Means, a series of events in Denver to remember and to honor the vast contributions of Russell Means in both the indigenous and non-indigenous world.


Open to the public events include:

Where: University of Denver, D.U Driscoll Student Center (2055 E. Evans Ave.)
See some of Means’ most famous etchings and paintings during this art exhibition on the University of Denver Campus. There will also be a signing by Russell’s wife, Pearl, of his final book, If You’ve Forgotten the Names of the Clouds, You’ve Lost your Way. For additional information contact Julia Bramante at jmbramante@gmail.com.
Symposium Discussing the Life and Legacy of Russell Means

When: Friday, November 8, 10 am -  3pm
Where: University of Colorado at Denver/ Auraria Campus, Downtown Denver
Tivoli Student Center • Rooms 320 A, B, C
This symposium will examine the complex and multi-faceted life of one of the most important indigenous revolutionary leaders of the 20th and 21st Centuries. Discussion topics will stretch from the battlefield at Wounded Knee to the United Nations to Hollywood.
Panel 1 – 10 am –Noon
The Life and Times of Russell Means: The Good, The Bad, The Real
Video: We Shall Remain: Wounded Knee
Panel  2 -  1-3 pm
The Struggle Continues: The Legacy of the Work and Vision of Russell Means
Days and Nights Film Screening

When: Friday, November 8, 7 p.m.
Where: SIE FilmCenter (2510 E Colfax Ave.)
As part of the Starz Denver International Film Festival, the last film in which Means appeared, Days and Nights, will be screened at the SIE FilmCenter. The film – a modern retelling of Chekhov’s The Seagull – also features William Hurt, Allison Janney and Katie Holmes. A panel discussion will be held after the film. A second film starring Means, Black Cloud, written and directed by Rick Schroder, will be shown on Saturday Nov. 9 at 12:15 p.m. at a to-be-determined location. Tickets will be available through the Denver Film Society.
Gala Fundraising Dinner

When: Saturday, November 9, 6:30 p.m.
Where: Arvada Center for the Arts & Humanities (6901 Wadsworth Blvd., Arvada)
Enjoy an evening of great food and special guest entertainment to promote the creation of the Russell Means Library on the Pine Ridge Sioux Indian Reservation. Utilizing Grandmother the Earth, the natural all green organic state-of-the-art structure will showcase Russell's lifelong contributions.  The library will continue Russell's tireless efforts to educate the public on indigenous and non-indigenous rights and issues through various innovative forms including cutting edge trans-media technology. A VIP reception, sponsored by the Office of Mayor Michael B. Hancock, will begin at 5:30 p.m. Ticket information available at: russellmeanshonoring-denver.com
Russell Means Public Honoring

When: Sunday, November 10, 1 p.m.
Where: Lincoln High School (2285 S Federal Blvd.)Join us for a beautiful Russell Means tribute to include guest speakers, Lakota drum, a 24-minute video piece from "The Russell Means Documentary" and hors d'oeuvres'.


For more information on these events, please visit: russellmeanshonoring-denver.com.