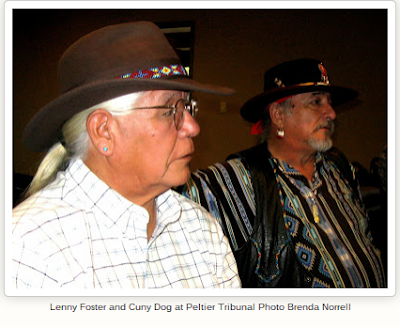 GREEN BAY, Wisconsin -- The Leonard Peltier Tribunal on the Abuse of Indigenous Rights began the second day with the AIM song, and a memorial tribute by Bill Means, Lakota, to Raymond Yellow Thunder, Lakota, who was beaten to death by whites in South Dakota. 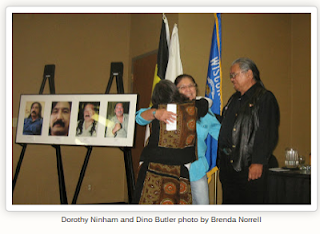 Dorothy Ninham said the prison in Florida has made it very difficult to visit Peltier. When Peltier was in Lewisburg, he was told that someone sent him money, a silver note, from Europe.

Peltier sent it to Ninham. "They confiscated it on the way out. And they said it was a reason to search his cell." The person on the top bunk had wired his radio to a light bulb. "When they went into search Leonard's cell, they found the wires."

One of the guards pulled on it and said he had been shocked. Peltier was charged and was given sixty days in solidarity confinement and transferred to another prison.

"They just said he was guilty and had him in the hole." There was no air circulation, and the temperature would reach 120 degrees or more.

"Several days he couldn't even make it, he was so weak." 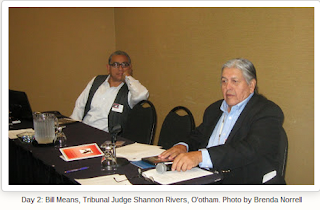 At Coleman prison, they took away his medication for high blood pressure and diabetes, saying the prison had to save money. "The doctor told him his blood pressure was out of control, and diabetes was out of control." Still, he was only given half of his medications and no way to test his blood sugar. He had arthritis and pains in his back and knees. Sometimes the prison doctors are just in and out in five minutes.

"When he went to the doctor, he was told that he was a candidate for a heart attack." His blood pressure and blood sugar was out of control.

There is nothing fresh or healthy, it is laced with sugar or fat, even in the visitor's room, she said.

Some of the obnoxious guards even try to keep the visitors on edge. Visitors also must go through metal detectors. "I think they just choose who they want to humiliate them."

Now, Peltier is at the opposite end of the country from his family. He is in Florida, and his family at Turtle Mountain in North Dakota. He should be placed in a middle security prison at this point, she said. 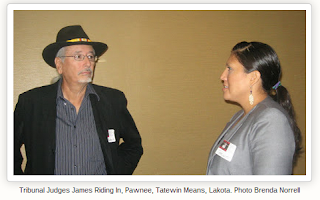 "It is not an easy thing, they don't make it easy by any means." Ninham said Peltier is not getting the care he needs to have. Peltier said one inmate had a heart attack and they just let him lay there without any help. In one prison, Peltier was attacked by five inmates and the guards just stood there and watched it happen.

The process of visiting Peltier is a long one. If you have a record, or visit inmates in another prison, you can not visit. You have to have known him before he went into prison to visit him. As well, Peltier approves his visitors.

Responding to the Tribunal Judges questions, Ninham said it is difficult now for Peltier's attorneys to consult with him because of travel and distance. If documents are sent, the documents may be delayed for two weeks or more.

During surgery once, Peltier almost bled to death.

"He doesn't get family visits very often, because they are so far away and it is so unaffordable." 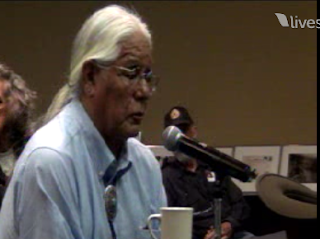 Lenny Foster, supervisor for the Navajo Nation Corrections Project, has been a spiritual adviser to inmates in state and federal prisons nationwide for 32 years.

Foster has witnessed the racism and discrimination in prisons. The religious freedom struggle in prisons is one of the difficult human rights struggles.

The purification ceremonies are constantly under attack in the prisons. They are isolated, with sensory deprivation, deprived of fresh air and sunlight.

"In the 32 years that I've worked with the prison system in the US, it is the most cruel and unusual treatment in the United States."

Foster has taken these issues to the United Nations in New York and Geneva, as well as to the US government officials in DC, to no avail.

Foster joined the American Indian Movement in Denver under the leadership of the late Vernon Bellecourt. They took a drum into prison for inmates. Then, they went into Stillwater prison for a ceremony. Those experiences convinced him to become involved in prisoner rights. He made a proposal to the Navajo Nation to work with inmates, with Heart of the Earth of AIM.

Foster submitted the proposal to Navajo President Peterson Zah and it was accepted. He has continued for 32 years. The access of inmates to herbs, sweetgrass and sage, and singing and drumming are issues that are a struggle in the prisons. Prison officials said drumming and singing would get inmates 'riled up.'

"They don't understand that concept."

Scheduling becomes an issue and the prison officials exercise control. There are always threats to inmates of "being written up and sent to the hole."

Young Natives in prison need to learn their songs, and many need to be taught about prayer. "We resort to litigation and lawsuits. It is very difficult to win. The First Amendment doesn't provide that protection."

"It is psychological warfare to take away dignity when you are incarcerated."

Foster said he knows the ways of the Sweatlodge and Sundance and can teach the songs and prayers. "It is important for survival."

Foster said he knows Peltier as a model inmate, friend and brother, who he sundanced with. He is considered a friend, a brother. Foster has known Peltier for 26 years and is a brother, a relative.

"I would like to see the National Congress of American Indians take a more active role in his release, and executive clemency."

NCAI has passed a binding resolution. Now, NCAI needs to set up a meeting with Obama's administration and Attorney General.

"When I used to visit him in Leavenworth, the chaplain made it very difficult for me to visit." The chaplain would follow Foster around.

"Peltier is experiencing bad conditions from diabetes, he needs to walk, fresh air, and fresh vegetables, they are not giving him that."

"I feel they want to kill him, and want to let him die in prison."

"When I see him, he says, "Lenny you need to help me, I'm going to die in here." Peltier is not afraid to die, but wants to spend his remaining years with his grandchildren and family.

Foster encouraged people to urge others to write letters. He has contacted the Navajo Medicine Men's Association to help.

The US could do the right thing, and make amends with the Native American people.

"Leonard is an example of the resistance. We love him, and we miss him."

Since his arrest, Peltier has been harassed and abused by the FBI and Bureau of Prisons.

Smith said, "Leonard is so high profile that all the shots were called by the Dept. of Justice, FBI."

On June 27, the day after the anniversary of the deaths of the FBI agents, Peltier was placed in solidarity confinement in Leavenworth, in temperatures of 120 degrees.

With Peltier's health problems, Smith said the question was: "Do they want him to die? They are giving him the death penalty by leaving him in that environment."

Peltier had received money from someone in Scotland, and this led to a search of Peltier's cell. In the previous weeks, the occupant of the top bunk was responsible for the wires on the light fixture.

Peltier wasn't even in his cell when the guard received that shock.

Smith said people have to stand up to the injustice. "There's so many good things he can accomplish."

"If we don't do something right now, Leonard will die. Then, the blood is on our hands as a people," Smith said.


John Privatera, Peltier's attorney in Canada, asked that the government of Canada address the injustice and join the effort for Leonard Peltier's release.

Privatera, testifying by Skype, said Peltier's attorneys are finalizing a petition for executive clemency to President Obama. Already, Peltier has received a resolution of support from the National Congress of American Indians.

Privatera said Peltier's legal team is working with the government of Turtle Mountain Indian Nation to work with Peltier once he is released. Further, he said that the legal team is asking for Indian Nations to come together and support Peltier.

With a united effort by Indian Nation, President Obama can be asked to release Peltier based on a sovereign nation requesting the release of an inmate imprisoned by another nation, he said.

"He is not a young man, he is not healthy," Privatera said. "We need him to come home."

Privatera spoke on the rule of law and the forced and unlawful testimony which resulted in Peltier's wrongful conviction and extradition.

Earlier this year, Privatera made a public appeal for clemency.

"Mr President, we appeal directly to you. As a legal scholar, you know that article two, section two of our constitution is one of the strong threads in the fabric of our justice system. It is a responsibility born by the executive. It embraces the power to deliver justice, to exercise mercy, and to be wise in that law given power."

"This is an historic opportunity, Mr. President, to infuse your legacy with soulfulness and wisdom"

"We ask only that you commute the sentence of Leonard Peltier. No further findings have to be made. Commute him after thirty seven years of imprisonment. You have clemency power to say, and we ask that you do it now, that justice has been served by time, sir. And it's time to return Leonard home to his community to work and die on Turtle Mountain."

Privitera said, "Mr President, this case cries out for mercy. It is time to reveal and exercise your power and wisdom judiciously and we plead today that you commute Leonard Peltier's sentence. Be merciful. Be wise. Use your power. Bring Leonard Peltier home."

After lunch, Peter Grant, attorney in Vancouver, British Columbia, testified via Skpe before the Peltier Tribunal. Grant has been at the forefront of the legal struggle of Aboriginal Peoples in Canada and involved with the Peltier extradition.

Peltier Tribunal judges questioned Grant on the details of the extradition of Peltier from Canada to the US and misconduct on the part of the United States.

Grant said the testimony of Myrtle Poor Bear was proven to be coerced and untrue. Further, the evidence involving the rifle used in the shootings of the FBI agents could not be proven.

"The only basis of the case against Leonard was gone," Grant said, when asked about the rifle shell casings and firing pen used in the killing of the two FBI agents.

Earlier today, the documentary, "I am Indian Voice, Leonard Peltier" was shown during the morning of the second day of the Tribunal. It is being held at the Radisson at Green Bay, Wisconsin, on Oneida Indian land.

In 1972 Raymond Yellow Thunder, Lakota from Porcupine, S.D., was brutally murdered in the bordertown of Gordon, Nebraska. When Yellow Thunder's relatives sought justice, they found none.

"They stripped him from the waist down and they took him into the American Legion Hall on Saturday night dance," Means said. "They told him to dance Indian."

Raymond Yellow Thunder's feet were burned with cigarettes. "They beat him to death and they found him two days later in a trunk of a car. Nobody would help him."


The Tribunal is being streamed live by Earthcycles.


Watch live streaming video from earthcycles at livestream.com
..
at October 03, 2013

an innocent man being treated like garbage.......when this incident happened even the FBI said that Peltier could not have done it.....so why is he there..............