Terrance Nelson 'Wars will be fought over water' Elsipogtog Momentum

"Wars will be fought over water" 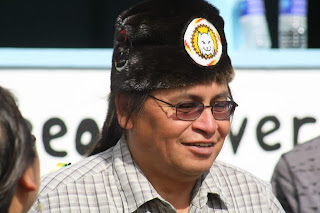 Good Morning Brenda:
Twenty-three years ago during the OKA Crisis, Prime Minister Brian Mulroney, (Conservative Government operating during the summer while parliament was recessed) used 4000 Canadian Soldiers to confront the Mohawks and his lead statement consistently spoke of the rule of law. What the current Prime Minister of Canada Steven Harper is doing is the same thing and the Canadian media is playing up the burning RCMP cars in an effort to get Canadians on side with the RCMP and the "rule of law". Problem is that was 23 years ago, back then, they didn't have Censored News and they didn't have the Internet messaging. There is worldwide support for the Mi'Kmaq and the issue is water, the right of people to defend their water and their future generations who will need that water long after the shale gas has burned away.

Nearly forty years ago, an elder from Oklahoma was on tour in my home province of Manitoba. In 1977, Philip Deere chose to stay at my house rather than stay in a motel. He and I talked. He told me, in your lifetime, you will pay more for water than for gasoline. I was 24 years old at the time. He also told me, I don't know if you will see it but in the future, wars will be fought over water. Philip Deere had an overwhelming commitment to youth. He was an exceptional speaker. You will find Philip Deere's picture at the United Nations in Geneva. He was part of AIM, and he toured in Europe. I once heard him speak for two hours to an audience, not once did the audience fidget or get bored, that's how great a speaker he was. If only he had the Internet.
In 1977, we didn't have cell phones or Internet but the elders prepared the youth for the future, one youth at a time. In 2013, it is now our job to prepare the youth for the future. The youth must understand economics. What is happening in Mi'kmaq territory is just the beginning of wars over water. The Internet allows us to reach out to the world with what the elders have told us. Prime Minister Harper has his media mouth pieces like Ezra Levant to toe the party line, to push the rule of law. Using the Internet, the message is getting out there. See the following link to see what is being said in the UK.
http://www.theguardian.com/environment/2013/oct/21/new-brunswick-fracking-protests
The world has changed drastically in the last forty years. Governments, elected or not do not control the economy. Super rich do not adhere to the rule of law. Until we recognize who is in charge, we stand little chance of regaining control of our own destiny. With shale gas, the United States will no longer be held hostage to Arab oil. There is economic reasons for the United States and Russia to form an alliance. Europe will be held hostage to gas and oil like never before. There is huge economics behind the recent signing of a NAFTA like agreement between Canada and Europe. In Elsipogtog First Nation, the only visible thing is the police and the people, not what is behind it. American big business supports the police and the governments of Canada to enforce shale gas exploration.
https://mail.google.com/mail/u/0/?tab=wm#inbox/141df31057e6615b
The Strategy going forward
Go to New York
The Chief of Elsipogtog First Nation has asked for calm and a cooling off period of 30 days. This is a mistake. In 30 days, Elsipogtog will have lost the momentum. In 30 days, it will have lost the attention of the world. Now is the time to go to New York. In the cc, I have provided the email address of two people who are the leads for the Mayor of New York. Mayor Michael Bloomberg is one of the super rich and contributed $50 million to Sierra Club. The largest environmental group in the United States, Sierra Club has taken a position in support of the Elsipogtog First Nation and its blockade of shale gas. The position of Sierra Club may not be the position of Mayor Michael Bloomberg.
Michael Rubens Bloomberg (born February 14, 1942) is an American business magnate, politician and philanthropist. He is the 108thand current Mayor of New York City, having served three consecutive terms since his first election in 2001. With a net worth of $31 billion, he is the seventh-richest person in the United States[1] and the thirteenth wealthiest in the world.[2]
http://en.wikipedia.org/wiki/Michael_Bloomberg
Mayor Michael Bloomberg is the first Jewish Nobel Prize Winner. Israel is the strongest supporter of Mayor Bloomberg and the mega news media giant that Bloomberg heads.
In 1990, the Cree of James Bay paddled down the Hudson River. The action to take the message to New York forced economics into the open. Electricity created by dams in northern Quebec powered up New York and the eastern seaboard. It was and is American money that finances the dams in Canada. The environmental damage in northern Quebec was opposed for over twenty years before the 1990 trip to New York, all efforts prior to 1990 were without any success on the part of the First Nations. As long as First Nations continue to stay in Canada with their message, the message falls on deaf Canadian ears.
http://indiancountrytodaymedianetwork.com/2013/01/24/idle-no-more-youth-show-strength-cree-culture-900-mile-frozen-trek-ottawa-147221
First Nations going to New York will force Bloomberg to take a position, it forces Americans who buy Canadian exports to question their purchases. If you want to support the Mi'Kmaq Warrior Society email, John Levi at willi@web.ca. Get the inside information and support the groups that will travel worldwide with the message that Phillip Deere carried. In the future, Wars will be fought over war.
Brenda, you are having tremendous impact, many other people are on this issue because of the sacrifices that people like you are making. There is no money to be made on activism but you are protecting the future generations just like Phillip Deere did.