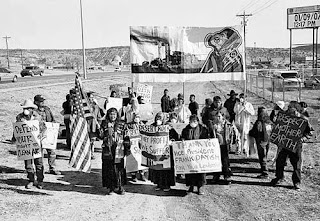 ATTENTION Navajo citizens! What: Press Conference in front of Navajo Nation Council Chambers in Window Rock. AZ
When: 10:  October 16, 2013
Who: Impacted Navajo citizens and Diné CARE
Why: To inform the people about the uncertainty, risks, and liabilities on the purchase of the Navajo MineCome out if you can and spread the word!
While Navajo politicians continue to press for more dirty coal energy, Dine' push to halt the legacy of death and disease from coal mines and coal-fired power plants, the most polluting industry on the planet and on the Navajo Nation.
In the news:
Kathy Helms reported in the Gallup Independent that Navajo and other groups have asked the U.S. District Court in Colorado to set aside the U.S. Office of Surface Mining Reclamation and Enforcement’s approval of an expansion of Navajo Mine and remand the matter to OSM with instructions to prepare an Environmental Impact Statement.
"Diné Citizens Against Ruining Our Environment, San Juan Citizens Alliance, Sierra Club, Center for Biological Diversity and Amigos Bravos – represented by the Western Environmental Law Center – have challenged OSM’s National Environmental Policy Act analysis of the Area IV North Permit Revision Application, calling it 'arbitrary and capricious.' BHP Navajo Coal Co. and the Navajo Nation are intervenors for OSM."


Karen John: Why I am against the purchase of the Navajo Mine
http://www.daily-times.com/farmington-opinion/ci_24307046/letter-i-am-against-navajo-nation-purchase-bhp
Posted by Censored News, publisher Brenda Norrell at October 15, 2013