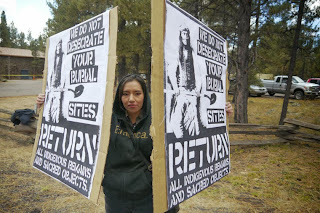 By Brenda Norrell
Censored News
Photo by Indigenous Action Media
FLAGSTAFF, Ariz. -- When Peabody Coal seized the land at Black Mesa for the dirty coal industry -- with the aid of corrupt attorneys, Arizona Congressmen, tribal politicians and the media -- Peabody Coal robbed the burial places and looted the cultural items of Dine' and Hopi.
The coal mining and the power plant that brought destruction and disease for Navajos and Hopi, delivered electricity to non-Indians in the Southwest. Today, Hopi and Dine' told Peabody, the state of Arizona, and the US government, that this cycle of misery and exploitation ends now.
Vernon Masayesva, Hopi of Black Mesa Trust, told a Cultural Review session today, “The grassroots people now are awake. They know the regulations. They know the laws.”
“We are no longer going to be silent,” said Masayesva, promising that the questions of grassroots people would guarantee that the process of completing an environmental impact statement for Peabody Coal on Black Mesa would be delayed.
The first Cultural Review meeting for the Kayenta Mine Navajo Generating Station Permit by the Arizona Bureau of Reclamation was held today, Oct. 30, 2013.  It is the first in a series of meetings for regulation and protection of sacred sites in the mining areas leased by Peabody Energy.
Bahe Katenay, Dine’ of Big Mountain, said scientists attempted to have a secret meeting today without notifying grassroots and traditional Dine’ or Hopi.
“The threat is the elimination and erasing of our history, all of that is being withheld from us.”

“We are going to have a broken link if that happens.”

Bahe said archaeologists are hiding historical information from the Dine’ people. “They still consider us savages and barbaric people. These attitudes are institutionalized.”
Norman Benally asked the Critical Review session what would happen if the people of the US had their cemeteries bulldozed. Among those present at the review were the Bureau of Reclamation and Peabody Coal representatives.
Bahe pointed out that Peabody Energy withheld and restricted documentation that pointed to the relocation of more than one million Indigenous items taken from Black Mesa. The Black Mesa Archaeology Project, which includes 1.3 million so-called "artifacts," currently is being held in cardboard boxes at two American universities.
Photos and videos by Klee Benally and Indigenous Action Media in Flagstaff:
http://www.bsnorrell.blogspot.com/2013/10/photos-peabody-coals-theft-from-black.html
For permission to repost this article: brendanorrell@gmail.com
at October 30, 2013