Peltier Tribunal Findings include holding FBI agents responsible for crimes, freedom for Leonard Peltier and an end to environmental racism 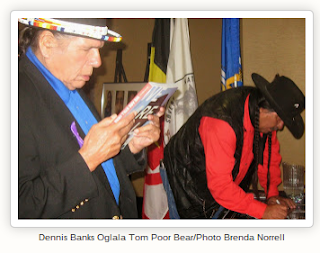 The Tribunal concluded that US laws must be changed in order for FBI agents to be charged for their crimes of assault and murder on Pine Ridge Indian land in South Dakota and elsewhere. Further, the Tribunal said justice is dependent on the immediate release of Leonard Peltier.

The Tribunal said justice depends on the admission of guilt and systematic change regarding the FBI and their crimes against the Lakota Oyate and other Indigenous Peoples.

"In order for the Lakota Oyate to begin the healing process, the FBI must begin with a Statement of Remorse to the Oglala Lakota Oyate of Pine Ridge Indian Reservation."

The Tribunal said the environmental injustices targeting Indian lands, based on racism, must end.

In the findings, the judges said, "This Tribunal is a proceeding in democracy, justice, and human rights. The case of Leonard Peltier goes beyond his oppression. Leonard Peltier has become an icon for the oppression and injustices practiced by the United States historically and persistently upon Indigenous Peoples."

"Justice for Leonard Peltier can begin a healing process long overdue between Indigenous Peoples and the United States of America," the findings stated.

The Tribunal focused on the historic relationship between the Dakota, Lakota and Nakota people and questioned who has jurisdiction on Lakotas' Pine Ridge Indian land in South Dakota. The Tribunal questioned whether Congress can override treaty obligations using Plenary Power, the findings stated.

Further the Tribunal questioned whether the Fort Laramie Treaties of 1851 and 1868, or Lakota Traditional Laws have been violated during the period of 1868 to present, including the 1973 Wounded Knee stance, the 1975 Pine Ridge Shootout, and the trials that followed these incidents, the findings stated. 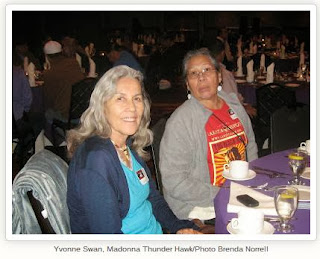 During the Tribunal, Oct. 2 --4, on Oneida land in Wisconsin, the Tribunal heard testimony from across Indian country, including testimony from the survivors of the Pine Ridge Shootout in 1975 and survivors of Wounded Knee in 1973. They described the Reign of Terror carried out by the FBI and how the US government armed locals with weapons and ammunition who then targeted Lakotas and the American Indian Movement. The US created a militarized zone at the same time corporations were seizing Lakota territory for uranium mining.

Navajo Lenny Foster testified on Native prisoner rights. Foster and Dorothy Ninham described their visits with Leonard Peltier in prison and his failing health. Peltier called the Tribunal from prison on the first day.

Manny Pino, Acoma Pueblo and professor, testified on the genocide carried out by Cold War uranium mining in the Pueblos, Navajo Nation, Spokane, Lakota lands in South Dakota, and First Nation lands in Canada. Pino described how the US government targeted Indian lands as "sacrifice zones" which left a trail of death for Native American uranium miners who were not given protective clothing, and ate the radioactive food. Dakota historian Chris Mato Nunpa from Minnesota testified on the historic genocide of Dakota people.

The Tribunal concluded that the remedies include the immediate freedom for Leonard Peltier. The options are a new and fair trial consistent with due process, executive clemency or compassionate release.

The Tribunal called for the appointment, by the President of the United States, of independent counsel to review and prosecute all murders, assaults and acts of intimidation by all perpetrators, including the FBI, against the Lakota Oyate of Pine Ridge Indian Reservation.

Further, the Tribunal said that the restoration of criminal jurisdiction in Indian country requires overturning the Major Crimes Act of 1885, and its associated amendments, and the Suquamish v. Oliphant Decision of 1978.

In its findings, the Tribunal listed the international human rights standards which have been violated during the pre-trial extradition, detention, trial process and incarceration of Leonard Peltier.

The Tribunal also made the following preliminary findings and conclusions.

Describing it as "egregious US government misconduct and abuse of power," the Tribunal said the US has continued its genocide against Indigenous Peoples in the US through actions, laws and policies.

The Constitutional violations include the violations of the Fort Laramie Treaty of 1851 and 1868, the Webster-Ashburton Treaty of 1842; fundamental right of due process; right to a fair and impartial jury of his peers; sixth amendment right regarding compulsory processes; religious land use and institutionalized persons act of 2000, and free exercise and establishment clause.

The violations of international law include violations of Fort Laramie Treaty of 1851 and 1868; UN Declaration on the Rights of Indigenous Peoples (2007); UN International Convention on the Elimination of All Forms of Racial Discrimination (ICERD) signed in 1966 and ratified in 1994; the UN International Covenant on Civil and Political Rights (ICCPR); the Universal Declaration on Human Rights (1948); and Wester-Ashburton Treaty (1842).

The Tribunal said justice depends on the repeal of the Doctrine of Discovery, Plenary Power Doctrine, and other "Extra Constitutional Fictions by the Supreme Court."

In conclusion, the Tribunal recommended that the findings be submitted to the National Congress of American Indians. 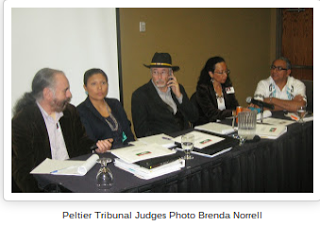 The judges said this is the first of this type of Indigenous Peoples Tribunal and the complete detailed Findings would follow.

Thank you Alice Holemans at NAIS Gazette for translating Censored News coverage of the Peltier Tribunal into Dutch! NAIS also has coverage of 'plastic shamans' charging for ceremonies in Europe. http://www.bloggen.be/natam/ 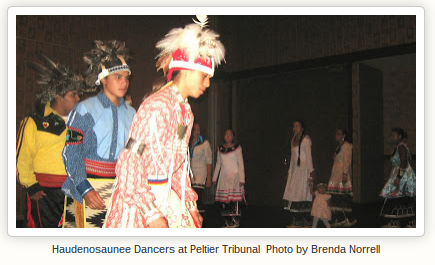 My spirit has been uplifted by the Peltier Tribunal, I watched most of it although there were a few technical problems. I wonder is it possible to send my documents of the BIA corruption who has set up and empowered a Puppet Government to protect the BIA & EPA from violating federal laws while Dick Wilson type of Indians punish the traditional families living on the Rez. I hope the Judges would also hear our long standing case! My only concern is with NCAI who did not allow California dis-enrolled members to even address them at their conference in California! "All My Relations"