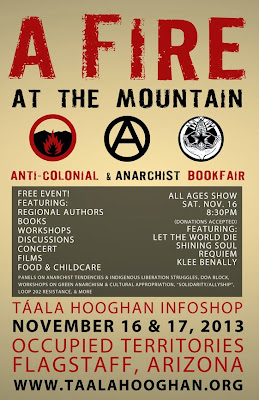 Please contact us if you need housing:
Contact: afireatthemountain@gmail.com
Facebook event: https://www.facebook.com/events/511036342317464/
The book fair will be located at Táala Hooghan Infoshop at 1704 N 2nd St Occupied Territories Flagstaff, AZ.
(East Flag just off of Route 66 near 4th st.)
View Larger Map
Admission is free to all book fair events.
Limited parking at the infoshop is available, you can park around the neighborhood as well.
We will be providing free food. Snacks throughout the day and dinner on Saturday and snacks and lunch on Sunday.
We will also be providing free childcare at the infoshop.
We maintain accessibility as a priority though we do not have the most adequate facilities (bathrooms aren’t too big but a large wheel chair can fit through most all of our space). Please let us know if you need additional accessibility while at the book fair.
Space safety and security:
We intend on doing our best to ensure that the space we hold is a threat to all forms of oppression and oppressive behaviors (read: hetero-patriarchy/homophobia/sexism/settler-colonialism/white supremacy/racism/age-ism/ableism). There will be infoshop collective members and AFTM book fair organizers available if there are any issues, but we welcome you to assist us to make sure to have each other’s backs. We do not welcome drugs/alcohol in our space and ask intoxicated folks come back when they’re sober.
Schedule and Workshop Descriptions:

WORKSHOP: “Card Weaving”
Presenter: Alex the Weaver
Sunday | 10am | Infoshop
Card (or tablet) weaving is an ancient form of technology for weaving straps. Some materials will be provided, but if you can please bring yarn.
PRESENTATION: “Anarchist – What We Need To Be”
Presenter: John Zerzan
Sunday | 10:30am – 11:45am | Community Space
John Zerzan is an anarchist and primitivist philosopher and author. His works criticize agricultural civilization as inherently oppressive, and advocate drawing upon the ways of life of hunter gatherers as an inspiration for what a free society should look like.
Some books he’s written are Elements of Refusal (1988), Future Primitive and Other Essays (1994), Running on Emptiness (2002), Against Civilization: Readings and Reflections (2005) and Twilight of the Machines (2008).
DISCUSSION: “Decolonization & Anarchism: Historical Interventions”
Presenters: Drew
Sunday | 10:30am – 11:45am | OYBM Screening Room
WORKSHOP: “Anarchist Strategies Against the Police”
Presenters: Tucson Anarchist Black Cross
Sunday | 12pm – 1:15pm  | OYBM Screening Room
Tucson Anarchist Black Cross will facilitate a discussion on how anarchists can better integrate an explicitly anti-police analysis into radical social movements, particularly no borders movements and movements for prison abolition. We’ll briefly examine recent uprisings against the police throughout the U.S. while considering the specific circumstances here in Arizona. As those of us working with Tucson ABC do not claim to have any particular expertise, grand vision, or ideal solutions, we only hope to open up space for conversation and strategizing. Fuck the Police.
WORKSHOP: “Spiritually, Green Anarchy and Cultural Appropriation”
Presenters: Marc Jackson & Jamie McCabe
Sunday | 12pm – 1:15pm  | Community Space
PANEL: “A Discussion on the Diné, O’odham, Anarchist Bloc”
Presenters: O’odham Solidarity Across Borders Collective, former Phoenix Class War Council, & Taala Hooghan Infoshop
Sunday | 1:30pm – 3:30pm  | Community Space


In January 2010 more than 200 people took to the streets responding to the following call that was made for a united Diné, O’odham, anarchist/anti-authoritarian bloc at an anti-Arpaio march in Phoenix, AZ: “We are an autonomous, anti-capitalist force that demands free movement and an end to forced dislocations for all people. We challenge with equal force both the systems of control that seek to occupy and split our lands in two as well as the organized commodification of every day life that reduces the definition of freedom to what can be produced and sold where and to whom, and compels our social relations to bend to the very same pathetic formula of production and consumption. Capital seeks to desecrate everything sacred. We hold lives over laws and human relations over commodity relations.” Full statement: http://firesneverextinguished.blogspot.com/2010/01/call-for-dine-oodham-anarchistanti.html


Please share this link at Censored News
http://bsnorrell.blogspot.com/2013/11/anarchist-bookfair-schedule-taala.html
at November 14, 2013