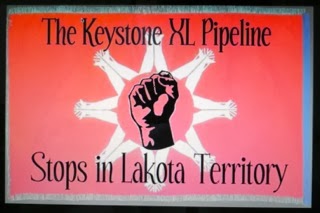 On November 13, 2013, tribal members of the Cheyenne River Sioux Tribe, acting as agents for Transcanada in order to sell-out the homeland to the Keystone XL Pipeline, brought Keystone representatives to the reservation.  Here’s what happened:

“You’re already compromised, we know your names, we’ve seen you, what you did here tonight, selling us out for money, that’s shameful…  Corporations work this way to divide communities, to divide neighborhoods… The rest of us are going to be strong together for Unci Maka”
Debra White Plume to the sellouts and the representatives of the deadly Keystone XL Pipeline.

“If you are going to be amongst us and be one of us don’t ever, ever bring these guys amongst us!”
Tatanka Agli Win to the sellouts who brought Keystone reps to Cheyenne River.

As seen in this video clip from the Lakota Media Project, the powerful Lakota Winyan ensured that the Transcanadians quickly left Lakota Territory by literally escorting them out the door and into their cars.  The end of the clip shows the clearly shaken wasichu heading quickly for the door and it’s a pleasure to watch.

“Run home and tell your corporate headquarters in Canada that the Lakota are going to make a stand.  Tell them, you’re going to have to run over them or throw them in jail.  That’s the message you have to take home… So I think you need to leave our land!  We’re ready to go to jail to get you out of here NOW, so you can leave on your own or be escorted out now…”  Debra White Plume, Owe Aku.

Owe Aku International Justice Project - To donate to Owe Aku’s efforts to bring non-violent direct action training to the communities of the Lakota Oyate and our allies as well as the Lakota Media Project who diligently record these efforts, please visit our website at:  www.oweakuinternational.org.  Feel free to email us at oweakuinternational@me.com.

Our family are descendants from Aotearoa not New Zealand and just wanted to share our support in the stand that your Lakota people are continuing to make. Thanok you for sharing your journey.