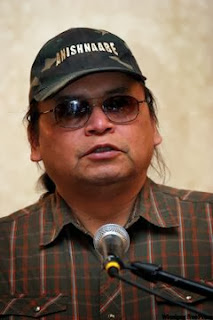 Hey Dennis,
Remember last year, October 6, 2012. The Winnipeg Sun had me on the front page pictured with Iranian president Mahmoud Ahmadinejad under the Caption, Dumb and Dumber. Dumb under President Ahmadinejad and Dumber under my picture.
You and I went to Tehran at a time when United States and Israel were threatening to bomb them.
We asked a lot of Chiefs in Canada if they would be willing to travel to Iran. We ended up the only ones that would go on short notice. Before we went to Iran, you, Ken Whitecloud and I went to Toronto to visit a mosque, the largest in Toronto. We spoke to fifteen hundred people of the Crusaders, the same ones that still control our people today.
Yesterday the United States signed a deal with Iran that will lead to the lifting of sanctions.
Houston will jump on this. They want Iranian oil. Americans will benefit.
In the meantime, the dumb ones will be Calgary oil guys who will be kept back by Steven Harper.
The Conservative Government shut down the Iranian Embassy in Ottawa shortly after we visited the Iranian Ambassador. Chief Orville Smoke, Chief Frank Brown, you and I went into the Embassy and we made the commitment to visit Iran.
When we met with the Ministry of Oil in Iran, I asked the question, How much is the cost of production per barrel of oil. Remember their answer.
The Iranian Embassy in Ottawa remains closed.
Congratulations are in order for the Iranian people. They deserve to be free of threats. They went through the horrors of war in the eight year Iraq/Iran war.
While the Iranian sanctions maybe lifted, we as indigenous people will continue to suffer under artificial poverty.
The Iranians are a good people, they said, we will remember our friends. No one can be as bad as the British who signed treaties and forgot their promises.
I hope that the Chiefs in Canada understand that as sovereign nations, they have a right to make their own foreign policies, they don't have to have Ottawa determine who to make alliances with. Iran is a leader not only in NAM, the 120 Non Aligned Movement but in OPEC as well.
It is a good day.
http://www.presstv.com/detail/2012/10/15/266854/canada-told-aboriginals-not-to-visit-iran/
Nineteen media outlets in Europe were shut down six days after we were in Iran. Press TV was no longer allowed to be seen in Europe. The people in the west are not allowed to hear the truth about indigenous people or about Iran.
The cuts to indigenous funding by the Harper Government will take full effect in April 2014. It is sad that our Chiefs aren't reaching out to nations that can help, they continue to stop in Ottawa, begging Harper.
Terrance Nelson