No Vote on the Oak Flat Land Exchange Bill 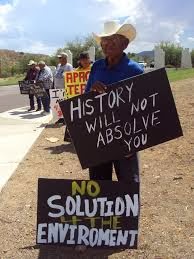 WASHINGTON -- On Nov. 13, Arizona Congressman, Paul Gosar (R-CD 4), was forced to pull H.R. 687 from the floor of the House of Representatives with a “no vote” for the second time on the Southeast Arizona Land Exchange Bill, which includes Chi’Chil’Bagoteel (Oak Flat), an area considered sacred by the San Carlos Apaches and other indigenous peoples.
For the past nearly eight years, the San Carlos Apache Tribe has passed tribal resolutions, coupled with the National Congress of American Indians (NCAI) opposing the construction of a large copper mine just miles away from the western boundary line within the Gilson Wash District on the San Carlos Apache Reservation.
Traditional and holy ceremonies have been held since time immemorial as well as the Apaches gathering acorn which is stored for the winter season.
“This is great news for us,” said tribal elder and spiritual leader, Gladys Hinton, in her native San Carlos Apache language.
“Just last month, we went to Chi’Chil’Bagoteel for a prayer ceremony to ask our Creator Usen to bless our tribal leaders as they were in Washington, D.C. fighting against this bill that would destroy land that is sacred and holy to us.”
“That mine would require a lot of water and we don’t want anyone tampering with our water because that belongs to us and our future generation.  We have already been pushed around and we got struck with this little land that we live on and now the federal government will take more away from us if we just sit back and do nothing about it.  That’s why I speak up and I say my prayers each day.  I pray for all of our tribal members because we are more powerful when we stand united.”
“We were so happy when we got a message last month, from our former Tribal Chairman, Wendsler Nosie, Sr., who is now the Peridot District Councilman, when he was able to have our U.S. President recognize our fight against the land exchange and made contact with him.”
“Now, we are waiting to hear from our tribal leaders, Council members Wendsler Nosie, Sr., Jonathan Kitcheyan and Tribal Chairman, Terry Rambler, as they went to visit with our President Barack Obama about the land exchange bill and other issues.”
“It’s really nice to know for me as a tribal elder, that our tribal leaders have put the San Carlos Apache Tribe back on the map.  People know who we are and they know our fight against the mine for that Resolution Copper Mine to try to do something to what is sacred and holy to us.”
“It tells me that our voices and prayers are heard.   We, the Apaches, we are fighters and we don’t give up, we fight to the end.  I pray for each of our Tribal Council and the Vice-Chairman and our Chairman because they represent us.”
During last week, various tribal leaders were in Washington, D.C. for a Tribal Leaders Summit which includes over 560 federally-recognized tribes in the Country that lobbied with their congressional leaders assisting the San Carlos Apache Tribal leaders in their efforts to have the bill pulled off the floor.
Meanwhile, in an editorial by the Eastern Arizona Courier from Safford, Arizona, posted on Oct. 16, read, “Lately, we find it hard to argue against the San Carlos Apache Tribe when it comes to land.  We don’t have the historical knowledge of the area to know for certain Oak Flat is or is not a sacred place of religious significance for the tribe, which is the crux of the tribe’s argument against a proposed land swap between the federal government and Resolution Copper for development of a new mine.”
“But we can say that the treatment of Native Americans throughout the history of the United States has been deplorable.  We’ve removed hundreds of thousands of people from their homelands, placed them on reservations, taken away those reservations (because of oil and other minerals) and moved them to even worse places, all in the  name of ‘progress.’
“We’ve created a population of a million people dependent on the “largesse” of the federal government for sustenance, whose only hope of progress is profits from legalized gaming, which statistics show can bring higher crime and addictions to gambling, alcohol and other substances.  As if alcoholism on reservation wasn’t already an epidemic.”
“Don’t get us wrong, we’re strong supporters of economic development.  When we get face time with a politician at any level, we always ask about what’s being done to spur job creation in the rural areas.  That’s why we don’t think that the Resolution Copper land swap is a bad thing.  Development of the mine will put hundreds—maybe thousands—of southeastern Arizona residents to work.  Residents who need a good paying job to support their families.”
“But maybe it’s the renewed focus on the nickname of the Washington, D.C., football team that has stirred our conscience.  Or maybe we realize that the greatest nation on the Earth has not acted great when it comes to its first inhabitants.”
“So, in balancing the good—new jobs—against the bad—the continued dismissal of the concerns of Native Americans—we believe that the land swap should be put on hold until the concerns of the San Carlos Apache Tribe can be fully investigated.  And if the tribe is right and the land is sacred, an alternative needs to be found.  Because that seems to be the right thing to do.  For once.”


Gladys Hinton, concluded, “When it comes to threatening to take what is holy and sacred to us, including our water, we won’t let that happen.  For as long as I am here, I will continue to stand up for what I believe, what I was taught while I was growing up from our elders and speak up about it.  My father, the late Jeff Longstreet, was an Apache Mountain Spirit Dancer and their spirits dwell within Chi’Chil’Bagoteel as well as on top of our other sacred mountains like Dzil Nchaa Si An (Mount Graham).   And the Apaches just don’t give up, we are well known for that.  Arizona Congressman, Paul Gosar and Arizona Congresswoman, Ann Kirkpatrick who keep introducing the same bill should just give up because we will never give up!”

hi i am 4th possibly 5th generation clifford raised under the protecting shadow of the majestic Dzil nchaa si an. i have been doing my best to spread the word about holy and special our mountain is i have even been training my mind and toungue to forget mt graham and acknowledge Dzill nchaa si an as its proper name. my only concern is my pronunciation (dzill (d tsil) nchaa (nn cha) si (c) an (awn) i tend to speak the words with my gut more than mouth almost pushing the n then releasing the chaa. i do not wish to anger the gaahn (even though my family is white i was raised to respect crown dancers and to never question the reality of gaahns and to respect there home)so i want to say it right for i beleive any mispronunciation to be most disrespectful to the gaahn who have always shown me the path i should take (which is nt always the easiest path) i can be texted at (928) 224-1743 and emailed at truechuucin@gmail.com i would very much appreciate anytips on how to say the mountains true name without sounding like a drunk hillbilly also (n this will sound weird) i want to help i have always been attached to the mountains energy to its mood an although the mountain has been sad over the tumorous growth on its shoulder the man in the mountain has in no way givin up he calls to me but i know not wat i can do