Indigenous Elders: No time left to defend the Earth 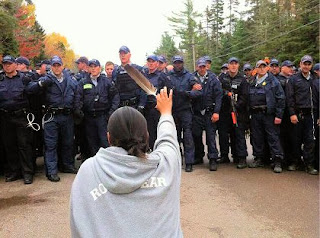 Indigenous Elders and Medicine People said there is no time left to defend the Earth, while Amnesty International said Canada is to blame for a police attack on Mi'kmaq defending their land from from fracking.
Chief Arvol Looking Horse, Lakota, with a Council of Indigenous Elders and Medicine Peoples, issued a statement saying mankind can no longer ignore the teachings to protect the Earth. The Indigenous Council described the destruction that has been created by man and is now out of control, including Fukushima and fracking in North America.
In a second statement, Amnesty International said Canada is to blame for the violations of international laws and human rights which resulted in a police attack on Mi’kmaq in a peaceful anti-fracking camp where Mi'kmaqs were defending their land.
In the first statement, the Indigenous Council said, “We, the Original Caretakers of Mother Earth, have no choice but to follow and uphold the Original Instructions, which sustains the continuity of Life. We recognize our umbilical connection to Mother Earth and understand that she is the source of life, not a resource to be exploited. We speak on behalf of all Creation today, to communicate an urgent message that man has gone too far, placing us in the state of survival.”
“We warned that one day you would not be able to control what you have created. That day is here. Not heeding warnings from both Nature and the People of the Earth keeps us on the path of self destruction. This self destructive path has led to the Fukushima nuclear crisis, Gulf oil spill, tar sands devastation, pipeline failures, impacts of carbon dioxide emissions and the destruction of ground water through hydraulic fracking, just to name a few. In addition, these activities and development continue to cause the deterioration and destruction of sacred places and sacred waters that are vital for Life."
In the second statement, Amnesty International Canada said the RCMP attack on the Mi’kmaq anti-fracking camp on Oct. 17 in Elsipogtog would not have happened if Canada had adhered to international laws and human rights standards, including the UN Declaration of the Rights of Indigenous Peoples, Canada’s own laws and Treaties.
Amnesty released the statement with the Canadian Friends Service Committee and Canadian Ecumenical Justice Initiatives, which said, “ .. this clash could have been avoided had the province acted in a manner consistent with its obligations to respect the human rights of Indigenous peoples under Canadian and international law.”
Canadian police, RCMP, accompanied by police dogs and snipers, attacked the camp and abused and pepper sprayed women and elderly.
Nineteen-year-old David Mazerolle of the Mi'kmaq Warrior Society describes how Mi'kmaqs were denied all their rights in jail and placed in solitary confinement after police brutally attacked the camp.
A second Mi'kmaq Warrior, Mi'kmaq Warrior Chief Jason Augustine, said he was repeatedly kicked in the head by police while down and diagnosed with a concussion.
“I was kicked in the head three times when I was taken down,” Augustine told APTN. “I wasn’t resisting arrest, I had my hands behind my back, and this one RCMP started bashing my head in.”
David Mazerolle released a video statement after his release from jail. David describes the treatment in the Moncton jail. "I was one of the six that got left in there."
"They left us in there with no blanket, no bed," the nineteen-year-old said.
"After we got split up and put in solitary confinement, my buddy Aaron, as he was being transferred, got beat up while he was in handcuffs."
Southwestern Energy, SWN, of Houston, has targeted the land of the Mi’kmaq with hydraulic fracking in New Brunswick, Canada. Southwestern Energy has already been sued in Pennsylvania and Arkansas for releasing carcinogens into the water during fracking and causing cancer.

Mi'kmaq in Elsipogtog said a Sacred Fire blockade will begin at noon on Monday, Nov. 4, 2013, to blockade SWN fracking.

"The Elsipogtog community and the people of the Mi'kmaq nation are responding to SWN's stated intention to resume shale gas exploration in New Brunswick. Community members and traditional people will come together to light a Sacred Fire to stop SWN from passing, in order to ensure that the company cannot resume work to extract shale gas via fracking. The Sacred Fire will last a minimum of four days and is supported by the Mi'kmaq people and the community of Elsipogtog. This comes as part of a larger campaign that reunites Indigenous, Acadian and Anglo people," Mi'kmaq said in a statement late Sunday.
The Indigenous Council said future life on Earth is threatened.
“The Fukushima nuclear crisis alone is a threat to the future of humanity. Yet, our concern goes far beyond this single threat. Our concern is with the cumulative and compounding devastation that is being wrought by the actions of human beings around the world. It is the combination of resource extraction, genetically modified organisms, moral failures, pollution, introduction of invasive species and much much more that are threatening the future of life on Earth.”
Read Indigenous Council’s statement
http://bsnorrell.blogspot.com/2013/11/indigenous-elders-and-medicine-peoples.html
Read Amnesty International’s statement
http://bsnorrell.blogspot.com/2013/11/amnesty-international-canada.html
Read more about abuse of Mi’kmaq Warriors in custody
http://bsnorrell.blogspot.com/2013/10/mikmaq-warriors-denied-all-rights-in.html


Please share the link for this article
http://bsnorrell.blogspot.com/2013/11/indigenous-elders-no-time-left-to.html
at November 02, 2013

This sickens me to no end. When will enough be enough? NEVER!

The god of the garden can point out that the god of the pearly gated community behind the cloud has a long red tail and loves gold and precious things.