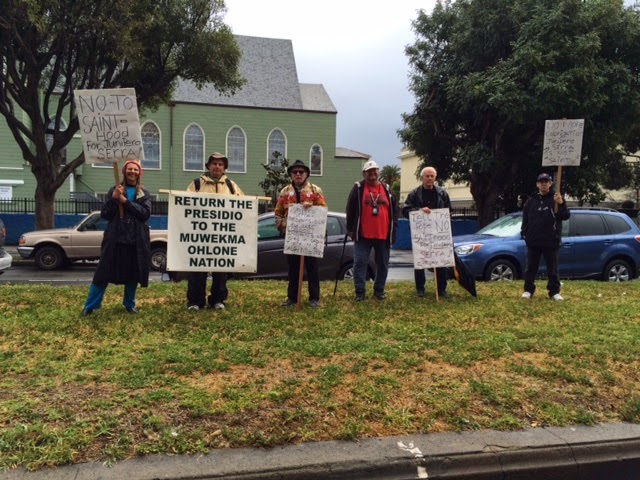 AIM high!
By Tony Gonzales AIM West
Censored NewsJunipero Serra is/was no Saint!  The Pope is Wrong!AIM-WEST stands with our relations today in Carmel Mision by the sea.Today will strive to do this rally at this time near a California (21) mission whether Serra is made Saint or not, and to pray and honor those who are buried on or near each mission while under enslavement, 62,000 alone documented, and perhaps 100,000!  Come rain or shine!!!  Call out the masses!Read the book, "A Cross of Thorns" by Elias Castillo, with introduction by Valentin Lopez, California Chairman of Amah Mutsun nation.
This cannot go unchallenged!!  Mother Earth is our Mother and saint of all our relatives!All things start small, like the flutter of the wings of a butterfly, a revolution has begun...AIM supporters standing in front of SF Mission Dolores Sunday, April 5, 2015 to protest the Popes decision to make a Saint of Junipero Serra.

AIM-WEST to hold rally in SF Mission Dolores in opposition to Canonization of Friar Junipero Serra!  NO Pasara!

Greetings to you.  As you are aware the Catholic Pope Francis last January announced that he will canonize to Sainthood Friar Junipero Serra (known for California’s 21 missions) in September, upon his next trip to the US.  The announcement surprised, and left many California Indian nations, and peoples in disbelief, indeed, across Indian land, much to their dismay.

On Sunday, April 5, 2015 from 10 am - 12 noon AIM-WEST, in lieu of many friends and relations not able to attend an organized rally in Carmel Mission in Monterey, is a San Francisco inter-tribal human rights based community organization, wishes to extend an invitation to friends and supporters to join with us in a rally to oppose the Sainthood of Friar Junipero Serra by bringing attention to our concerns to La Mision! at Mission Dolores, 320 Dolores Street/16th.

The public, and media are also welcomed to join the occasion and learn more about this dark period in California's history from an Indigenous point of view, during the establishment of the 21 missions by the Spanish.  Come and engage with inter-tribal peoples in solidarity with the rally to say together "No to Friar Junipero Serra a Saint!”  and also in opposition to the advancement of the Doctrine of Discovery, the Catholic Papul Bulls that ordained their right to colonization.  For example, in 1493 Pope Alexander VI issued a law granting Spain’s dominion over all lands that Columbus had located.

A recent well documented book written by former San Jose Mercury writer, Mr. Elias Castillo, titled “A Cross of Thorns” the Enslavement of California’s Indians by the Spanish Missions” clearly exposes this period in terms of the deaths, torture, beatings on a daily bases, with impunity.  The tragedy of the decimation of entire Indigenous nations under the leadership of Friar Junipero Serra, responsible for the deaths of approximately 100,000 California Indians and the complete extermination of many Native tribes, futures and languages during the establishment of these missions/presidios, and left many California Indian nations that survived with historic trauma, generations of oppression and pain, and should not qualify such a person to Sainthood and this must be challenged,

AIM-WEST also encourages all our relations and communities throughout California to consider a similar demonstration or solidarity rally and lend support with other California Indian nations who also oppose the canonization of Friar Junipero Serra, at or near one of the 21 missions listed below.  The links below have all the information and history in each mission you will need to call the press and media to express your solidarity and concerns regarding canonization, and to draw your own conclusions as well.

As in San Francisco we will hold a quiet inter-faith rally to oppose the Pope’s decision to canonize Friar Junipero Serra in September this year.  We will carry signs and circulate educational material including a letter to His Holiness Pope Francis, by Mr. Valentin Lopez, Chairman of California’s Amah Mutsun Tribal Band.  The media is invited to attend.

In addition, on Saturday, April 11, 2015 from 12-4 pm in San Francisco at the California Institute for Integral Studies (CIIS), located at 1453 Mission Street, (bwtn 10/11th st) a Panel Discussion and Open Forum, also hosted by AIM-WEST, will be held to determine whether the Pope’s intentions are well-served as a liberal and progress religious leader which he is considered, also what is the message here to Indigenous peoples, and or whether a strategy can be composed during the forum by a coalition of Indian Nations, NGO’s, and inter-faith groups find a connection/proposal together to address the Pope’s arrival, and or other alternatives in the process.  A film will be screened “Exterminate Them” directed by Floyd Red Crow Westerman (38 min.)

The Public is invited to both events!

Good People:
Thank you for networking, sharing and communicating.
Please assist me in keeping or readers informed.
With your permission I would like to reprint your articles re: this and future actions.
Rest regards
Rose Davis
Indian Voices
www.indianvoices.net