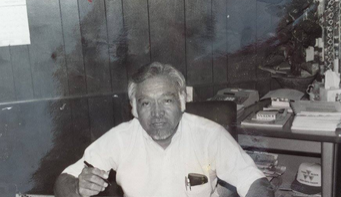 Ned Anderson, Prominent Apache Leader, Walks On At 72
By Tanayia White
Censored News
BYLAS, Ariz. – Ned Anderson, Sr., the 13th Chairman of the San Carlos Apache Tribe in southeastern Arizona, and former President of the Inter-Tribal Council of Arizona, passed away on April 16, 2015.
Anderson, the son and grandson of prestigious Western Apache leaders including John Rope, devoted his life’s work to protecting and enhancing tribal self-governance and tribal sovereignty, and was an influential voice for native rights including the right to vote. He was an ardent defender for self-governance and was an instrumental tribal leader in Arizona and a strong supporter of the Democratic Party.
Anderson received his Juris Doctorate degree from the University of Arizona in 1973. He leaves behind his wife Delphina, 5 children, 18 grandchildren, and 5 great-grandchildren. Chairman Anderson will be held in State at the San Carlos Apache Tribal Council Hall on April 24th. A funeral is slated for the following day April 25th at 1:00 p.m. at the Ernest Stanley Activity Center in Chairman Anderson’s hometown of Bylas, AZ. He will be eulogized as a champion for self-governance, defender of water rights, devoted husband, father, and grandfather. His legacy of leadership and love for the Apache people will ensure his memory lives on.
“Chairman Anderson’s work in negotiating the delivery of Central Arizona Project water continues to impact and benefit American Indian communities today. He worked tirelessly to enhance our water resources and was a brilliant leader. The San Carlos Apache Tribe is deeply saddened by the passing of our great leader” said Terry Rambler, the current Chairman of the San Carlos Apache Tribe.
Donations can be sent to P.O. Box 123, Bylas, AZ 85530. The funds will be used to establish an educational scholarship in memory of Chairman Anderson.
at April 20, 2015