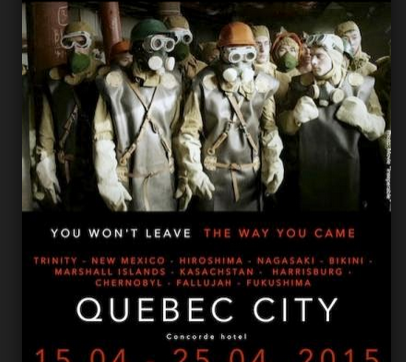 THE CREE NATION KEEPS URANIUM IN THE SPOTLIGHT

QUEBEC CITY, QUEBEC – THE CREE NATION HAS KEPT URANIUM IN THE SPOTLIGHT THIS WEEK, HOSTING THE INTERNATIONAL URANIUM FILM FESTIVAL AND PARTICIPATING IN THE WORLD URANIUM SYMPOSIUM IN QUEBEC CITY. THE CREE NATION’S POSITION AGAINST URANIUM DEVELOPMENT IN EEYOU ISTCHEE, ITS TERRITORY IN NORTHERN QUEBEC, HAS GARNERED SUPPORT NOT ONLY FROM THE PEOPLE OF QUEBEC, BUT ALSO FROM THE NATIONAL AND INTERNATIONAL EXPERTS AND CELEBRITIES GATHERED THIS WEEK FOR BOTH EVENTS.

“WE HAVE ALWAYS MAINTAINED THAT ONCE QUEBECERS LEARNED WHAT THE CREE NATION HAS COME TO KNOW ABOUT URANIUM MINING AND RADIOACTIVE WASTE, THEY WOULD STAND WITH US. THIS PAST YEAR HAS PROVED THIS TO BE TRUE,” SAID GRAND CHIEF DR. MATTHEW COON COME. “WE HAVE PROUDLY PARTNERED WITH THE INTERNATIONAL URANIUM FILM FESTIVAL TO SHOW QUEBECERS THAT THE WORLD STANDS WITH US AS WELL. WE HAVE BEEN VERY PLEASED BY THE TURNOUT AND INTEREST THIS EVENT HAS GENERATED BOTH IN QUEBEC AND AROUND THE WORLD.”

The Cree Nation’s stand against uranium development began in 2008 when junior mining company Strateco Resources applied to the Quebec Government to pursue the Matoush advanced uranium exploration project. Located on the family hunting grounds of the Cree Nation of Mistissini, at the crest of two major watersheds that bring water throughout Eeyou Istchee, the Matoush project was the most advanced uranium project to date in Quebec. The Government of Quebec has since denied the required permit for the Matoush project, due largely to its lack of social acceptability amongst the Cree Nation.
In 2013, the Government of Quebec imposed a moratorium on uranium mining that remains in force, and mandated the Bureau d’audiences publiques sur l’environnement (BAPE) to undertake a review of the uranium industry in Quebec. Throughout the BAPE’s public hearings, Quebecers joined with the Cree Nation to call on the Government to maintain the ban on uranium development. The BAPE is scheduled to deliver its report in May 2015.
“The Cree Nation has been devoted to this cause for many years now. We have fought tirelessly, and have been vocal in our opposition to uraniumdevelopment on our territory,” said Chief Richard Shecapio of the Cree Nation of Mistissini. “Events like the International Uranium Film Festival and the World Uranium Symposium serve to tell the stories of other people – both aboriginal and non-aboriginal – who have been affected by all phases of the nuclear cycle. It has never been more clear that the legacy of uranium development is unacceptable, and we must all do our part to put an end to it.”
Source: Grand Council of the Crees (Eeyou Istchee)
For further information, please contact :
Matthew Coon Come, Grand Chief, GCC
Telephone: (613) 761-1655
Bill Namagoose, Executive Director, GCC
Cellular: (613) 725-7024
Jessica Orkin, Legal counsel
Cellular: (514) 260-2622

FROM RIO DE JANEIRO TO QUEBEC CITY, MISTISSINI and MONTREAL