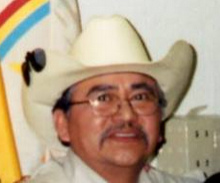 People's right to vote is sacred and sovereign. In August of 2014 people gave a lot of thought, discussions, and prayers to cast their VOTES in the Navajo Nation 2014 Primary Election.
Their VOTES for Navajo Nation President was discarded and made NULL and VOID by the Navajo Nation Chief Justice. Using technicality and POLITICAL maneuvering to DISENFRANCHISE tens of thousands voters.
This caused the chaotic condition we are in now. People (voters) are angry, Five months have passed and we still don't have a newly elected President. Voters are fussing with one another--politicians are putting their heads in the sand and afraid to make decisions for the people who elected them to fight for their RIGHTS.
Now, as if all the terrible things that have been done to us is not enough, we are being asked to vote AGAIN on April 21st. This ridiculous order, jammed down our throat, is by someone we don't even know and don't believe anyone have ever voted for this new DICTATOR. He fired the Board of Election Supervisors we elected--ordered the controller to take money out of the People's treasury without going through the Navajo Nation leaders whom we elected to safeguard our tribal funds.


Now, are we (THE VOTERS) to take this serious violations of our civil rights and rights under the Navajo Bill of Rights and go along and follow whoever scares us and leave nothing for our children and grandchildren.
Let us ask our ELECTED leaders to follow the wishes of the people and remain strong in their position to have a referendum on qualification first. Once the people (in majority) discussed and voted on the matter then set a new general election for the new President. This action will bring the majority of the people back to working TOGETHER for the betterment of our Nation and quit fussing over an edict by someone who we don't even know and never voted for him.


Leaders (Navajo Nation Council) of the Navajo Nation I urge you to get back in your seats and postpone the election NOW and bring harmony back among our people. Going forth with April 21st election will NOT bring us back together; in fact, it will worsen the situation. Please, let's restore harmony first before we decide who is going to lead us through the next four years.

Restoring Tranquility to Navajo Nation
The Navajo Nation Supreme court headed by Herb Yazzie has taken over the Navajo Nation government and ditched the Navajo People, with its April 13, 2015 ruling.  It appears Mr. Yazzie has more over the Navajo Nation council and the Executive Branch.
The two branches are helpless to defend themselves and the rights of the Navajo people. It is only right to cancel April 21, 2015 election. This hijacked election by Herb Yazzie and Percy Deal is illegal. Herb Yazzie is not elected, the Council appointed him and now, they are helpless to defend the freedom of the Navajo people. Our 1st Amendment has been trashed and stomped on like we don’t have a government.
Secondly, it is not wise to continue with the election when all the grievances are not settled, if the election is done, there will be recall efforts, lawsuits, protest, and people not voting in the future due to loss of confidence in Navajo Leaders and government.
Tranquility can be restore to the Navajo Nation by the Navajo Nation President, as the executor of the laws, to stand up for our freedom and restore tranquility, cancel the April 21 election and enforce the referendum vote on fluency and then Presidential election.
April 14, 2015

Can someone explain to me how voting is sacred? Perhaps I have another understanding of Diné traditional and political relations, but a colonially imposed authoritarian system based on majority rules seems to fly in the face of sacredness.