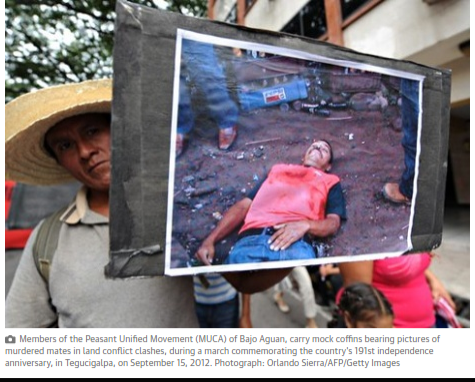 Each week at least two people are being killed for taking a stand against environmental destruction. Some are shot by police during protests, others gunned down by hired assassins. As companies go in search of new land to exploit, increasingly people are paying the ultimate price for standing in their way.


We found that at least 116 environmental activists were murdered in 2014 - that's almost double the number of journalists killed in the same period. A shocking 40 % of victims were indigenous, with most people dying amid disputes over hydropower, mining and agri-business. Nearly three-quarters of the deaths we found information on were in Central and South America.


Globally, it’s likely that the true death toll is higher. Many of the murders we know about occurred in remote villages or deep within the jungle, where communities lack access to communications and the media. It’s likely many more killings are escaping public records.


As well as documenting fatalities, How Many More? analyses global trends in violence and intimidation, with testimony from activists who have suffered threats, attacks, and criminalisation for standing in the way of so-called ‘development’. In a disturbing trend some are even being tried as terrorists, portrayed as enemies of the state.
We also shone a spotlight on Honduras, the most dangerous country per capita to be an environmental activist for the last five years, with 101 deaths between 2010 and 2014.
They follow me. They threaten to kill me, to kidnap me, they threaten my family. That is what we face.- Berta Cáceres, a Honduran activist and winner of the 2015 Goldman Environmental Prize.
The case of Berta Cáceres is emblematic of the systematic targeting of environmental defenders in Honduras. Since 2013, three of her colleagues have been killed for resisting the Agua Zarca hydro-dam on the Gualcarque River, which threatens to cut off a vital water source for hundreds of indigenous Lenca people. Fabricated criminal charges have been filed against her, and two of her children have left Honduras out of concerns for their safety.
The true authors of these crimes – a powerful nexus of corporate and state interests – are escaping unpunished.

These three indigenous Tolupán leaders were killed by gunmen attacking an anti-mining protest in northern Honduras. They had received death threats warning them to desist from their efforts to protect the environment.
We aren’t going to give up the struggle to keep our natural resources clean and in the hands of the community. There are those who want easy money by tearing up the land, contaminating the water. We have been here respecting the earth that gives us our food and we intend to stay here fighting for our right to feed ourselves.- Member of indigenous Tolupán group from Locomapa.
Global Witness is calling on governments and the international community to monitor, investigate and punish these crimes, and for Honduras to address abuses in the upcoming review of its human rights record at the UN Human Rights Council.
Berta Cáceres was awarded the 2015 Goldman Environmental Prize for defending the environment at great personal cost. Hear about her work in the video below. .
..
at April 21, 2015