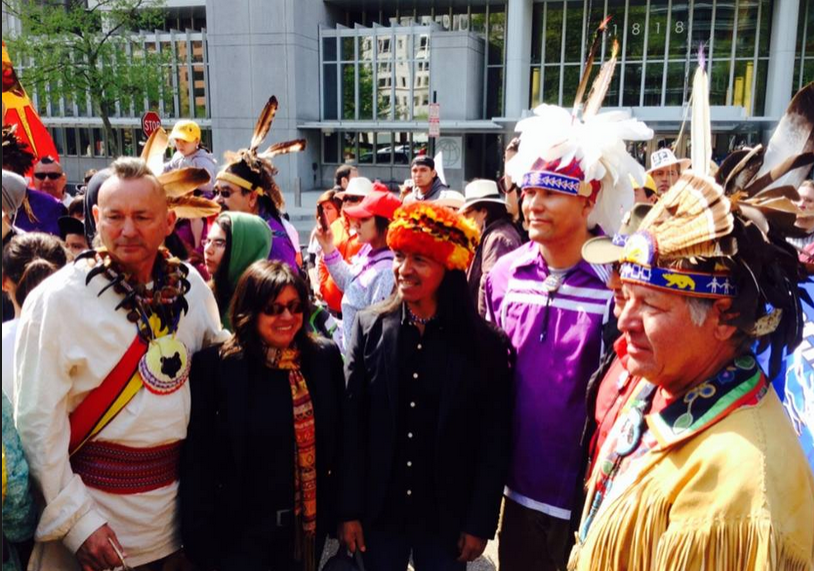 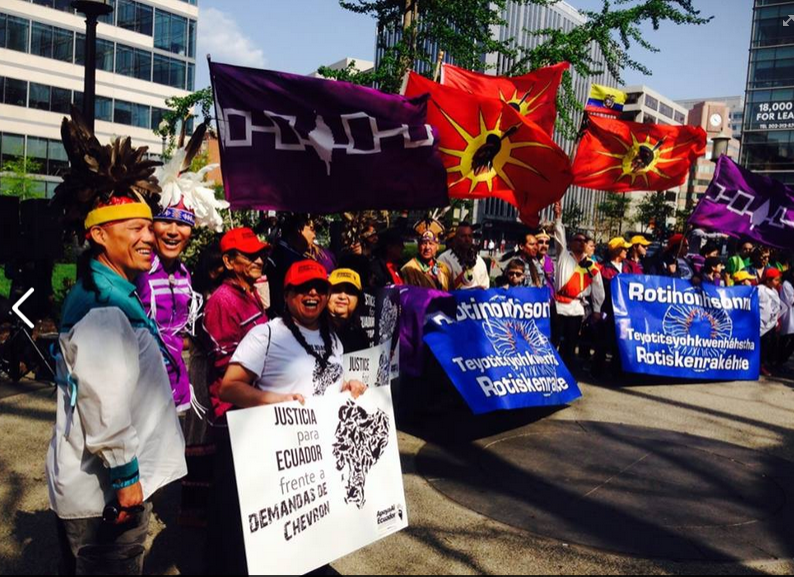 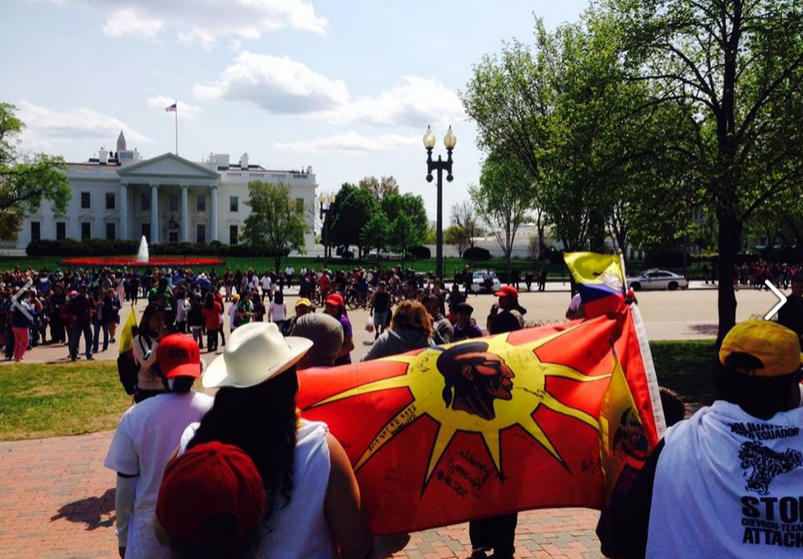 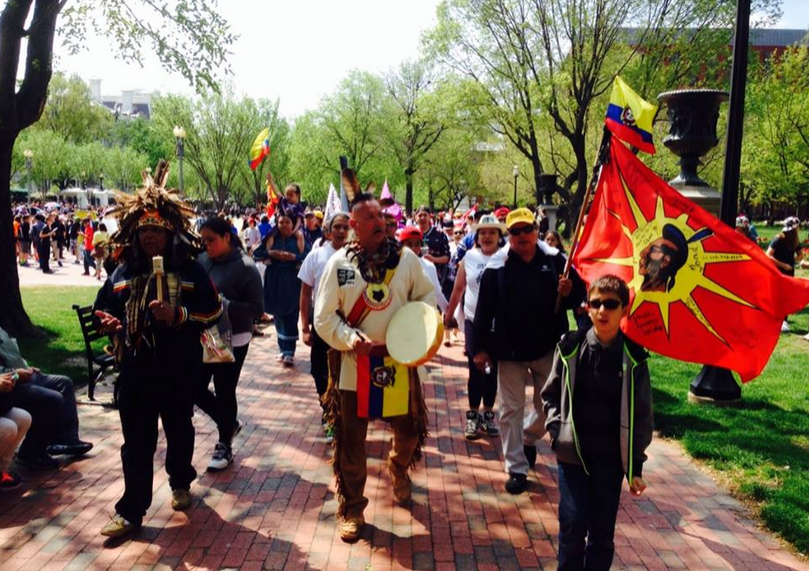 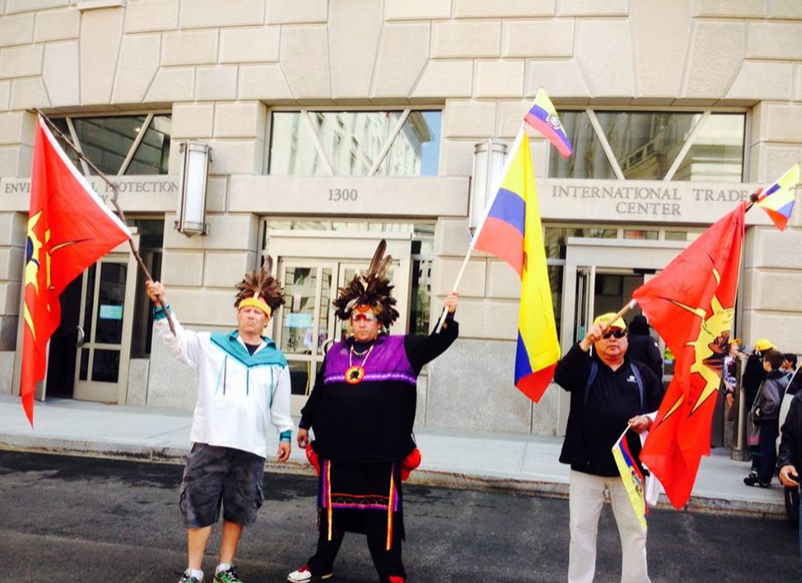 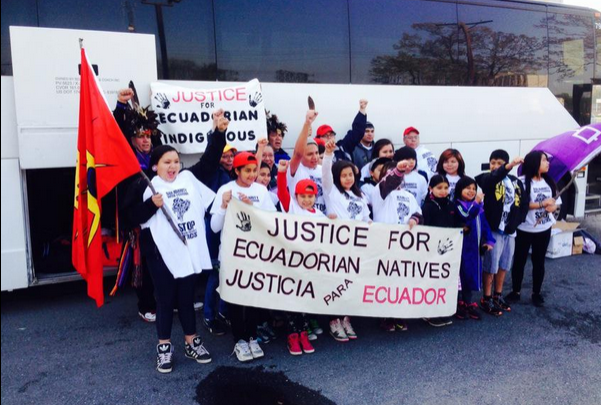 Photos by Tom Keefer. Thank you for sharing with Censored News.
NOW in Washington
Tues., April 21, 2015
Tom Keefer: "I am in Washington DC where I will be live tweeting the historic encounter of the eagle and the condor as over 100 Haudenosaunnee people stand with their indigenous brothers and sisters from Ecuador in their struggle against Chevron. Follow me at @tomkeefer to keep up to date."
News coverage by TeleSur
North, South American Indigenous Peoples Unite in Chevron Fight Indigenous people from Haudenosaunee territories in North America met with indigenous people from Ecuador to unite in their struggle against Chevron, April 21, 2015. | Photo: Tom Keefer Previous Next Published 23 April 2015 0+ We Recommend Demonstrators recalled the Eagle and the Condor Prophecy that foretells the coming together of indigenous peoples from the North and South America.
In what organizers called a “historic” gathering, activists from the United States, Canada, and Indigenous territories from throughout North America met with indigenous peoples from Ecuador to participate in a protest against the Chevron oil company in Washington D.C. Tuesday. Over 100 indigenous peoples from Haudenosaunee communities made the 12-hour journey from their territories in North America to show their support for victims of Chevron's contamination in the Ecuadorean Amazon, who gathered in the U.S. capital in front of the International Center for Settlement of Investment Disputes (ICSID). Chevron has requested that the ICSID hold a hearing in order to compel the Ecuadorean state to pay the US$9 billion that Ecuadorean courts established should be paid to the victim's of the oil company's contamination.
“History was made. The Inca prophecies say that when the Eagle of the North and the Condor of the South fly together, the earth will awaken. The Eagles of the North cannot be free without the Condors of the South,” said Santiago Escobar, an organizer with the Committee in Solidarity with the Affected Communities by Chevron in Canada.
The prophecy of the Eagle and the Condor is a shared prophecy that foretells the coming together of indigenous peoples from the North and South of the American continent, ushering in a new era of peace and justice. See related: 10 Key Points on Ecuador’s Battle with Chevron ​Chevron has worked to evade justice and avoid paying the compensation ordered by the Ecuadorean courts, a ruling that was also confirmed by the South American country’s Supreme Court. Nobel Peace Prize winner Rigoberta Menchu spoke to the assembled crowd, as did Ecuadorean National Assembly Representative Ximena Peña.
The Unity flag, which is used by indigenous peoples from North America, the Hiawatha flag, commonly known as the flag of the Haudenosaunee, flew alongside the flag of Ecuador as the crowd later marched toward the White House. A member of the Haudenosaunee delegation also held up a Two Row Wampum, a beaded belt representing peace, respect, and friendship between indigenous peoples and settlers, at a protest in front of the headquarters of the U.S. Environmental Protection Agency.
A group of Haudenosaunee Rotinonhsonni, often referred to as the Warrior's Society in English, also accompanied the delegation. Oil Giant Texaco — which merged with Chevron in 2001 — is said to have caused what has been called one of the world’s greatest environmental disasters as a result of its oil exploration in the Ecuadorean Amazon between the years 1964 and 1990.This content was originally published by teleSUR at the following address: http://www.telesurtv.net/english/news/North-South-American-Indigenous-Peoples-Unite-in-Chevron-Fight-20150423-0003.html. If you intend to use it, please cite the source and provide a link to the original article. www.teleSURtv.net/english
Posted by Censored News, publisher Brenda Norrell at April 21, 2015

G'chi-Miigwech Censored News. It was pretty powerful to see this coverage while we were still rallying together in DC.