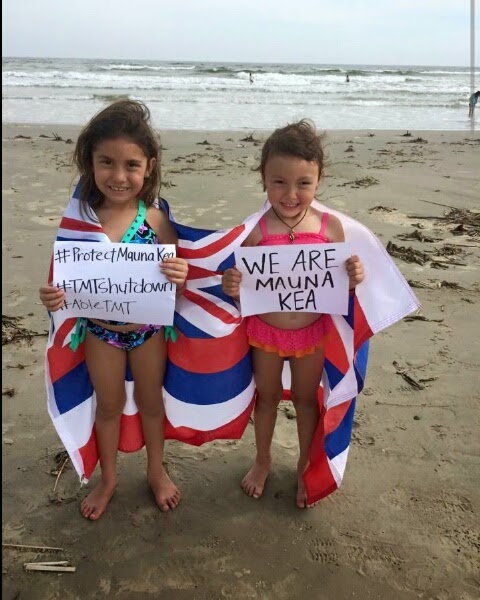 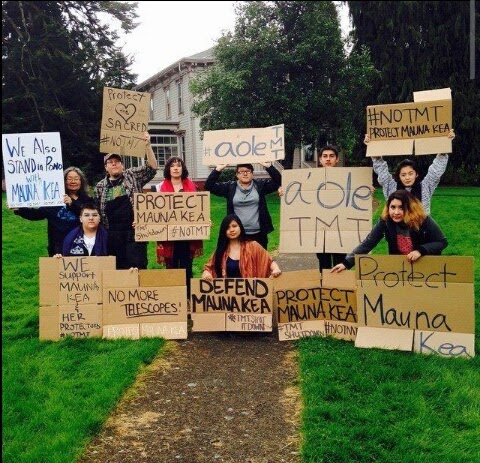 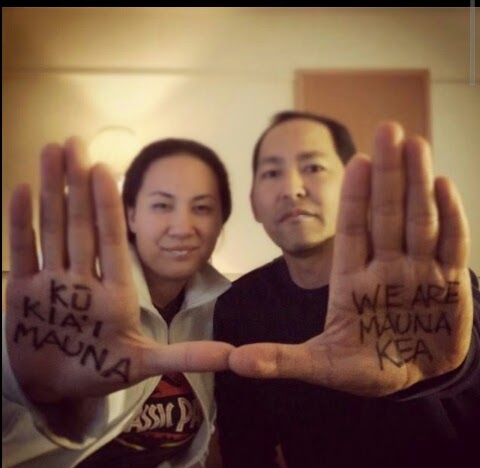 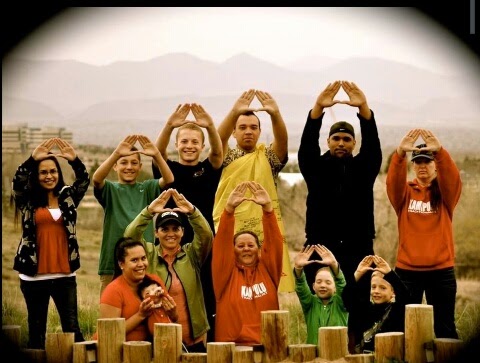 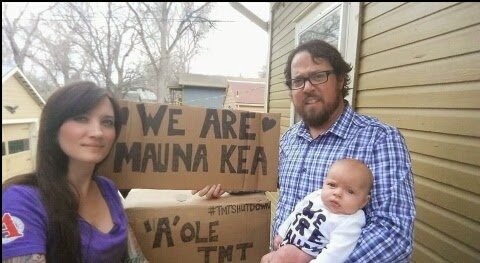 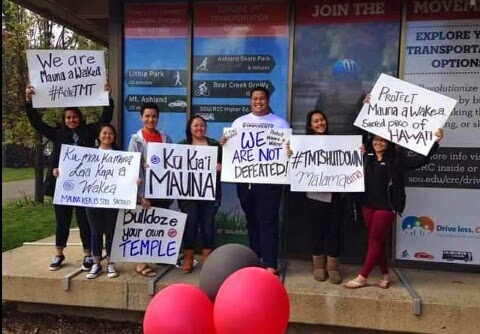 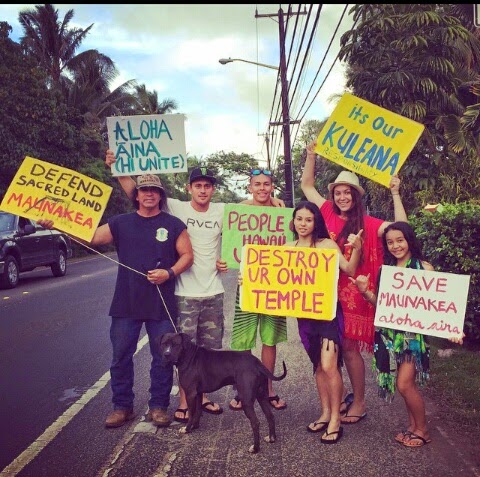 KANAKA WARRIORS CONTINUE TO MONITOR THE SUMMIT OF MAUNA KEA, THEIR MOVEMENT IS GALVANIZED DURING A 'TIMEOUT' AND TEMPORARY HALTING OF CONSTRUCTION

MAUNA KEA, Hawai'i Island, April 8, 2015 — Kanaka protectors representing several islands in the Hawaiian Islands, and a multi-ethnic group of international supporters continue to maintain their vigil at 9,000 feet above sea level to protect Mauna Kea, also known as Mauna a Wakea, on Hawaii Island. The protectors insist on monitoring the summit of Mauna Kea despite Hawaii Governor Ige's declaration that construction will be halted until the end of the week. The protectors continue to vigilantly brave the dangerous, frigid weather on the summit of Mauna Kea, awakening this morning to frozen dew covering their tents.

The warriors (or "protectors") are protecting the mountain from the construction of the Thirty Meter Telescope (TMT), a desecration of one of the most sacred places in the Hawaiian Islands. The peaceful protest has been ongoing for several years, but in the past several months has gathered more momentum and support from Hawaiians and others around the world. The 24 hour blockade began 9 days and nights ago on April 1st, 2015.

Yesterday, despite Governor Ige's command to temporarily halt construction of the TMT project--termed a "timeout" by Ige--Mauna Kea's protectors magnified their numbers exponentially with a global sign-waving and media blitz that  trended on different social platforms internationally.

It is estimated that tens of thousands of supporters took part in hundreds of local and international demonstrations here in Hawaii and around the globe. Many of these world-wide protesters displayed the distinct hand signal that has become synonymous with the Hawaiian worldview of the mountain. The diamond shape hand-signal represents the idea of "piko," a term used to refer to the umbilical cord or center of one's being. For generations, native speakers used the Hawaiian language phrase "ka piko kaulana o ka aina" (literally "the famous summit of all the land") [phonetic pronunciation: Kah pee-koh cow-lahna oh kah eye-nah] to describe the sacredness and wonders of the summit.

In addition to demonstrations from the west to the east coasts of the United States, protectors emerged from many other nations including Canada, Australia, South Korea, Japan, Okinawa, the Philippines, Kanaky New Caledonia, the Marshall Islands, Chuuk (Federated States of Micronesia), Tahiti, Tonga, New Zealand, Norway, England, Hungary, Bulgaria, Germany and Italy, demonstrating how highly regarded Hawaii is in the eyes of the world. Hawaii is marketed as an idyllic tropic paradise and premier international tourist destination to the world, in part for its breathtaking natural beauty of its lands, seas, culture, and people. The world is responding to the protectors call to support the sacred mountain and halt further desecration. The protectors continue to remind all that the 24 hour stand will continue as long as the summit is threatened by the TMT project and any desecration. Visit this link to access pictures of this international support at: https://www.dropbox.com/sh/v4cno7fo24ewa2f/AAArgTh0k2_iye7wNjj9YqFPa?dl=0

Simultaneously today, groups around the world were able to engage in learning and teaching of native Hawaiian oli, or chanting, using social media to disseminate a particular mele, or song, being used to strengthen the momentum of the protestors. A particular composition by kumu (or learned traditional teacher and cultural practitioner) Hinaleimoana Wong-Kalu, facilitated protestors to continue engaging in the Hawaiian cultural practice of "he alo a he alo," or face to face intergenerational teaching. The song entitled "Mele Ku Haaheo E Kuu Hawaii" (literally "a song to encourage Hawaii to stand proud") was taught and filmed on the summit of Mauna Kea recently and can be seen at this link: http://kamakakoi.com/mele-ku-haaheo-e-kuu-hawaii/. This link has been used to teach this song around the world to unify protectors across oceans. In addition, spontaneous creation of poetry, dance, songs, and visual art are being shared on the sacred mauna and across social media.

Lastly, in further response to Governor Ige's statement regarding the TMT project, that prior decisions have been made and should be honored, Kamahana Kealoha an advocate for the Sacred Mauna Kea Hui respectfully releases the following response:

"Although State entities have made decisions in the past to allow the TMT to pass through the Department of Land and Natural Resources' Conservation District Use Application process, the flagrant industrialization of an endangered species district reasonably warrants that entities involved seriously consider the legal ramifications of denying kanaka, and all Hawaii citizens, the basic humanity and protections securing the absolute safety of Hawaii Island's main freshwater aquifer, a resource essential to all life.

The Sacred Mauna Kea Hui also asserts that respect, as consistent with the Hawaiian customs associated with any remains interred, be afforded to iwi, or Hawaiian burials, and that these sacred remains absolutely, for no reason, be desecrated by disturbing them in any way.

Humbly, the Sacred Mauna Kea Hui maintains that an endangered species, protected environment, should never be industrialized so blatantly a stone's throw away from Hawaii island's main water aquifer which is also home to countless sacred, unidentified, traditionally interred graves."

Supporters bailed out all of the detainees within hours of their arrests. Funds such as Sacred Mauna Kea continue to welcome donations to assist with any future bail. The group also is continuing to request donations for flights to and from Hawaii between the other Hawaiian islands as well as much-needed accommodations, including food, ground transportation and other essentials. Visit www.gofundme.com/sacredmaunakea.

For more information and updates, visit http://sacredmaunakea.wordpress.com/. On Twitter #AOLETMT.

Thanks for covering this issue. The local media has been lopsided with poor reporting on the issue while the state of Hawai'i and the University of Hawai'i have pushed their agenda at the expense of Hawaiian culture and the health of the land. International pressure is needed to ensure the sacred status of Mauna Kea is respected from this day forward.

Yes, thanks for covering the issue. It seems as if the pro TMT folks are just waiting for interest in protecting the mountain to die away. They don't realize that they have struck a nerve that has regenerated all of the old memories of injustice against Hawaiians.