The delegation was received by an assembly of collectives from all over the continent in a festive atmosphere
By Brenda Norrell
Censored News
The Zapatistas delegation disembarked from their ship on Tuesday to the sound of bagpipes and a festival, El Pais reports.
Manuel Raxo, the representative of Payasos Rebeldes, one of the collectives of the Galician assembly, said the defense of land and life is what unites them with the Zapatista army. "It is an opportunity to unite and wake up, as they claim, for the territory and all the struggles that unite us."
Read more »
at June 23, 2021 No comments:

Prime Minister, Justin Trudeau, on June 21, National Indigenous Peoples Day, issued the following statement where he plead guilty as leader of the Corporation of Canada to 13 counts of millions of murders, genocide, terrorism and lies.

Read article and listen to audio at Mohawk Nation News 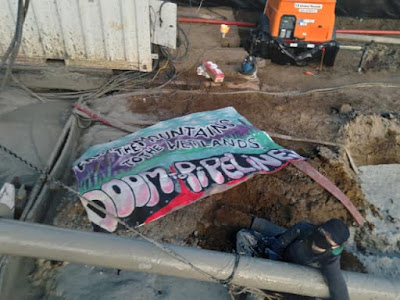 STRAIGHT RIVER, Minnesota -- Several Water Protectors locked to a Horizontal Directional Drill (HDD) being used by Enbridge to bore its Line 3 tar sands pipeline under the Straight River in Hubbard County, Minnesota. One Water Protector has barricaded itself inside the drill operating vehicle.