WALKERS END JOURNEY IN WASHINGTON, DC,
FOR THE PRESERVATION OF SACRED PLACES 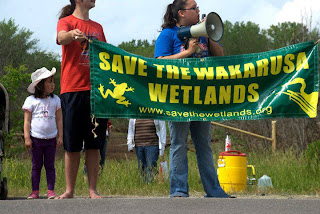 LAWRENCE, Kansas -- On May 13, students from several universities left Kansas on a two-month journey to Washington, DC, to save the Wakarusa Wetlands, Lawrence's only remaining indigenous wetland prairie, from becoming the South Lawrence Trafficway (SLT). They call the journey the Trail of Broken Promises.

Tomorrow, Thursday, June 28, they will walk from Arlington Cemetery at 9 am, to the White House, ending at the steps of Congress where they will endorse the Protection of Native American Sacred Places Act, a draft piece of legislation which will protect sacred places.

The primarily on-foot trek attempts to address the difficulty of preserving sacred places within Indian Country by raising awareness of the WakarusaWetlands. Prompted by the proposed highway construction through the wetland behind Haskell Indian Nations University campus, the students traveled 21 days on the 1838 Potawatomi Trail of Death route to show appreciation to communities maintaining markers of remembrance.

The Trail of Broken Promises led them through 9 states ending in Washington D.C.

The draft piece of legislation the students carry would amend the American Indian Religious Freedom Act of 1978, "to provide a right of action for protection of Native American Sacred Places," such as the WakarusaWetlands. It has been approved by the National Congress of American Indians.
The wetlands adjoin Haskell Indian Nations University, and have been used for ceremony, prayer, and education since Haskell's founding as a boarding schoolin 1884.

"Fighting to save the Wakarusa Wetlands extends beyond our campus," Mike Ofor, a student on the walk said. "Our journey recognizes all Native Americans and all sacred places left vulnerable to developers' agendas."

From Shirley Willard, Rochester IN:
Brenda – please add to your list of news about the Trail of Broken Promises:
www.potawatomi-tda.org –which is Potawatomi Trail of Death Assn.,  see Trail of Broken Promises Walk and click.
www.americanindiancenter.org – which is American Indian Center of Indiana.
I have written several stories for the Rochester Sentinel but you have to be a subscriber to see the eEdition. However I put all my articles in www.potawatomi-tda.org.
Thanks.
at June 27, 2012 No comments: 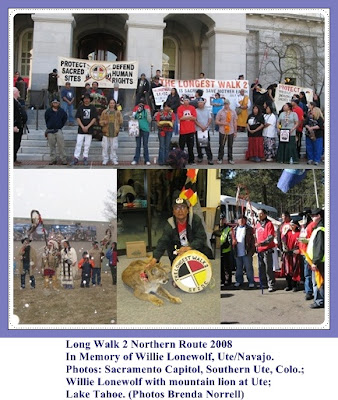 "The purpose of this Walk will be to reaffirm the heart of Traditional Tribal Sovereignty rooted in Cemony and land based spiritual relationships. We call on all Indigenous Peoples to come and support this Walk," Long Walk 4 said. http://returntoalcatraz.com/press-release

UDATE
WHAT:  Traffic blockade of White Clay, Nebraska in order to stop the illegal transport of alcohol onto Pine Ridge Reservation. Friday will be one of the busiest days of the summer as monthly checks come out prior to the July 4th holiday.

On Thursday night, Chief Robert Greenwald of the Oglala Sioux Tribe (OST) Department of Public Safety agreed to cooperate with the blockade and enforcement of OSTCode 88.01.  Strong Heart welcomes this participation and noted Greenwald’s past statement in a May public meeting, that he wished to work more closely with traditional warrior societies like StrongHeart. 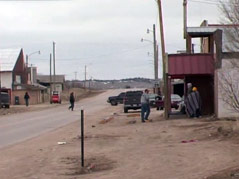 “We are asking these stores to leave the Lakota people alone so we can have a future and implement rehabilitation of our people,” Martinsaid.

WHERE:  Borderbetween Pine Ridge Indian Reservation in South Dakota and the town of WhiteClay, Nebraska.

WHO:  Cante TenzaOkolakiciye, known as the traditional Strong Heart Warrior Society of theLakota Nation will be leading the blockade with support from OST Public SafetyHighway Division officers. Members of the Oglala Lakota Nation will be there insupport. Cheyenne River Sioux Tribe activist Laci Hale will be coordinating theparticipation of the women.  Deep Green Resistance will be present in solidarity.

OST lay advocates Susan Schrader and Carmen Yellow Bull arecalled upon to monitor the behavior of public safety officers in the enforcement of OST and sovereign customary law. Local, state, national and international media have also been notified of the blockade.

WHY: The small border town of White Clay sells over 13,000 cans of beer a day, or FIVE MILLION cans of beer a year to mostly Oglala Lakota people in an ongoing act of physical and spiritual genocide of the Lakota people. With direction from traditional Grandmother societies in Pine Ridge Reservation, Strong Heart has been at the forefront of trying tostop the illegal flow of alcohol into the Pine Ridge Indian Reservation forover 12 years. This zero tolerance ban is defined in Oglala Sioux Tribal Ordinance 88.01 as well as traditional Lakota customary law. 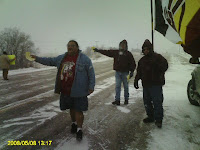 Cante Tenza Okolakiciye also known as the Strong Heart WarriorSociety of the Lakota Nation is an ancient Lakota warrior society as well as abroad-based civil rights movement that works to protect, enforce and restoretreaty rights, civil rights, and sovereignty of Native people and theircommunities across Turtle Island.

Media aids scheme to steal Hopi and Navajo water rights by not checking the facts, or reporting the news

June 27, 2012
The media has published false reports that the Hopi Tribe passed the Little Colorado River settlement, which is aimed at giving Hopi and Navajo water to non-Indians in Arizona, along with the coal fired power plant, Navajo Generating Station, one of the dirtiest in the US, and Peabody Coal.
The bill, devised by Arizona Senators Jon Kyl and John McCain and non-Indian attorneys, would require Hopi and Navajo to give up their aboriginal water rights. The water rights theft scheme is aided by paid armchair journalists and online aggregators who do not check the facts of what they are posting.
Kris Barney, Dine', arriving in Window Rock today, after walking and running from western Navajoland to defend sacred water, said, "We must remain strong and in unity, with our sacred thoughts, prayers and the gift of water through rain from above. They do not own life, they should not have the power to sell, trade or barter our lives, futures. The people have spoken. And Lightning flashes in the dark all across this Window Rock ..."
Three former Hopi Tribal Chairmen responded to false reports in the media and to false reporting by Hopi Chairman Shingoitewa concerning Senate Bill 2109, Navajo-Hopi Little Colorado River Water Rights Settlement Act of 2012.
Meanwhile, at the last minute, the Navajo Council announced that a Navajo Nation Council session today, Wednesday, June 27, to vote on the water settlement, is cancelled.
In a statement, the three former Hopi chairmen said that Hopi Tribal Chairman LeRoy Shingoitewa and Council Representative George Mase gave out false information that the Hopi Tribe approved the water settlement, when in fact, the Hopi Tribal Council, by a vote of 11 for, 4 against, and 0 abstentions, rejected the Kyl bill on June 15, 2012. Over 100 tribal members witnessed the event.
“Representatives from the Hopi villages, traditional leaders, allottees, and tribal members provided overwhelming objection to, and rejecting Senate Bill 2109 through written and oral testimony in a packed Hotevilla Elderly Center. Senate Bill 2109 favors non-Indian parties including owners of the Navajo Generating Station and the Peabody Coal Company; requires waiver of Hopi aboriginal and federal reserved water rights to the Little Colorado River; and waives any future claims for damages done to the Navajo Aquifer and sacred springs by Peabody Coal Company and owners of the Navajo Generating Station.”
“After hearing the people’s testimony, the Hopi Tribal Council passed Resolution No. H-072-2012 rejecting Arizona Senator Jon Kyl’s Senate Bill 2109. But, Shingoitewa has refused to sign this resolution forcing the former elected tribal leaders to file a formal complaint to the Hopi Tribal Council and demanding Shingoitewa’s immediate removal.
“Hopi Council Resolution H-072-2012 not only rejects Senate Bill 2109, it also prohibits Shingoitewa, the Water and Energy Team and the Hopi Tribal Council from further negotiations on Senate Bill 2109, including the Settlement Agreement. It also requires Hopi Chairman Shingoitewa to report the official position of the Hopi Tribe to Senator Kyl and the Department of Interior on the formal rejection of Senate Bill 2109.”
The official position of the Hopi Tribe is embodied in Resolution H-072-2012 which rejects Senate Bill 2109 and the proposed Settlement Agreement.
Read complete statement: http://www.bsnorrell.blogspot.com/2012/06/medias-false-report-on-hopi-council.html
at June 27, 2012 No comments:

KYKOTSMOVI, Ariz. -- Hopi Tribal Chairman LeRoy Shingoitewa and Council Representative George Mase have been giving out false information that the Hopi Tribe approved Senate Bill 2109, the Navajo-Hopi Little Colorado River Water Rights Settlement Act of 2012, when in fact, the Hopi Tribal Council, by a vote of 11 for, 4 against, and 0 abstentions, rejected the Kyl bill on June 15, 2012. Over 100 tribal members witnessed this historic event.
Representatives from the Hopi villages, traditional leaders, allottees, and tribal members provided overwhelming objection to, and rejecting Senate Bill 2109 through written and oral testimony in a packed Hotevilla Elderly Center. Senate Bill 2109 favors non-Indian parties including owners of the Navajo Generating Station and the Peabody Coal Company; requires waiver of Hopi aboriginal and federal reserved water rights to the Little Colorado River; and waives any future claims for damages done to the Navajo Aquifer and sacred springs by Peabody Coal Company and owners of the Navajo Generating Station.

Leroy Shingoitewa and George Mase have been providing false and misleading information that the Hopi Tribe approved and endorsed the Kyl bill. They are doing this so they can continue the Little Colorado River water rights negotiations. Any negotiations by Hopi tribal officials would be in direct violation of Resolution H-072-2012 and would be grounds for Serious Neglect of Duty charges under the Hopi Tribe’s constitution.

Shingoitewa convened an illegal tribal council meeting on June 21, 2012, to force passage of a council resolution to “endorse” Senate Bill 2109. This he did out of total disrespect for the Hopi and Tewa people’s rejection of the Senate bill. Upon hearing of this action, many tribal members are angered and are demanding immediate removal of Hopi Chairman Shingoitewa and George Mase.