Photos 'Walk for Life' on Dineh and Hopi lands 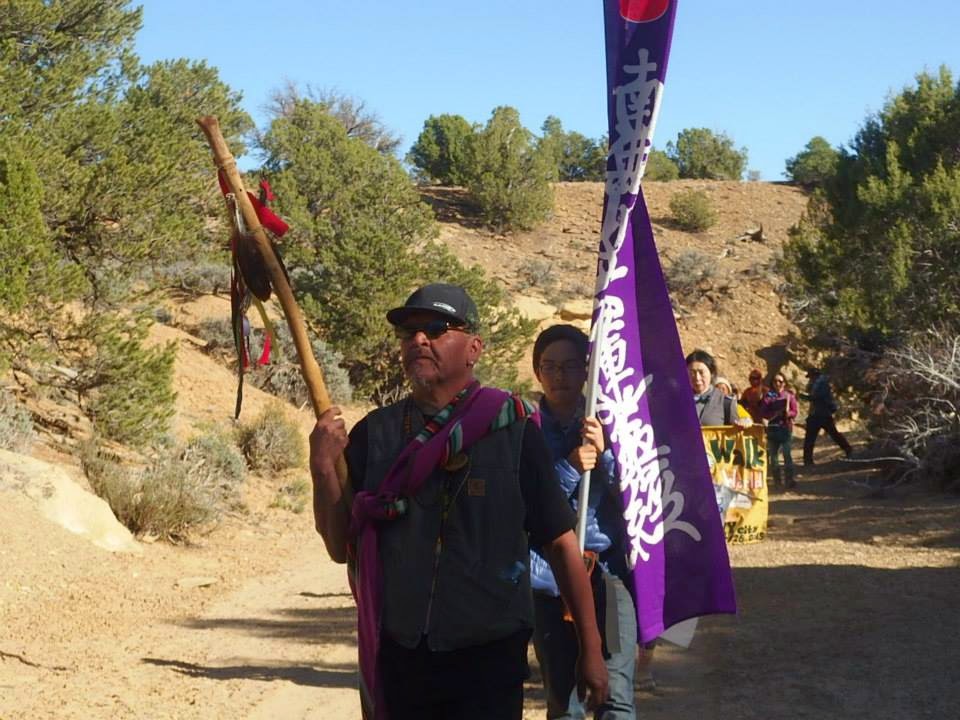 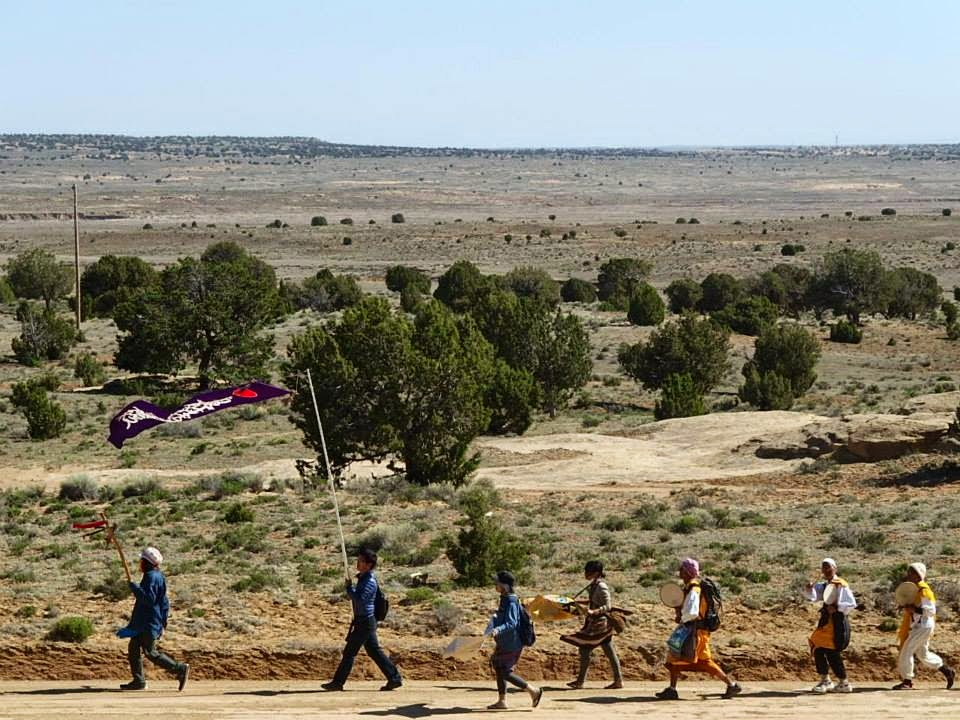 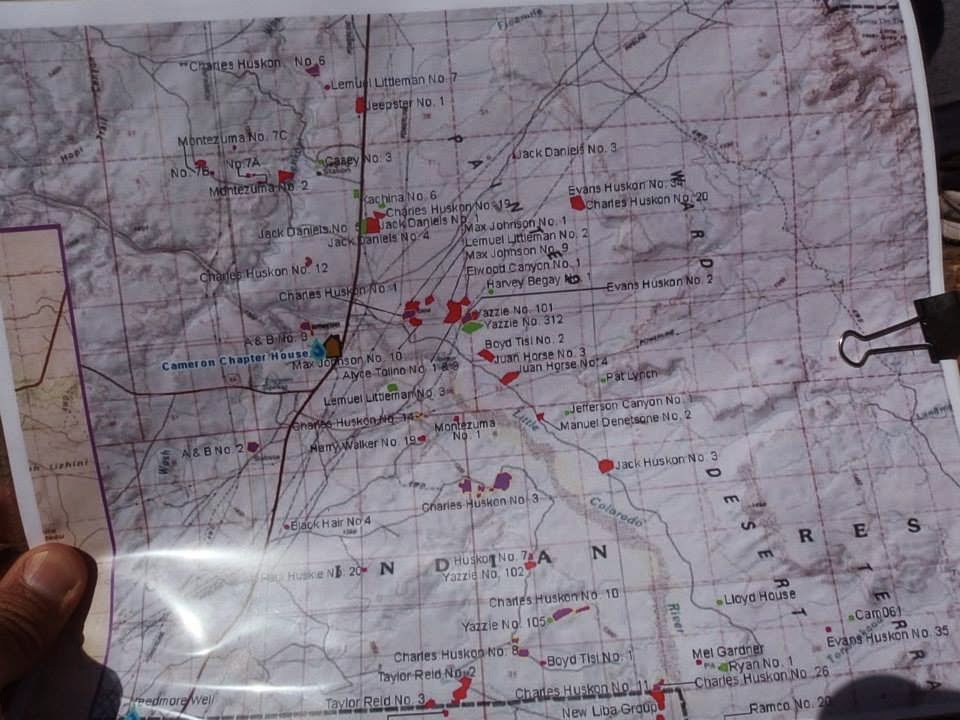 Thanks to Bahe Katenay of Big Mountain for sharing news
of this Walk for Life on Dineh and Hopi lands.
They are walking on the scars of uranium and coal mining.
Photos by Inochino Koshin of Japan.
Thank you from Censored News
at April 13, 2015 1 comment:

Journey for Existence 'Tl'izi brings us together' 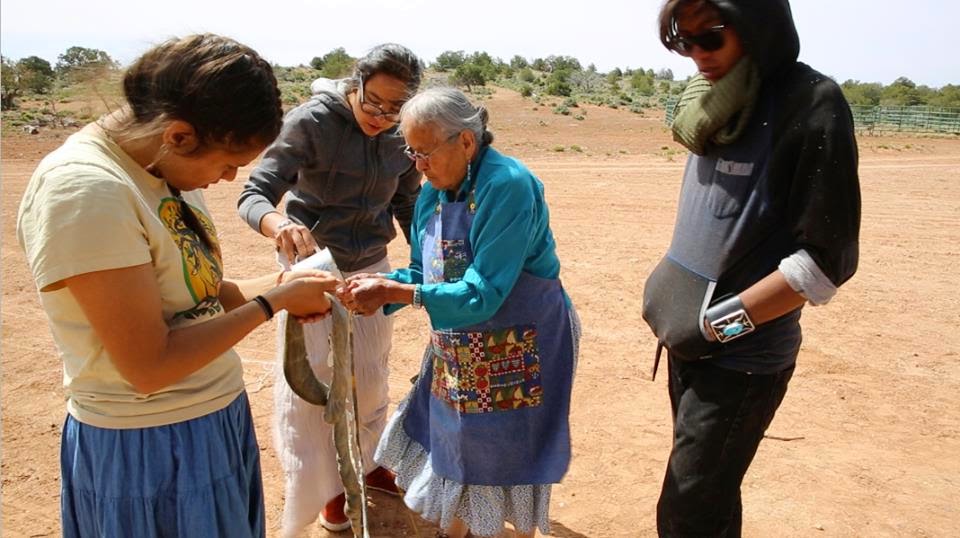 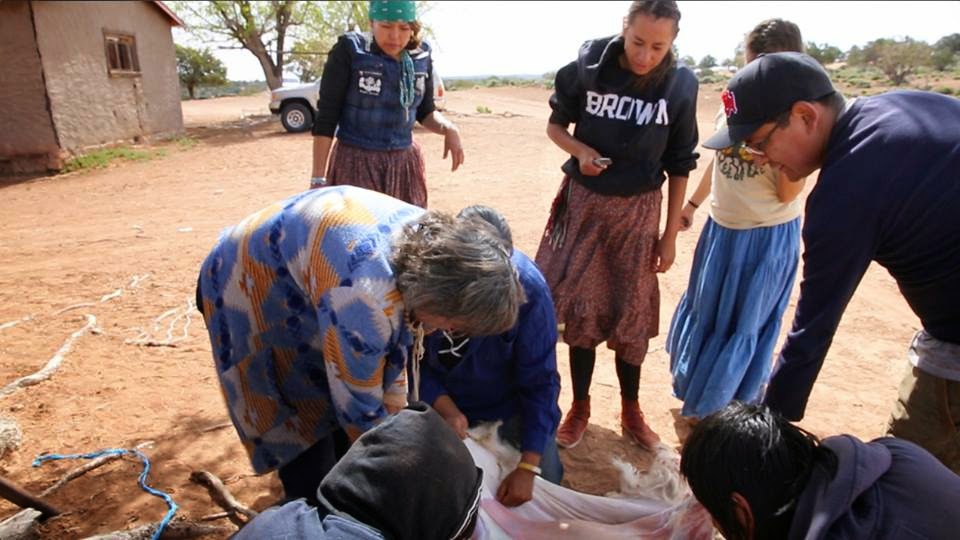 Navajo Station, Navajo Nation -- Today we were honored to connect with our food directly. Some of us learned the skill of butchering for the first time. It is all a part of coming home to ourselves, knowing where our food comes from, that the animals we eat are treated with respect and care. The process of preparing and eating this tł'izi brought all the walkers together with a very beautiful family. We learned how to honor the animal by using every last piece of it. Through this skill we are not beholden to any system, we are able to feed ourselves. This is how we become the masters of our own destiny. The sound of the blade on the pelt is the sound of Diné liberation. So thankful to this tł'izi and to our ancestors for passing down the art of self-sufficiency. 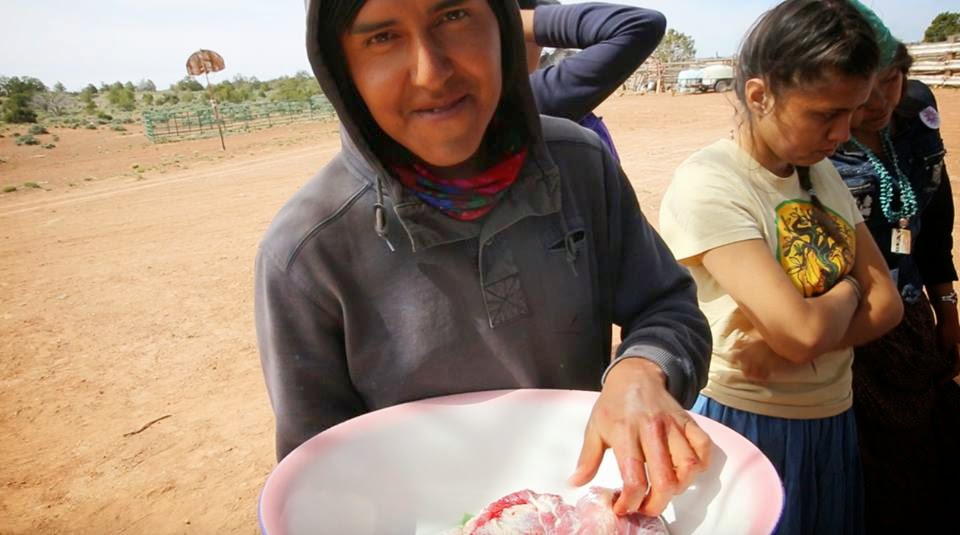 The Navajo Nation sits on one of the richest energy corridors in the United States, and for close to a century, we have been on the frontline on resource colonization to provide cheap energy and water to the cities in the Southwest. Since the 1920's, our land and people have been sacrificed for energy extraction for oil, gas, uranium, and coal, which is poisoning our land, water, air, and people.

Judges Grill Attorneys From Both Sides Over Landmark Case

The article continues, (The project) “previously came under fire for displacing desert tortoises with the solar towers. In 2012, Bloomberg Businessweek reported the tension between the project's green ambitions and not-so-green execution:
Early on, the project gained green cred from the Sierra Club and Natural Resources Defense Council. That was before its 45-story towers began rising from a 3,500-acre dry lake bed in California, uprooting scores of desert tortoises from their burrows, far more than federal wildlife officials had estimated.”
In late October, 2014, GreenTechSolar reported: “The Mojave Desert plant, built with the aid of a $1.6 billion federal loan guarantee, kicked off commercial operation at the tail end of December 2013, and for the eight-month period from January through August, its three units generated 254,263 megawatt-hours of electricity, according to U.S. Energy Information Administration data, that’s roughly one-quarter of the annual 1 million-plus megawatt-hours that had been anticipated.
Output did pick up in the typically sunny months of May, June, July and August, as one might expect, with 189,156 MWh generated in that four-month period. But even that higher production rate would translate to annual electricity output of less than 600,000 MWh, at least 40 percent below target.
Another sign of the plant’s early operating woes: In March, the owners sought permission to use 60 percent more natural gas in auxiliary boilers than was allowed under the plant’s certification, a request that was approved in August.”

Hillary leaves tracks in the oil

As Secretary of State, Hillary Clinton targeted Indigenous Peoples defending their homelands. Millions have flowed into the Clinton Foundation from oil and mining.

While Secretary of the State Department, Hillary Clinton orchestrated a spy network targeting Indigenous activists throughout the Americas who were defending their homelands from drilling, mining and development. Those targeted in the dragnet spanned the Americas, from the Mohawks in Canada to Mapuche in Chile.

Further, while Indigenous Peoples were dying defending their lands from mining in Peru, the US and four other countries met as a pro-mining alliance in Peru and reported in to Hillary Clinton, as exposed in the Wikileaks cables.

Now, a Swiss banking leak reveals that the Clinton Foundation has received millions from Canadian mining magnate Frank Giusta. Further, a top donor to the Clinton Foundation is Saudi Arabia, a country leading in human rights violations which has teamed up with the United States to orchestrate a regime partnership.

The Bill, Hillary and Chelsea Clinton Foundation now has $277 million in assets. The Charity Index says it can not consider it a non-profit.

Bill Clinton and Canadian mining magnate Frank Giustra posed as humanitarians while Giustra bilked Indigenous Peoples globally out of their lands and resources for gold and copper mining. Then, millions flowed into the Clinton Foundation from Giustra.
http://bsnorrell.blogspot.com/2015/02/swiss-leak-mining-magnate-and-clinton.html

Now, the Clinton Foundations' Saudi Arabia financiers have been exposed. Saudi Arabia is the world's number one producer of oil, and has the second  largest oil deposits, with Venezuela having the largest.

Further, the Clinton Foundation received hundreds of thousands of dollars from an agency promoting the Keystone XL tar sands pipeline, according to exposure by the Wall Street Journal.

The Clinton Foundation's number one donor is The Children's Investment Fund Foundation, a hedge fund of steel, coal and energy investors.


The following article describes how the five country pro-mining alliance met in Peru while Indigenous Peoples were dying defending their lands. In the cables, the US Ambasssador reported in to Hillary Clinton, Secretary of State.

Censored News wrote a series of articles about spying on Indigenous Peoples while Hillary Clinton headed the State Department, as exposed by Wikileaks in the cables. Hillary Clinton demanded DNA and iris scans of leaders of state and others targeted, in her cables to Ambassadors.
By Brenda Norrell
Censored News

Wikileaks exposed State Department cables stating that a core group of diplomats formed an alliance with mining companies globally to promote and protect mining interests. The diplomats were from the U.S., Canada, U.K., Australia, Switzerland and South Africa.

SupGaleano reflects on the cyber attack: 'Why so serious?' 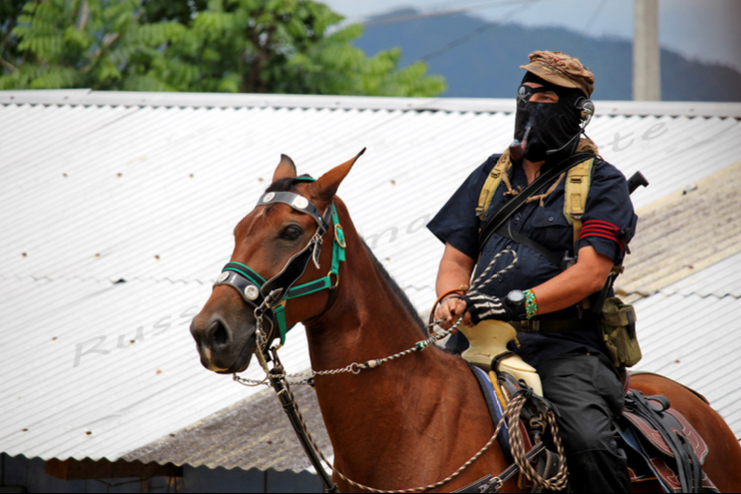 Why so serious? SupGaleano

(01001101 01110101 01100011 01101000 01100001 01110011 00100000 01000111 01110010 01100001 01100011 01101001 01100001 01110011 00100000 01000011 01101111 01101101 01110000 01100001 01110011 (note: translate binary code)
April 2015.
We didn’t know anything about this kind of thing. We learned. They explained it to us. We understood even less. But later on, “we grasped the concept holistically,” as they say. That is, not at all. But they were saying something about how we had been victims of a “high level” cyber attack. We of course put on our “no problem” face, the one that says “the proper measures will be taken” and “we will pursue this case to its logical conclusion.” But really, we were asking ourselves if it happened because of all the times we ourselves go to the page in order to increase the number of visitors. “Some over-enthusiastic clicker” we thought. But that part is confidential, so we’d appreciate it if you didn’t make it public.
Later on they told us that calculations show that in the United States alone, the average annual cost of cyberattacks was 12.7 million dollars in 2014. We didn’t understand, I mean about the quantity. When they explained it to us, we panicked and ran to see if our pozol reserves had diminished.
Nope. “Stable levels,” the guard said (this means there is enough for the homages and the seminar). At that point, all was still well. The problem was that in order to celebrate the fact that the cyberattack had not penetrated the solid vaults where we store the “gold of the LXIX century,” we had a party and a dance with the community DJs’ electronic music. The result? The strategic reserves were substantially reduced and now we have to replace them.
But, as they say, now it is official: neozapatismo has entered the 21st century. Okay, okay, okay, we’re late, but keep in mind that it’s only 2015.
Did you think the image of modern Mexico lay in Beverly Hills shopping, helicopter travel, or an electoral ad? Wrong! Error 404! ¡Erreur! ¡Fehler! ¡Oшибка!
The webpage of the eezeeelen was cyberattacked!
Okay, okay, okay, we don’t really know what that means (being so premodern, we’re only accustomed to attacks by soldiers, police, paramilitaries, and various ink-shitters), but it sounds so fancy, so classy, so first world.
Oh, I thought this day would never come! Let Sony, Microsoft, and Apple die of jealousy! Let Obama, Putin, and Merkel turn green with envy! Let Walmart, Carrefour, Tesco, and Metro swell with rage! Let Samsung, LG, and Motorola buy their antacids! Prostrate yourselves cola drinks, junk food and fast food! Don’t hide your humiliation International Monetary Fund, World Bank, and World Trade Organization!
We will take it for what it is: a small homage to our humble and quiet work of clicking on the webpage to raise our “web traffic” and soon, we will be collecting payments for advertising self-help courses, language classes in Elf, Dothraki, High Valerian, Klingon, and Na’vi, and of course, online offers from “The Speedy Huarache.”
Well in reality and in La Realidad, all this is nothing but a pretext to send you all an embrace and say:
Thanks to the gang, the plebes, the crew, the barrio, the homies, the brothers, the compas or whatever you call them, who lent a hand, some support,, backup, and, as they say these days, “replicated” the content of the pages, the tweets, the facebook, and the chats closest to their respective hearts. As this is sure to happen again, we want to reiterate once and for all: Thank you (please use the scientific method of “copy and paste” for this note of appreciation because it won’t be the last time you need it).
From the cyber-concierge, protecting itself with the hyper-modern firewall Pozolware 6.9.
SupGaleano, fighting with the cat-dog over the copyleft rights.
(Nah, really we’re fighting over the popcorn…but I got here first!)
Mexico, April 2015.
From the diary of the Cat-Dog:
Looking for who to blame:
-The trendy hypothesis of “Moderate Hysteria“:
It was without doubt the reptile-millenial-illuminati-narcoglobalist-party follower-electoralists.
-The trendy hypothesis of “Misogynist High Politics“: It was Frank Underwood, but with bad advice from Claire… Okay, okay, okay, Petrov then? 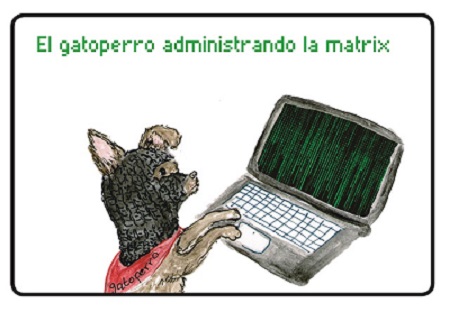 -Report from Big Brother, received by the Pentagon: (Summary of observations from “The Situation Room” of the “East Wing” of the Zapatista Hexagon. Reporting: Echelon System. April 7, 2015. 2330 hours, zulu time): Opinions were split: someone said it was us (the Pentagon), someone else said it was the Kremlin. Somebody else said Buckingham Palace, el Palacio de Hierro,[i] Liverpool, or Sears. Nobody said the Eifel Tower (this calmed them down because they were worried about their buddies from Tameratong)?
Some embittered soul said that they already knew that the new season of Game of Thrones was no good at all. Some indescribable character, something like a dog…or a cat…or viceversa, put up a sign that read: “Spoiler Alert.”
It sounded like they were about to come to agreement on something when the sound of a marimba being tuned was heard. The voices in the audio become chaotic, confused, and the only thing that can be made out is a kind of shout: “Pozol Agrio!” It must be some kind of alarm signal because the “Situation Room” and the whole east wing of the complex was quickly deserted.
(end of the report that demonstrates that the budget dedicated to spying is money thrown into cyberspace garbage).
-Section “There is a Trending Topic in your future.” Suggestions for solidarity hashtags:
#wewanttheezeeelenwebpagebackeventhougwealreadyregistered
#theenlacezapatistawebpageisbackonlineandifitgetstakendownthehomieswillhelpus
#don’tlettheenlacezapatistawebpagethatistheblogoftheezlncommissionsextabecyberattackedbytheconspiracyinfashion.
I testify:
(grunts and snorts). 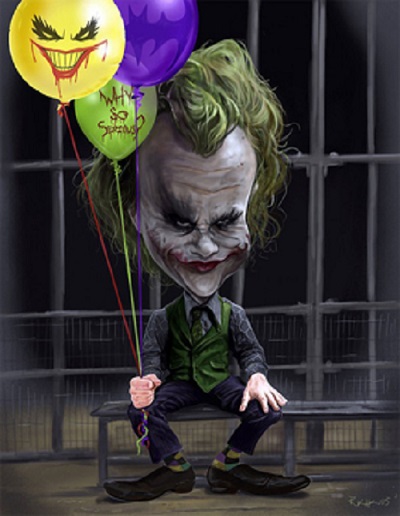 [i] “The Iron Palace,” an upscale chain of department stores in Mexico.