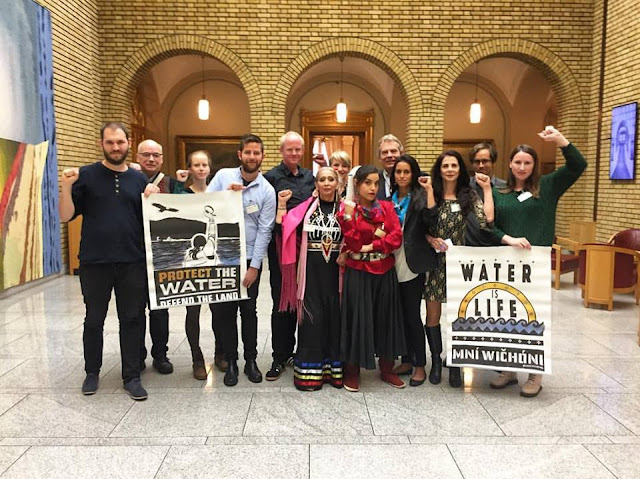 Photo by Charlotte Synnøve Garmann-Johnsen. Charlotte said, "My indigenous friends are back in Norway to tell the Norwegian Oilfund to stop their investments in dirty oil pipes that are polluting their drinking water. We are a lot of people standing with you!"
Below in the news: Mer oljetrobbel for DNB
https://www.nrk.no/sapmi/dakota-kvinnene-vil-ha-norske-penger-ut-av-omstridte-oljeror-1.13714954 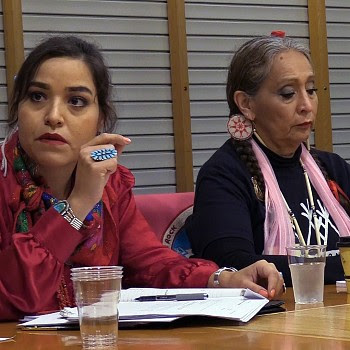 Mohawk Nation News
http://mohawknationnews.com/blog/2017/10/02/peace-righteous-power/Please post & distribute.
MNN. Sept. 27, 2017. sken-nen, kari-wiio, kasa-stsenera and atonwa-kowa are the four principles that bind together the original instructions from creation to all life.
sken-nen is the bond of love of one another, our families, our people and all life. kanoron-watsera keeps us unified with natural reality.
Read more »
at October 02, 2017 No comments: 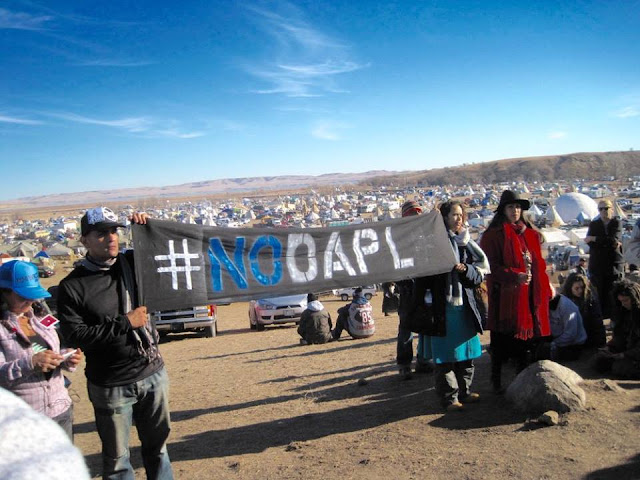 A delegation of Indigenous women from Standing Rock and their allies who observed and/or experienced human rights and Indigenous rights violations in North Dakota, U.S. will hold a public event in Oslo to share on-the-ground experiences from Standing Rock and other traditional territories, as Indigenous women who are living in communities directly impacted by fossil fuel extraction and infrastructure. Indigenous women around the world are impacted first and worst by the effects of environmental destruction and a rapidly changing climate. However despite all odds and against great challenges, it is these very same Indigenous women who are rising up, challenging the status quo, holding a vision, and taking action to build the vital solutions needed for a just and livable future for everyone.The DAPL fight is not over, with ground-breaking discoveries regarding abuses by a private security firm during the construction of DAPL; on-going court determinations regarding DAPL’s impact on Indigenous Treaty rights; and an emergence of pipeline resistance and activism in Indian Country and beyond in the face of new pipelines that threaten Indigenous rights and life-ways as well as the climate and water.WHAT: Indigenous Women’s Divestment Delegation to Europe: Experiences from Standing Rock and Other Impacted Indigenous Territories. WHO: LaDonna BraveBull Allard (Lakota historian, member of the Standing Rock Sioux Tribe and founder/landowner of Sacred Stone Camp); Dr. Sara Jumping Eagle (Oglala Lakota and Mdewakantonwan Dakota pediatrician, living and working on the Standing Rock Reservation, North Dakota); Tara Houska (Anishinaabe, tribal attorney, National Campaigns Director of Honor the Earth, and former advisor on Native American affairs to Bernie Sanders); Michelle Cook (Diné/Navajo, human rights lawyer and a founding member of the of the Water Protector Legal Collective at Standing Rock); and Jackie Fielder (Mnicoujou Lakota and Mandan-Hidatsa, Campaign Coordinator of Lakota People's Law Project and organizer with Mazaska Talks); with Osprey Orielle Lake (Women’s Earth and Climate Action Network (WECAN) Executive Director).Beaska Niillas from Norwegian Sami Association will also be present. The event will be in English, and will take place in Laboratoriet on the 3rd floor.
.
at October 02, 2017 No comments: