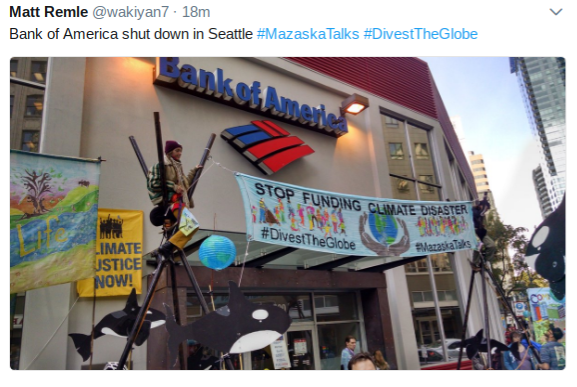 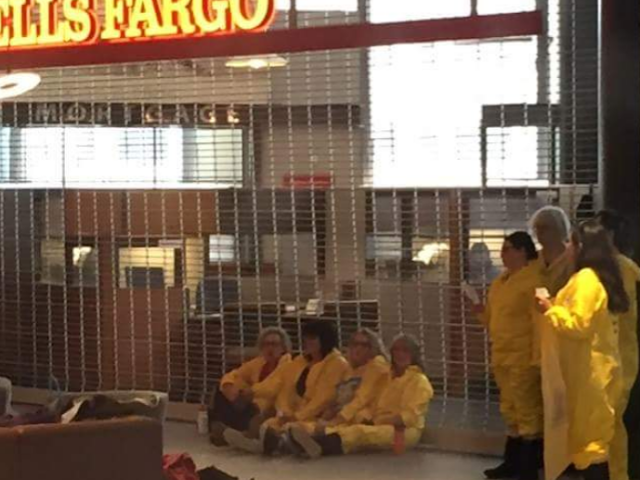 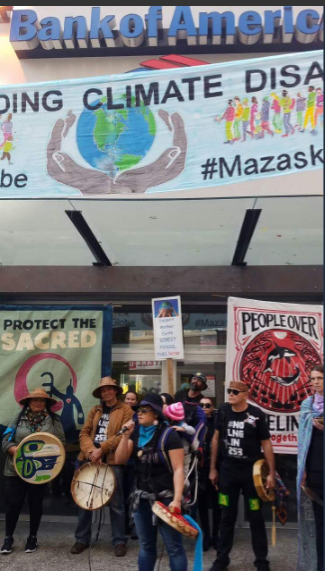 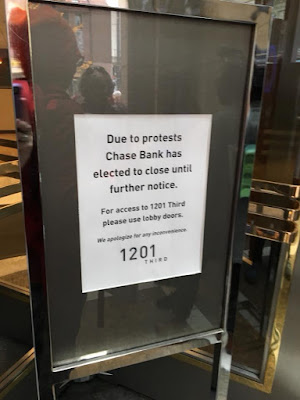 Update: In the news at Seattle Weekly

By Sara Bernard, Seattle Weekly
On Monday, 19 groups of activists fanned across Seattle—along with many other groups across dozens of cities in the U.S. and Canada—to disrupt business and “loudly,” Connon said, deliver a letter to managers of all 103 branches of the five banks operating in Seattle that have contributed money to tar sands projects: Wells Fargo, JP Morgan Chase, Bank of America, US Bank, and TD Bank. The letter, signed by a long list of indigenous and environmental leaders, promises that all of the undersigned will boycott those banks, as well as encourage all of their supporters to boycott those banks, until they withdraw funding from the tar sands.
Read article at http://www.seattleweekly.com/news/activists-disrupt-over-100-bank-branches-across-seattle-for-financing-tar-sands-projects/ 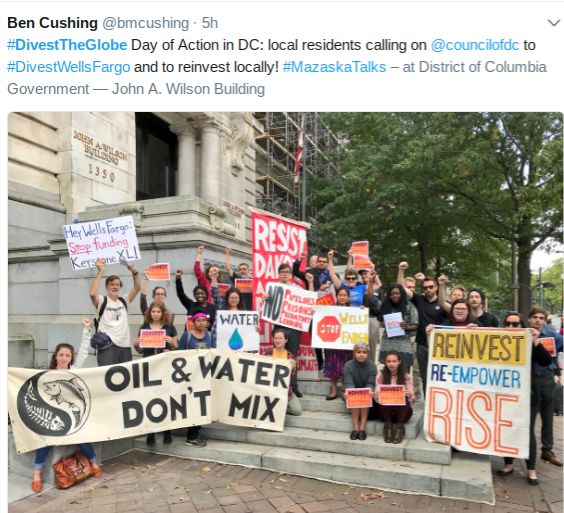 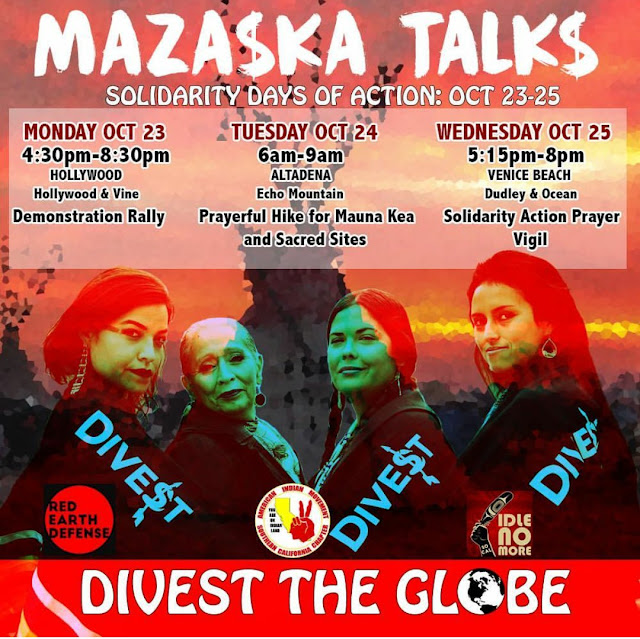 Download: mp3 (Duration: 20:39 — 18.9MB)
http://www.risingupwithsonali.com/indigenous-women-take-pipeline-activism-global/.
FEATURING MICHELLE COOK – The struggle to protect water resources from extractive industries is not over with the approval of the Dakota Access Pipeline in Standing Rock, North Dakota. A delegation of indigenous women leaders is globalizing their activism, traveling to Europe to push for financial divestment from pipeline projects.
The women met with political leaders and representatives in banking and insurance in Norway, Switzerland, and Germany, to demand that nations with high standards for human rights refuse to fund extractive industries in the United States, especially when the impacts of those industries are felt most by indigenous and vulnerable communities.
The Indigenous Women’s Divestment Delegation included LaDonna Brave Bull Allard, founder of the Sacred Stone Camp and a member of the Standing Rock Tribe, Tara Houska, tribal attorney and former advisor on Native American affairs to Bernie Sanders, as well as my guest Michelle Cook.
For more information visit www.mazaskatalks.org and www.wecaninternational.org.
Michelle Cook, indigenous human rights lawyer and a current SJD candidate at the University of Arizona’s Indigenous Peoples Law and Policy Program. She is writing her dissertation on international law, indigenous people’s human rights, gender, sexuality, and indigenous transnationalism. She is a founding member of the Water Protector Legal Collective, the on the ground legal team which provides legal services to those arrested at the Standing Rock encampment.


Rising Up with Sonali is an all-women run Radio and Television show that brings progressive news coverage rooted in gender and racial justice to a wide audience. The radio program airs on Pacifica stations KPFA and KPFK, and several affiliate stations. The television show will soon begin airing on Free Speech TV (Dish Network, DirecTV, Roku).
Broadcasting from Los Angeles, California, Rising Up with Sonali is made possible by Pacifica station KPFK and the radio version is available to Pacifica affiliate stations for free via Audioport.
Click here to find out more about how to air the show on your TV or radio station.
at October 23, 2017 No comments:

Same controversy, different pipeline. On July 29th, 22 protestors were arrested by Massachusetts State Police (MSP) during an ongoing pipeline protest in Sandisfield. Known as the Connecticut Expansion Pipeline, the natural gas pipeline loop is currently being built below New York, Massachusetts, and Connecticut. Legal battles and public backlash have surged from its inception in 201,4 when Tennessee Gas Pipeline Co., a subsidiary of energy giant Kinder Morgan Inc., submitted a federal application for development.
Read article and see documents at MuckRock
https://www.muckrock.com/news/archives/2017/aug/16/kinder-morgan-115k/

Mohawk Nation News
Please post and distribute.
MNN. OCT. 22, 2017. In 1946 on the first day of school the class in Kahnawake was told by the missionary that the INDIANS would soon disappear. A blue booklet with white letters was handed out called “The Vanishing American” to take home to their families. One father yelled, “It’s a lie. But you have to go to school or I’ll be put in jail. Just pass but don’t learn”. They told us about this fake god they invented. He said, “All life is god according to creation”.

THAT GOES FOR CORPORATE CANADA.