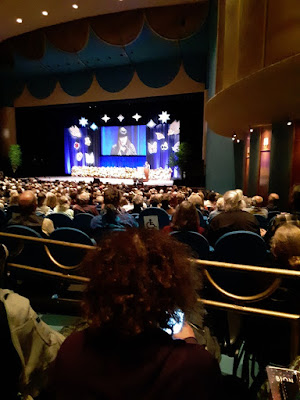 Celebrating truth and beauty at Bioneers

SAN RAFAEL, Calif. -- The Bioneers Conference celebrated 30 years today, with speakers sharing powerful talks on healing, democracy and the state of the news, with a large group of Indigenous presenters and youths present.

Cara Romero, Chemehuevi, said there are 51 Indigenous presenters here, and 250 Natives attending from 99 different Nations at Bioneers.  Romero is the program director of the Bioneers Indigeneity program.
Julian Noisecat, Indigenous Resistance youth presenter, described the Canoe Journey to Alcatraz. and how Alcatraz has been a vision of resistance.

Facebook, Google and the News
The inspiring speakers include Monika Bauerlein, CEO of Mother Jones speaking on the oppression of journalists, especially in Turkey. She described how Facebook makes money "by catering to anger and fear."
In 2017, Facebook began decreasing news appearing in feeds.
"Journalists are losing their jobs faster than coal miners," she told the crowd. At the same time, propaganda and disinformation are on the rise. This is not a coincidence.
Bauerlein said there is hope. There are now 2,000 people working in non-profit newsrooms. She points out that non-profits like Mother Jones have the freedom to write what others, like the New York Times, do not have the freedom to write or publish.
Earlier, Eve Ensler, author of Vagina Monologues, spoke on the sincere apologies necessary from those carrying out sexual and physical violence to their victims.
Other powerful speakers described healing, democracy and regeneration.
Cara thanked San Manuel Band of Mission Indians for sponsoring Native youths.

Sacred Rage and Love
During the afternoon session, Eve Ensler, author of Vagina Monologues, said, everyone needs a crew, a posse, someone who has your back.
"Who do you have in your corner, who do you have that has your back?" She said each person needs people who celebrate them and make them feel safe. Ensler is speaking the panel presentation, "Grief, Sacred Rage, Reckoning and Revolutionary Love."
Bioneers says: "These are the most extraordinary writers, activists and thought leaders of our era: Terry Tempest Williams, Eve Ensler, and Valarie Kaur."
Bioneers writes, "For too long women in general and women of color even more pointedly have been told to suppress their grief and rage
in the name of love and forgiveness. No more. How do we reclaim our emotions in the labor of loving others? What might authentic reckoning, apology, and transformation look like, personally and politically, and where would they ultimately lead us?"
Williams is an award-winning nature author from Utah, who has been arrested for civil disobedience. She spoke earlier on protecting Bears Ears, and the destruction of the oil and gas industry in the Aneth oilfields and elsewhere.
Ensler is the author of Vagina Monologues. She was sexually abused by her father from the age of five to the time she was ten years old. She described the process of healing and how there is a need for a sincere apology from those carrying out sexual and domestic violence. She described her journey to forgive her father.
During the afternoon session, Ensler said, "The most dangerous thing we can do is to be truly loving."
Ensler said, that she once had a pattern of giving all her friends a gift if she felt jealous of them and their success. She said there were lots of people getting gifts that year.
Valarie Kaur is speaking now on love and sacred rage. Kaur is an American civil rights activist, documentary filmmaker, lawyer, educator and faith leader. She was born and raised in Clovis, California, where her family settled as Sikh farmers in 1913.
"You are enough!" Kaur said, at the conclusion of the session attended by hundreds. 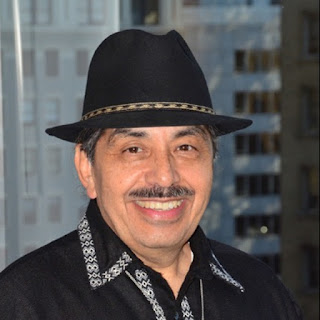 Grandmother's Blessings
An incredible keynote speaker today at the Bioneers Conference is Jerry Tello. Tello spoke of his grandmother and her blessings and how she woke at 4 a.m. to talk with the plants. Of course, as a child, he thought she was crazy. But later as a teen, with Fs in high school history and algebra, he considered taking his own life. But then, there on the streets of Compton, he smelled the scent of his grandmother, he felt her presence, and once again she brought him the blessing.
With great humor, Tello shared his life stories today, and added after this blessing as a teen, that he walked around the tree and found a 20 dollar bill. He encouraged everyone to bless everyone you meet.
Tello also remembered his mother and the life lessons she shared. He grew up with no thought of being poor, but then there were always the beans every day at meals. Now, he realized those beans, picking out the rocks from the dry beans with his mother, was a life lesson, about taking out what is not good for you in life. And yes, he would love to taste again his mother's beans.
Jerry Tello of Mexican, Texan and Coahuiltecan ancestry, raised in South Central Los Angeles, has worked for 40+ years as a leading expert in transformational healing for men and boys of color; racial justice; peaceful community mobilization; and providing domestic violence awareness, healing and support services to war veterans and their spouses. He currently works with the Sacred Circles Center in Whittier, California and is a member of its performance group.


Artists respond at the edges of birth and death

Bioneers writes, "This multimedia storytelling circle centers the embodied experiences of artists rescuing, making, and stewarding creative pursuits on the frontline edges of catastrophe and celebration—as in hurricane, as in border patrol, as in right to choose, as in ring shout! Join four 'culture-doulas' who will share strategies and tactics for survival and regeneration through images, songs and words."


Tara Trudell, daughter of John Trudell, is with Ashara Ekundayo, Independent curator, author of the upcoming Artist As First Responder; Tara Trudell, multimedia artist, photographer, poet, organizer; Angela Wellman, trombonist, scholar, educator, founder, Oakland Public Conservatory of Music. Tara Trudell is a socially and environmentally “engaged” multimedia artist who weaves poetry, photography, film, and audio components into her work. Recently she has tackled issues such as the crisis at the USA/Mexico border. One of her techniques consists of writing poems about topics, then rolling the poems into paper beads that become prayers that transport each poem’s purpose and energy into the world.