Wet'suwet'en Hereditary Chiefs said the meeting with Canada and BC, canceled hours ago because they refused to ask others to stand down, may be back on.

The government is now saying it was all a terrible miscommunication.

"A proposed meeting on Thursday between the Wet’suwet’en hereditary chiefs and provincial and federal government officials could be happening after all, the chiefs tell Global News.

Late Wednesday, Chief Na’Moks (John Risdale) said the meeting, which had been canceled hours earlier, was back on after hearing from the government that a 'terrible miscommunication' was to blame for scuttling the talks.

"I will question them on that tomorrow, to find out what their definition of a ‘miscommunication’ is, because we were very clear that we have more than a willingness to meet with them,” Na’Moks said.


Wet'suwet'en Hereditary Chief Smogelgem said, "Discussions fell apart when we said that we will not tell other Nations what to do on their territories." 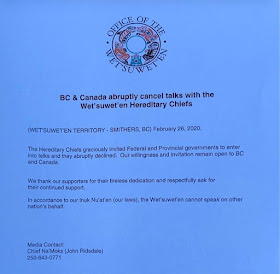