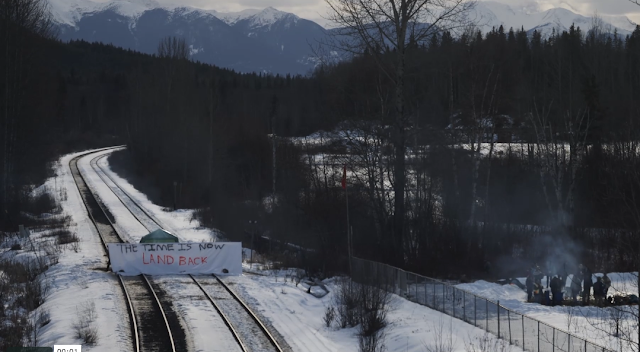 On February 24th, she was filming as Gitxsan hereditary chiefs and supporters blocked the tracks at New Hazelton in solidarity with the Wet’suwet’en and the Mohawks of Tyendinaga. She was wearing a press credential from the National Press Photographers Association.

Ms. Cox had just filmed as the RCMP arrested Gitxsan hereditary Chief Spookw. In spite of the fact that she was clearly marked press, RCMP officers chose to arrest her, thus making it impossible for her to carry out her work documenting and bearing witness to the events underway.

Moreover, RCMP used an undue amount of force, twisting Ms. Cox’s left arm in a painful manner as multiple officers pried her camera out of her other hand, which ripped her headphones off. They tossed her camera on the ground, and later appeared to be manipulating the camera and pressing various buttons. A legal observer asked repeatedly if she could pick up the camera to protect it, requests ignored by the RCMP.

RCMP cuffed Ms. Cox with her hands behind her back which aggravated a pre-existing injury in her left shoulder. She repeatedly stated that her injury was being aggravated and requested that they change the position of the cuffs, which they refused to do as they read her rights and searched her. By this point, she was in tears from the pain.

Having been arrested herself, Ms. Cox was unable to document the arrest of 71 year-old Head House Chief and Matriarch Gwininitxw (Yvonne Lattie), and other arrests made subsequently by the RCMP.

Ms. Cox was held by the RCMP approximately 7 hours and released on restrictive conditions including that she “keep 10 meters off any CN property or work-site.” Abiding by that condition would restrict her ability to cover further rail blockades. Moreover, she is required to appear in court on April 24th, 2020 to face further prosecution.

We are deeply disturbed by the RCMP’s arrest of Ms. Cox, which is part of a pattern of detentions, arrests and efforts to limit the access and mobility of journalists that we have witnessed across the country over the past month. Freedom of the press and other media of communication is a fundamental freedom protected by Canada’s Charter of Rights and Freedoms. In March 2019, a landmark decision by a Newfoundland and Labrador court known as the Justin Brake case reaffirmed that even when an injunction order has been issued, special considerations apply to journalists working in good faith and reporting on matters in the public interest. The decision states that: “To achieve the goal of reconciliation, better understanding of aboriginal peoples and aboriginal issues is needed. This places a heightened importance on ensuring that independently-reported information about aboriginal issues, including aboriginal protests, is available to the extent possible.”

Security forces arresting journalists and filmmakers causes a chilling effect on freedom of speech and interferes with the public’s right to be informed, which are cornerstones of democracy. Transparency and communication in a fair, accurate, nuanced and honest way is also the only basis on which right relations between people and between nations can ever be achieved. This has been Ms. Cox’s stance as a documentary filmmaker, and we wholeheartedly stand with her. We expect that no charges will be laid, and that as matters of public interest related to policing of Indigenous communities continue to unfold throughout Canada, journalists and filmmakers will be able to report and film unimpeded.