U.S. Customs and Border Protection, with the Army Corps of Engineers, is planning to carry out the detonation of Monument Hill.

Currently, federal court cases have been unable to halt the destruction of sacred places, burial places and endangered species for the border wall construction here, near Ajo, Arizona.

Trump has waived all federal laws, including those that protect Native American burial places and endangered species to build the border wall.

Already, the border wall is viewed as a symbol of hate and racism. Besides this, it is ridiculous. An eight-year-old scaled a mock border wall in seconds. In California, a hole was cut out of the wall large enough to drive a truck through it.

In other places, flood gates are necessary at the bottom, which are kept open, providing an open door to anyone. Further, ladders have been used for easy access over the border wall.

The expensive border wall is being constructed at an incredible price to the pristine Sonoran Desert, the people, plants, animals, the water and the ancestors. 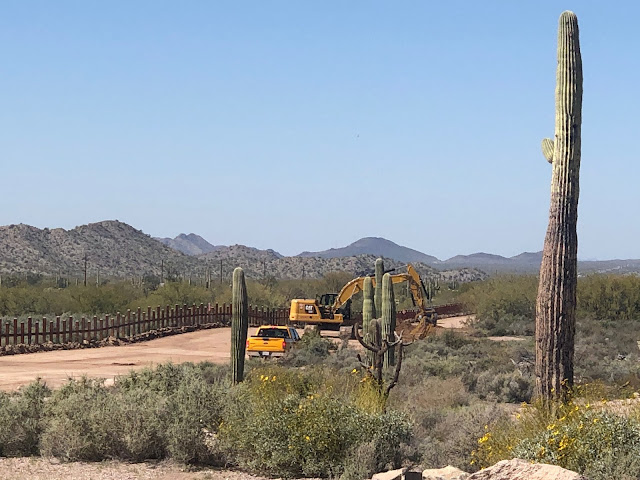 Laiken Jordahl, with the Center for Biological Diversity, has documented the destruction. There are endangered species found nowhere else in the world but here, in this special place in the Sonoran Desert. Quitobquito Spring is a sacred place for Tohono O'odham.

On Monday, Laiken said of the photo above, "A massive excavator just arrived at Quitobaquito Spring."
"It’s digging in the Roosevelt easement just south of the pond, in an area known to contain archeological resources. It’s the same area the O’odham chairman repeatedly requested not be disturbed."

"They’re excavating a literal stone’s throw from Quitobaquito pond—the only place in the world where the endangered Quitobaquito pupfish live. DHS waived all laws that protect endangered species, cultural resources and indigenous graves."

Laiken posted an alert today about the detonation and Congressional hearing. 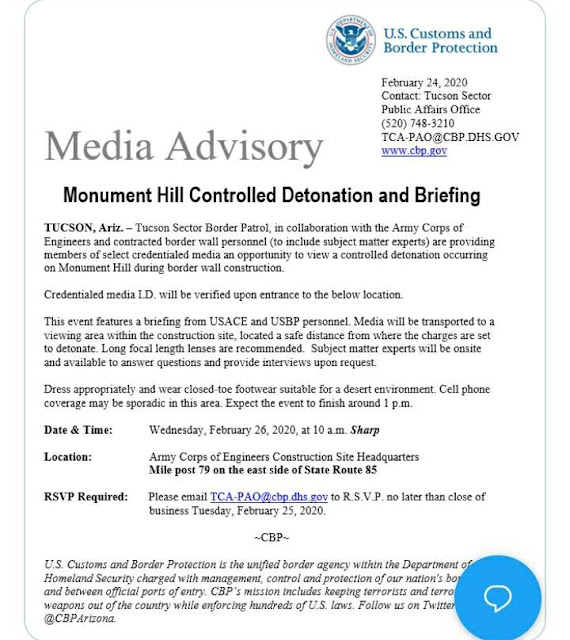 Subcommittee for Indigenous Peoples of the United States

On Wednesday, February 26, 2020, at 2:00 p.m. in Room 1324 Longworth House Office Building, the Subcommittee for Indigenous Peoples of the United States (SCIP) will hold an oversight hearing entitled, “Destroying Sacred Sites and Erasing Tribal Culture: The Trump Administration’s Construction of the Border Wall.”

CONGRESS! You are significant, So passionately play your position. I am telling you why you are here; it is not for your own glory. I am saying to you, Ultimately you will strive to be your best to Lead and serve OTHERS. In doing so you will encourage others to do the same! I am telling you to JUST TRUST ! The vision will come back to you and will lead you directly to your purpose. AND THAT'S HOW WE ALL WIN! I am thankful, no weak spirits will make it through this time. 'This is the time when the strongest spirits will live through and those who are empty shells, those who have lost the connection will not survive.

CONGRESS !!!! You are significant. So passionately play your position. I am telling you, you are her not for your own glory. I am reassuring you, Ultimately you will strive to be your best to lead and serve OTHERS !!! In doing so you will encourage others to do the same !! I am saying to LISTEN; JUST TRUST, the vision will come back in and will lead you Directly to Your Purpose. AND THAT'S HOW WE ALL WIN. I am thankful no weak spirits will make it during this time. This is the time when the strongest spirits will live through and those who are empty shells, those who have lost the connection will not survive . HUMANITY MUST SHIFT FROM LIVING 'ON' THIS EARTH, TO LIVING WITH HER.

As an indigenous person this brings tears to my eyes and rips up my soul.... I pray that our ancestors rest peacefully.... And that we as humans find it within ourselves to not continue such desecration....

As a non-indigenous 76 yr. old male who have a lifetime affinity for all native peoples. I believe this destruction of sacred places is both evil and unnecessary
Our government is supposed to represent all peoples.