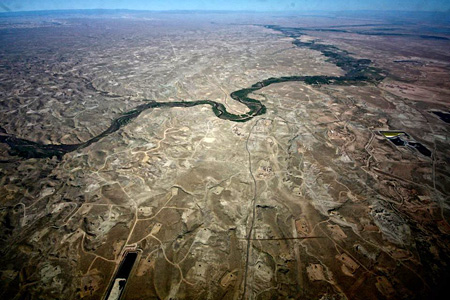 FLAGSTAFF, Ariz.— The Trump administration has suspended 4,200 acres of oil and gas leases on public land in Arizona’s Little Colorado River Valley as part of a joint motion filed in federal court today.

The federal government’s suspension of the leases prohibits any oil and gas activity on the leases until federal agencies complete reviews required under the National Environmental Policy Act, Endangered Species Act and National Historical Preservation Act. In exchange conservation groups are dropping, for now, their lawsuit challenging the legality of the agency’s 2018 approval of the leases without any environmental review.

“The Trump administration’s dangerous Arizona fracking plans stood no chance in federal court,” said Taylor McKinnon, a public lands campaigner at the Center for Biological Diversity. “The administration’s negligent policy of selling fracking leases without any environmental review threatened one of Arizona’s most important aquifers, three endangered species and public health. We’ll do everything we can to protect this beautiful corner of northern Arizona.”

Fracking for oil, gas and helium in the area would industrialize public lands and could pollute air and water in the region’s most important aquifer, the Coconino. It would threaten spills into the Little Colorado River that could harm critical habitat for endangered fish downstream and pollute drinking water for millions of Arizonans.

“No one is above the law, not even the Trump administration,” said Rebecca Fischer, Climate and Energy Program attorney with WildEarth Guardians. “Our lawsuit brought this to the forefront and ultimately helped keep fracking out of northern Arizona. It’s a significant win for our climate, wildlife, and water.”

Companies are targeting the area because of rising helium prices. A recent state permit for helium fracking on nearby non-federal lands authorized acid stimulation on about 80 wells. During that process acid and other chemicals will be injected into rock layers just above the Coconino aquifer, a critical regional water source. Acid fracturing often uses higher concentrations of acid and other dangerous chemicals than conventional hydraulic fracking.

The leased lands straddle the Little Colorado River and Silver Creek, home to two federally protected threatened species: the Little Colorado spinedace, a silvery minnow-like fish, and the yellow-billed cuckoo, a bird known for its distinctive call. The leased lands are also upstream of the largest remaining population of humpback chub in the Grand Canyon, and adjacent to the Petrified Forest National Park, the Navajo Nation and rural communities.

"This is really good news for northern Arizona water and the Little Colorado River,” said Sandy Bahr, chapter director for Sierra Club’s Grand Canyon (Arizona) Chapter. “The impacts of these leases would have been significant, opening the door to more acid fracking, putting at risk our critical water resources, including the aquifer and the Little Colorado. We are pleased the BLM has decided not to proceed without even considering the impacts.”

The Center, Sierra Club and WildEarth Guardians are represented by attorneys Lizzy Potter and Sarah Stellberg of Advocates for the West.