Kahnawake blockade in solidarity with Wet'suwet'en: 'We're fighting for life'

The pipeline protest is blocking the CP rail line in the Mohawk community of Kahnawake, meaning the cancellation of some Exo and Via Rail trains.

James Nolan stood watch at the blockade in Kahnawake early Tuesday. When he arrived to relieve the night shift, there was a local police officer warming his hands by the fire that protesters keep burning near the tracks.

“There are issues that divide us between factions; the longhouse, the band council, the police. This isn’t one of them,” said Nolan, a security guard. “We’re in this together, we’re standing with our brothers and sisters out west, we’re standing with the land defenders.

Nolan, who took his son James Jr. to the blockade, said the structure will stand until the RCMP leaves Wet’suwet’en territory.

Read the article in Montreal Gazette


CBC reports:
So far, the protesters haven't blocked the tracks near Belleville, Ont., but the proximity of their encampment has nonetheless shut down rail traffic along the CN corridor. (CBC)Via Rail has cancelled another 33 train trips departing Toronto for points east Tuesday due to an ongoing demonstration in support of Wet'suwet'en pipeline opponents.

Tyendinaga Mohawk members say they won't end their demonstration near Belleville, Ont., until the RCMP leaves the territory of the Wet'suwet'en in northwestern B.C., where there have been numerous arrests of protesters who have been blocking an access road.

The CN-owned tracks near Belleville run just outside the reserve boundaries of Tyendinaga, but are within a land claim that stretches to Highway 2, just north of the crossing.

The protest camp's proximity to the tracks has prompted the shutdown of passenger and freight traffic since Thursday.
Read more: https://www.cbc.ca/news/canada/ottawa/train-shutdown-mohawk-via-rail-1.5459393 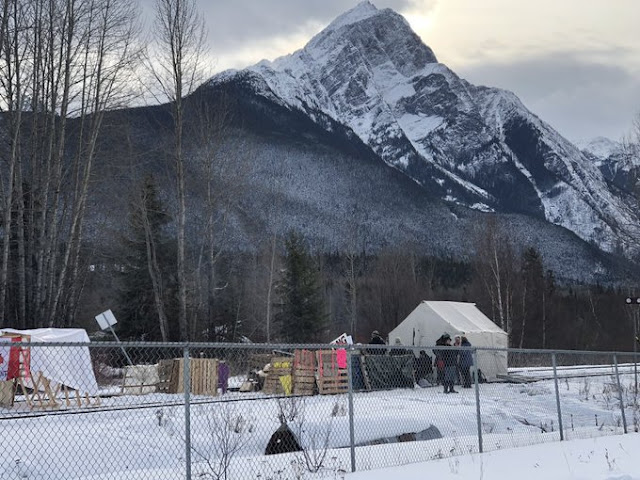 
NEW HAZELTON, BC–CN Rail is stagnant in two areas across the country with Wet’suwet’en protesters blocking access to railways.

In an update from CN Rail today (Feb.10) CN Rail says they are experiencing disruptions in New Hazelton, BC, west of Smithers and in Tyendinaga, ON, near Belleville, ON.24hours of #cnrail being blocked in solidarity with Wet’suwet’en by gitxsan allies. Each day is a million dollars lost by industry. #Wetsuweten #WetsuwetenStrong #alleyesonwetsuweten #gitxsan

Currently, there are no movements of any trains at either of these locations and CN says nearly 200 trains have now been directly impacted by the blockades.

Canadian National Railway Co. says it will be forced to close a “significant” part of its rail network due to ongoing blockades by anti-pipeline protesters, including in New Hazelton.
Protesters have been blocking the tracks in opposition to the Coastal GasLink natural energy project since Sunday. The demonstration is one of many happening across the country in solidarity with the Wet’suwet’en First Nation and its hereditary chiefs.

Canadian National Railway Co. says it will have to temporarily shutter much of its national network because of protests affecting its rail lines. (Ryan Remiorz/The Canadian Press)

Transport Minister Marc Garneau says the federal Liberal government is "very concerned" about growing anti-pipeline protests that are crippling parts of the country's transport network, including one of the main rail arteries in southern Ontario.

Yes knew it woulhappen. Solidarity across country of First Nations and. Friends