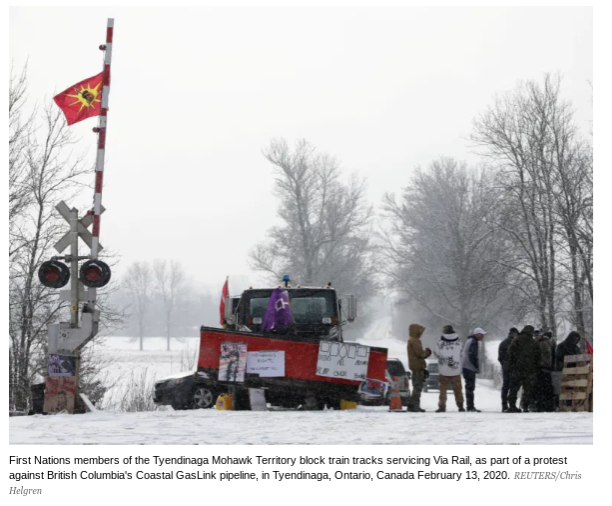 Canadian police used a convoy of heavily armed officers, snipers, dogs and helicopters to arrest a small group of people in prayer, protecting their homes and the homeland of the Wet'suwet'en from the destruction of a gas pipeline. In response, Mohawks and other land protectors have shutdown Canada's railways with train blockades, as bridges, highways and government offices have been shut down.

Today, Via Rail announced it is shutting down all passenger trains.

"Via Rail has no other option but to cancel its services, effective immediately and until further notice," the rail operator said in a statement on its website. Via Rail operates over 500 trains per week across eight Canadian provinces. And 97 percent of track is owned and maintained by other railway companies, mostly by Canadian National Railway (CN).

Across Canada, Shut Down Canada is underway from Ottawa, Halifax and Manitoba to Vancouver, and across Canada. Land Defenders say they will not halt their actions until both the RCMP, Royal Canadian Mounted Police, and Coastal GasLink leave the land of the Wet'suwet'en.

Tyendinaga Mohawks are in their eight-day of a rail blockade that has paralyzed Canada's passenger and freight trains.

Tyendinaga Mohawks said, "The point of the blockade is not to be heard... The purpose is to disrupt Canada's economy and free the Wet'suwet'en from oppression."

In Kahnawake, Mohawks have shut down Montreal commuter trains. Another train blockade is now in Manitoba.

In the brutal assault on unarmed Indigenous People protecting their land, a video just released shows a RCMP sniper aiming a weapon at an unarmed land protector during the raid and arrest of women in prayer.

RCMP and Coast GasLink employees also took down the red dresses hanging as a symbol of the Missing and Murdered Indigenous Women that are victims of the toxic man camps of pipelines.


Unist'ot'en Camp said, "Canada tears us from our land, our families, our homes. Takes our drums away, takes our women away. Jails us while we are in ceremony honouring our ancestors."

"It is time to fight for our land, our lives, our children, our future."


As Shut Down Canada continues, Indigenous Youth in Solidarity with Wetsuweten locked down to the ceremonial gate in Lekwungen territories, at the BC Legislature.

In Vancouver, police arrested 43 supporters of Wet'suwet'en blocking the Port of Vancouver at three entry points on Monday. Hundreds of land defenders blocked trains in Toronto.

While Shut Down Canada is underway, Canada's Prime Minister Justin Trudeau is on a tour in Africa lobbying for Canada to have a seat on the United Nations Security Council.

However, support for Wet'suwet'en is pouring in from as far away as South Africa, as people around the world demand respect and freedom for Indigenous Peoples, and their land.

Canada's bizarre surveillance of land, water and forest defenders is exposed in a new article by Apihtawikosisan that shows the ranking charts of activists based on their Facebook posts and attendance at gatherings. https://apihtawikosisan.com/2020/02/taking-surveillance-seriously/?fbclid=IwAR3r2DuYHejiWXrGL36wuWzzttrsvcQO9fwb2RejnDEc7GA9HTn8IGSAI3M

In related breaking news, The Intercept exposes how a Sheriff's Department in Oregon was bought by a pipeline and the role played by the mercenaries TigerSwan in North Dakota during the movement to protect the land and water at Standing Rock. The article by Will Parrish and Allen Brown is
'Paid by the Pipeline: A Canadian Pipeline bought an Oregon Sheriff's Unit.'

Referring to Pembina Pipeline Corp., Brendan McQuade said, “Pembina and other corporations are trying to build out the infrastructure now to lock us, as a planet, into using big reserves of fossil fuel.” McQuade is assistant professor of criminology at the University of Southern Maine and author of a recently released book on police fusion centers.

Meanwhile, in South Dakota, a second attempt is being made to criminalize protesters exercising their right to Free Speech by politicians that are protecting the ongoing land grab of Indigenous Peoples lands. Politiciand are protecting their political donors in the oil and gas industry.

The ACLU said it is an attempt to intimidate peaceful protesters.

The #CoquitlamRailBlockade is part of a Wet’suwet’en defence movement that is spreading as Indigenous nations blockade rail lines, exercising their sovereign control over their territories

On Thursday February 13th we are beginning a blockade of the rail line in Coquitlam, at the most important CP train yard in Metro Vancouver. Our land defence action is part of the movement to #ShutCanadaDown in defence of Wet’suwet’en sovereignty, and also backs up, stands with, and celebrates the exercise of sovereignty and land defence at Tyendinega, Treaty 1, and Gitxsan territories.

On Thursday February 6th, the day that the RCMP began its raid on Wet’suwet’en territory and the Unist’ot’en Camp, Tyendinega Mohawks blockaded the CN rail line that trespasses their territory. In the week since, more Indigenous nations have started rail line blockades, stopping traffic on the original infrastructure of Canada’s settler colonial project.

In a statement released on February 12th, the Tyendinega Mohawk Kanenhariyo explained that their blockade is an expression of the Two Row wampum, which is “the basis of the relationship between the Onkwehon:we and the newcomers.” The Two Row wampum “doesn’t have an expiry, it doesn’t grow whiskers or get old, it doesn’t become obsolete unless one of the parties in the river disappears,” Kanenhariyo said.

Kanenhariyo explained that the Two Row wampum agreement is also one of co-operation. “It said that if there was ever rough waters ahead that we could reach over and stabilize each others boats. We had the responsibility to inform the other boat if there was troubled water ahead.” Kanenhariyo paused before addressing the OPP, “it seems there is some troubled water.”

On Friday February 7th, the Ontario Superior Court issued an injunction ordering the removal of the Tyendinaga blockade. But nearly a week later, it has not been enforced. On Wednesday February 12th, Tyendinaga Mohawk Police Chief Jason Brant pleaded with the land defenders to end the blockade. In response, the Tyendinega Mohawks set up a second blockade on the rail line.

Also on February 12th, land defenders on Treaty 1 territory set up a rail blockade on a section of CN rail track about 7km outside of Winnipeg. Harrison Powder, one of the land defenders, explained to a CBC reporter that the blockade was in support of Wet’suwet’en sovereignty. “When you invade Indigenous territory, and you try to force pipelines on our people, there’s consequences to that, and this here today is one of those consequences,” he said, “We want the RCMP out of there.”

But he also framed the blockades as “a long time coming;” the roots are resistance against Canada’s continued colonial violence against Indigenous peoples. “Our people have been saying for years ‘we can shut down this country, we can stop the economy, we can cause major economic damage’ — and it’s happening now,” he said.

The Wet’suwet’en nation’s heroic land and sovereignty defense has started a movement that is focused on defending the Wet’suwet’en nation, but which has quickly taken on a more radical, fundamental meaning. The sustained rail blockades at Tyendinega, Treaty 1, and Gitxsan, as well as the urban blockades of rail, port, and highways, show that the united struggle against Canada’s settler-colonial violence is growing, not going away.
OCCUPATION OF OFFICE OF MLA and ATTORNEY GENERAL DAVID EBY IN SUPPORT OF WET’SUWET’EN NATION

February 13, 2020 Coast Salish Territories / Vancouver BC: Urban Indigenous sovereigntists and supporters of the Wet’suwet’en Hereditary Chiefs are occupying the office of MLA and Attorney General David Eby to demand the immediate withdrawal of the RCMP and Coastal GasLink from unceded Wet’suwet’en territory.

The past seven days have seen daily civil disobedience actions in Vancouver including blockades of the Port of Vancouver and Deltaport as well as rail lines and the Granville Bridge. Hundreds of supporters of Indigenous sovereignty have joined urban Indigenous sovereigntists in the streets to express solidarity with the Wet’suwet’en Nation.
Herb Varley, Haida, Nisga’a, Tlingit, and Nuu-chah-nulth organizer of Vancouver solidarity actions states: “The Wet’suwet’en Hereditary Chiefs are practicing Anuk Nu’at’en (Wet’suwet’en Law) in opposition to the colonial Canadian legal system. We are disrupting business as usual in David Eby’s office to highlight his hand in the ongoing genocide of Indigenous peoples required by the Canadian colonial project.”
Natalie Knight, Yurok and Navajo organizer asserts:“It was only a few decades ago that Indigenous peoples in Canada were not legally allowed to assemble in groups of more than three, seek legal representation, or in Coastal Salish territories, practice the potlatch ceremony. Today’s crisis between Wet’suwet’en and the Canadian government is yet another flashpoint that reveals the inherent injustice embedded in the uneven and unequal relationship between the Canadian government and Indigenous Nations.”
The group of Wet’suwet’en supporters are occupying the office until David Eby meets the following demands:
Revoke all permits associated with LNG Canada and Coastal Gas Link’s $40 billion fracked gas projects until the projects meet the standards of free, prior, and informed consent under Anuk Nu’at’en and UNDRIP, the full principles of which your government made into law at the end of November, 2019.
Use your power as an Executive Council member to intervene in the injunction and enforcement order against the Wet’suwet’en Hereditary Chiefs. This order clearly violates and criminalizes the right of the Wet’suwet’en to occupy, manage, and maintain their lands.
If you are unable to uphold your responsibility to Anuk Nu’at’en as well as the principles of UNDRIP, we demand that you resign from the Executive Council immediately.