Wet'suwet'en Allies block rails after 30 plus arrested at Vancouver ports 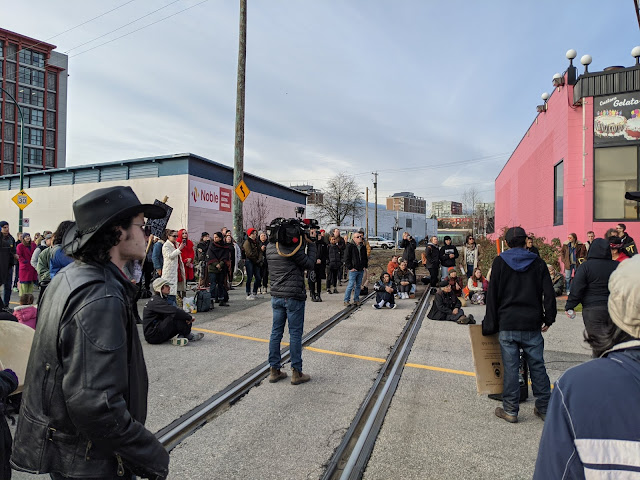 On the morning of February 10th 2020, police enforced the injunction against supporters of Wet’suwet’en Hereditary Chiefs blocking access to the Port of Vancouver and Deltaport. 30+ peaceful demonstrators were arrested.

“Our eyes are on the genocide taking place on unceded Wet'suwet'en territories.“ said Natalie Knight who is a part of the urban Indigenous leadership of these blockades. “Today, matriarchs at the Unist'o'ten camp were arrested while they were in ceremony. For as long as RCMP continue their violent invasion, we will act to disrupt business as usual for the Canadian economy.”

Supporters of Wet’suwet’en Hereditary Chiefs blocked access to the Port of Vancouver for four straight days and the Deltaport for over 30 hours before arrests began this morning.

Demonstrators are demanding respect for Anuk nu’at’en (Wet’suwet’en Law) and Wet'suwet'en sovereignty which means an end to the RCMP’s violent police raid. Supporters are calling on Coastal GasLink, the BC government, and the government of Canada, to stop their colonial violence against peaceful Indigenous land defenders. Militarized RCMP armed with sniper rifles continue to escalate their invasion of sovereign and unceded Wet’suwet’en territory.

“Our mass movement includes community members, labourers, students, mothers, and working class people following urban Indigenous leadership to hold several picket lines, effectively shutting down the Port of Vancouver, in solidarity with the Wet’suwet’en,” Natalie Knight asserted. “We shut down the Port of Vancouver for the last four days. We will continue mobilizing until the colonial violence on unceded Wet'suwet'en lands comes to an end."