CANADA: Rail Blockade in Second Week in Solidarity with Wet'suwet'en

Shut Down Canada is in the second week, with trains shut down and ports stalled

Rail blockades across Canada are now in the second week. VIA Rail announced it has shut down its nationwide system because of the blockades. Tyendinaga and Kahnawake Mohawks said the rail blockades near Toronto and Montreal will continue until Canadian police, RCMP, and Coastal GasLink leave the land of the Wet'suwet'en on the western side of the country.

After days of arrests with high-powered weapons, dogs and helicopters, resulting in the arrest of a small group of women in prayer, RCMP dismantled camps and attacked peaceful land defenders of the Wet'suwet'en protecting their homes and homeland from the destruction of the gas pipeline and its toxic man camps.

"There’s still a heavy cop presence on the territory. Multiple cop vehicles patrolling a 40km stretch of logging road leading to Unistoten. They’re stopping all vehicles except for industry. Govt doesn’t seem to hear the Wet’suwet’en. All Rcmp off the territory," Rob said on Twitter this morning.

Christi Belcourt reports this morning from the frontline of the Tyendinaga Mohawk blockade. The federal Indigenous Services Minister met at the tracks on Saturday morning with Mohawks.

Kanenhariyo Seth LeFort said, “Words are powerful but actions are meaningful. Your country hasn’t treated us well. There is a suspicion that there will be a trick here. That what you say will be different than what you do. Your ancestors came here and were not in a position of power. When they met us we gave them medicine. We helped them. There is a want or desire to pretend you came here and dominated us but that isn’t true. There was a time when we were strong and you were weak. I don’t mean to highjack you. But we’re concerned there will be a trick. There will be an attempt that so says the Indians aren’t being fair.”

“The foundation of our relationship is based on this. We are in our ship and all our ways are there. You are in your ship with your customs. And your courts and laws over yourselves. And we were not supposed to steer each other’s vessel. You stole our children to wipe our mind so they didn’t remember about this. But for 100 years you did the same thing to your own children. You wiped their minds of our relationship. If we are to continue forward we can only do that on the basis of the relationship our ancestors had with each other. And if we can’t respect that relationship with each other then we can’t talk. Because we will be dominated and we are small. It’s our treaty together. All of us. Together. And the animals. We are not separate. You too.”

MLT Blog reports, "As land protectors continue to come out in support of the Wet'suwet'en people of British Columbia, Canada has been paralyzed. After the RCMP began making arrests to break up blockades of worksites for the Coastal GasLink pipeline, which would pass through unceded territory, groups took up in protest across the country. Now, new blockades have managed to indefinitely suspend rail services in several provinces, in addition to all but two VIA Rail train lines.
https://www.mtlblog.com/news/canada/qc/montreal/wetsuweten-solidarity-protest-in-kahnawake-ready-for-the-long-haul-photos

.
Residents of the Mi'gmaq First Nation of Listuguj, in Quebec’s Gaspé region are holding strong in support of the Wet’suwet’en.
"About five or six people from the Mi'kmaq community of Listuguj, about 525 kilometres northeast of Quebec City by the New Brunswick border, have set up a campsite a few feet away from the tracks, said Eric Dube, president of the Chemin de fer de la Gaspesie." More here.


RCMP also confirm that one of their officers used a rifle scope to observe members of the Wet’suwet’en and their supporters at one of the occupation camps. Read more.

Prime Minister Trudeau in Germany says he will not force RCMP to end rail blockades, but leaves it up to RCMP.


Prime Minister Justin Trudeau urged those demonstrating in solidarity with hereditary chiefs of Wet’suwet’en Nation to ease up blockades along rail lines on Friday, but motioned that the federal government does not have plans to order RCMP action.“We are not a country where politicians can order the police to do something, we are a country that has confidence in its police forces and allows them to do their work in the scope of these blockades,” Trudeau said, while speaking to reporters in Germany." Read more.


More than 60 shipping vessels stalled off B.C. coast due to rail blockades 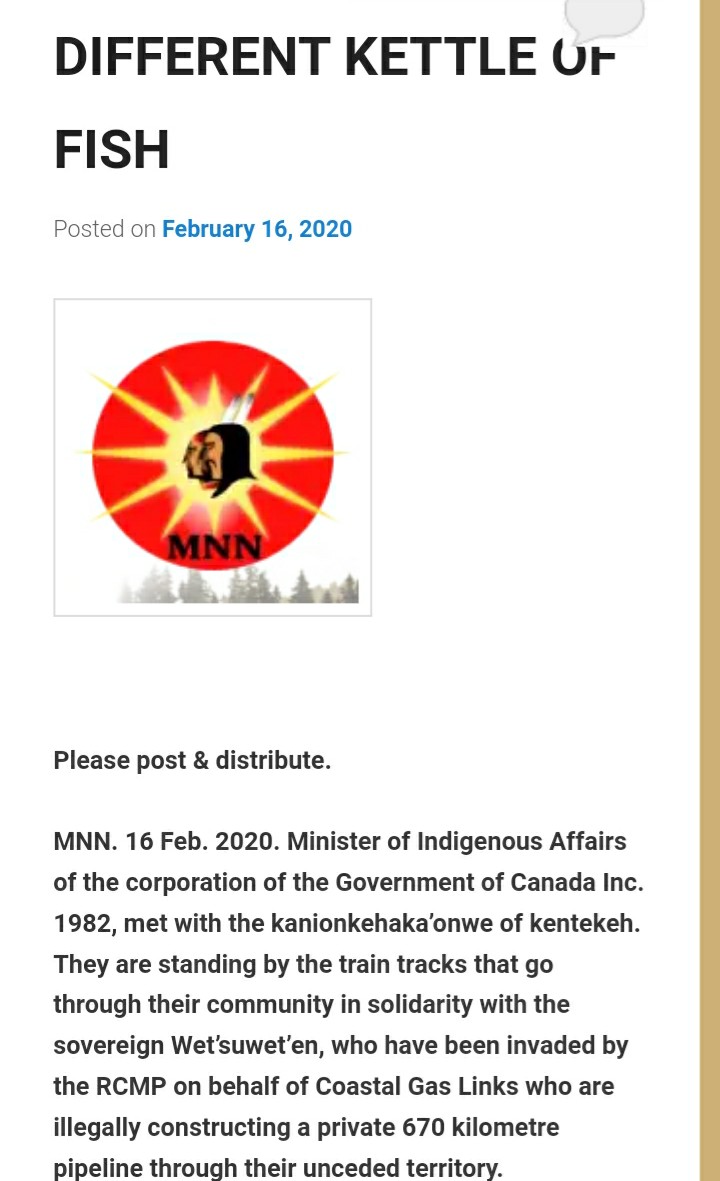