Wet'suwet'en Hereditary Chiefs Remain Resolute Against RCMP Occupation of Yintah while Prime Minister Trudeau states "the injuctions must be obeyed and barricades must come down."


Note: This statement comes after Trudeau's announcement Friday afternoon that all rail blockades must come down now. A SWAT team was dispatched to the rail blockade at St. Lambert in south Montreal. Then, about 10 pm, rail blockaders said a line of police were approaching, and then, "It's all over for now." Rail blockades continue throughout Canada.  -- Censored News

[Feb 21] Wet'suwet'en Hereditary Chiefs remain resolute in demanding the full retreat of RCMP from their traditional territory (Yintah) this hour, as the Prime Minister (PM) shifts towards enforcement.

Conceding to the concerns of industry, the PM stated in a press conference this afternoon that "we have reached the limit of what we can do 'unilaterally' as the Federal Government, and now it is up to indigenous leaders to find solutions to continue on the path of reconciliation."

The Wet'suwet'en Hereditary Chiefs met with Mohawks at Tyendinaga and issued a statement earlier today.
https://bsnorrell.blogspot.com/2020/02/wetsuweten-hereditary-chiefs-meet-with.html
Now, a SWAT Team has the St. Lambert Rail Blockade surrounded. Time: 4 pm Friday.
Prime Minister Trudeau said just now in a press conference: "The barricades must come down now."
Trudeau said the possibility of an Oka situation developing had been one reason for the delayed action in regards to the rail blockades.
At the rail blockades, Wet'suwet'en Solidarity said at 4 pm, "There is a line of 8 cops with batons down the tracks."
"Many cops in area, streets currently blocked."

CBC reports at 4 p.m. on Friday, "Longueuil police closed St-Georges Street, which crosses the train tracks near a rail blockade on Montreal's South Shore on Friday afternoon.
"Clad in black ski masks, several officers are standing in a semicircle near the makeshift encampment and media has been pushed back from the site. A mobile command post is also parked nearby, with about a dozen other police officers milling around it.

"The protesters have been told to leave the site by 5 p.m."
https://www.cbc.ca/news/canada/montreal/saint-lambert-blockade-1.5470998
Trudeau press conference video:
https://www.cpac.ca/en/direct/cpac4/410276/pm-trudeau-holds-news-conference-on-govt-response-to-blockades/

In the news:
“The barricades must now come down. The injunctions must be obeyed, and the law must be upheld,” Trudeau said, adding later in French that it would be “lamentable” if police need to step in to clear the blockades.

February 21, 2020
TYENDINAGA – Today, the Mohawk people and Wet’suwet’en people stood in solidarity at the Mohawk Council House in Tyendinaga to affirm that they will not stand by and watch while Wet’suwet’en title and rights over their lands are ignored and while human rights abuses continue to happen in Wet’suwet’en territory.
Contrary to the announcement by the BC RCMP on February 20, 2020 that they are withdrawing from Wet’suwet’en territory, the Hereditary Chiefs of the Wet’suwet’en confirmed at the meeting that the BC RCMP and CIRG have in fact increased harassment, made illegal arrests, increased surveillance, and monitoring of Wet’suwet’en people and their invited guests. This is completely unacceptable and far from a show of good faith and contradicts the announcement by the BC RCMP.
Both the Wet’suwet’en Hereditary Chiefs and the Mohawk People in Tyendinaga remain deeply concerned by the myriad of laws that Canada has broken including Wet’suwet’en law, the Canadian Constitution, the Supreme Court of Canada Delgamuukw decision of 1997, UNDRIP and the Geneva Convention on Genocide.
They want to remind Canada and the world that Wet’suwet’en land was never ceded or surrendered and as such Canada’s actions amount to an illegal occupation in Wet’suwet’en territory. They also want to remind the Canadian Government that the rail line shutdowns could have ended many days ago if only Canada, BC, CGL, and the RCMP had honoured their own laws as well as respected Wet’suwet’en laws.
The Wet’suwet’en Hereditary Chiefs have put a path of peace forward in order that nation-to-nation discussions with Canada and BC may occur freely and without duress:
“We demand that the remote detachment (Community Industry Safety Office) established by the RCMP on Wet’suwet’en territory without our consent be immediately removed and that the RCMP are completely removed from our territory and cease patrols from our lands. Out means out.
We demand that all CGL activities cease within Wet’suwet’en territory while nation-to-nation talks are ongoing as pursuant to the eviction notice that was delivered to them on January 4th, 2020.
We commit to entering into nation to nation discussions with Canada and BC once the above two demands are met and we insist when these discussions occur, that they will be held on Wet’suwet’en territory to ensure inclusivity for our nation’s Dini ze’ and Tsakiy ze’ (Hereditary Chiefs), and the members we are accountable to, in accordance with our law. “
The meeting today came on the heels of a nine-hour meeting between the Mohawk People of Tyendinaga and Minister of Indigenous Services, Mark Miller on February 15, 2020. All sides have said are keeping the discussions open and remain hopeful. Since the beginning, the Mohawk people of Tyendinaga have stated their willingness to allow the trains to pass through their territory and remain committed to do so once it is verified by the Wet’suwet’en Hereditary Chiefs and their appointed legal observers that the BC RCMP are indeed out of the territory. Upon confirmation, the Mohawks have agreed to negotiate the peaceful exit plan as agreed upon between the Mohawks and the Minister of Indigenous Services Canada, Marc Miller.
The Wet’suweten Hereditary Chiefs also want to reiterate to Ministers Carolyn Bennett and Marc Miller that they remain willing to enter into Nation to Nation talks once the RCMP is out of their lands and all work by CGL has ceased.
For further information please go to: yintahaccess.com" 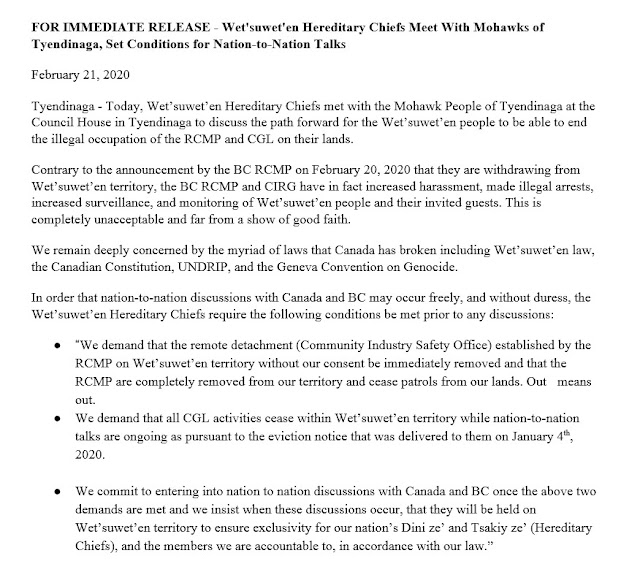 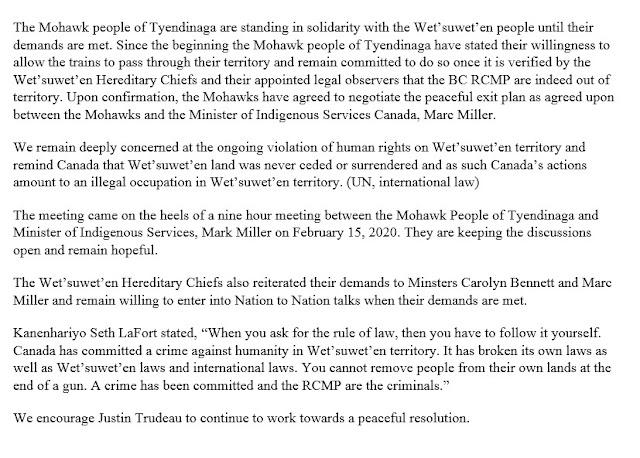