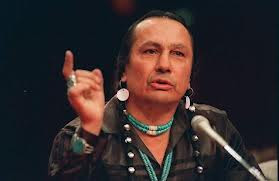 Russell Means: "I think its important to struggle to find out who you are. By any means necessary."

Russell became more controversial than ever in later years. The following article concerning Obama at Censored News attracted a blast of negative reactions. Russell was never homogenized and always went against the flow, against conformity, as in this article where Russell supports Palestinians and points out Obama's support of Zionists. --Censored News

American Indian activist Russell Means said President-elect Obama was selected by the colonial powers as president to improve the US image globally in the aftermath of George Bush. Further, Means said Obama’s appointments show that he is a Zionist controlled by Israel. Speaking on Red Town Radio today, Means said what is happening now to Palestinians is what happened to American Indians.
“Every policy the Palestinians are now enduring was practiced on the American Indian,” Means said on the Blog Talk Radio show, hosted by Brenda Golden, Muskoke Creek. “What the American Indian Movement says is that the American Indians are the Palestinians of the United States, and the Palestinians are the American Indians of the Middle East,” Means said. Further, he points out that the Zionists who control Israel now control the United States. “The power of the US in world politics diminishes every day.”
“Now they have found a house servant by the name of Obama.” Means said Obama was selected as a “man in charge to take the heat,” because of the “bad cop” image that Bush put forth in the world. “Now, all of a sudden, it is, ‘We’re so great. We elected a black man to be president.’”
Means added that Obama is a black man who was raised by his white grandmother and has appointed Zionists to key positions and that the US is headed for a new era of menial jobs. On Indian lands, Means reminds us, the only people who get ahead are those who sell out to the colonial system. Now, there is massive and sophisticated propaganda by the Zionists and the U.S. Both countries, he said, are liars. In the US, American Indians have been shut out of history, philosophy and the arts, in a “total blackout.” The United States does not want to be reminded of the smallpox blankets, theft, colonialism and mistreatment of the American Indian, he said.
Read more:
http://bsnorrell.blogspot.com/2009/01/russell-means-breaking-silence-on-obama.html
.
.
at November 24, 2012 1 comment:

By Rebecca Sommer
Censored News
Namibia, 24 Nov 2012: Hundreds of semi-nomadic Himba from Omuhonga and Epupa region marched today from their villages to Okanguati, a small town about 120 km away from Opuwo, to protest against Namibia’s human rights violations against them.

(Photo © Rebecca Sommer) Chief Hikuminae Kapika signing the invitation to the UN Special Rapporteur on the rights and fundamental freedoms of Indigenous Peoples to visit them
These violations, documented and signed by the Himba chiefs of the entire Himba territory (Kaokoland) in two historic Declarations have been submitted by Earth Peoples to the United Nations on February 23rd in 2012.
The Himba from Epupa and Omuhonga also wrote an invitation letter to the UN Special Rapporteur on the Rights of Indigenous Peoples, which was also forwarded by Earth Peoples to the UN system at the same day.
The United Nations Special Rapporteur on the situation of human rights and fundamental freedoms of indigenous people, James Anaya, visited the Himba in September 2012, where a Himba spokesperson read aloud the Himba Declaration once again to him. You can read the UN Special Rapporteur’s statement here.
“We invited Namibian Broadcasting Cooperation (NBC) to come, but they refused to attend our protest manifestation” said Motjimbika Mutambo, a respected community leader from Himba village Omuhonga.“We handed our petition and demands to our elected Epupa Regional Councillor, the Honorable Muharukua, with the expectation that he will forward it to the President” Mutambo added.
Councillor Muharukua, who is a Herero, explains the problems of the Himba people in this Video with English subtites

(Photo © Rebecca Sommer) Muhapika Munjombara signing the Himba Declaration
“We don’t understand why we have to repeat ourselves over and over again, and the Government of Namibia is not listening to us, and is continuing to push for the construction of the dam in the Baynes Mountains without our consent. We collectively refused the money offered to our communities and families that would have to relocate” said Hikuminae Kapika, the Chief from the area of Epupa and Omuhonga. “We have these big mining companies making holes in our land, making roads where we graze our herds, and we don’t want that. We don’t know what they are digging out, we have no idea what they do to our water and land, and we don’t want them here. Nobody asked us for our permission.” He added.
“If the government is going to build the dam they better kill us first before they do that. This is our land. We are the original inhabitants and true owners. But since independence, the Government of Namibia has dispossessed us from our rights to our land, and our rights to decide what is being done with and on it.” Said Muhapika Munjombara.
Members of the indigenous peoples Zemba also attended the protest march. They also submitted through Earth Peoples their Human Rights violation Declaration to the United Nations.
In the Zemba Declaration, it is stated:

Zemba/Ovazemba (Photo © Rebecca Sommer)
In the past our appointed leaders had to belong to the royal house, but that has changed over the time. Today, we elect our leaders. But to our great grievance, Namibia denies us not only our rightful place as legitimate Namibian citizens, with untrue claims that we are refugees from Angola, but also denies us our right to our land, and to choose our own representatives and leaders.
We demand that we get our right to choose our own representatives and leaders, and to be allowed to administer our internal affairs, including our territory and land, and to rule our affairs with our own customary laws and traditional courts.
We demand that the Government of Namibia recognizes without delay our chief as the legally recognized Zemba Traditional Authority.