Dine' Bidziil 'One Mind, One Voice, One Prayer' 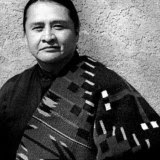 
DINE BIDZIIL: "One Mind, One Voice, One Prayer"