Zapatistas Marcos 'Ellos y Nosotros' Them and Us 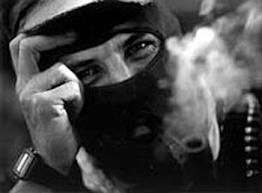 Them and Us, Part 1: The (Lack of) Reason from Above by Subcomandante Marcos

Those from above say:

"We're the ones who make the rules.  We're more powerful, although there are fewer of us.  We don't care what you say-hear-think-do, as long as you are mute, deaf, immobile.

"We can impose halfway intelligent people in the government (although they're already getting to be difficult to find within the political class), but we chose one who can't even pretend to know what he's talking about.[1]

"Why? Because we can.

"We could use the police and military apparatus to persecute and jail real criminals, but those criminals are a vital part of us.  Instead, we choose to persecute you, beat you, detain you, torture you, jail you, kill you.

"Guilty or innocent?  Who cares if you are one or the other?  Justice is just another whore in our little black book, and believe us, it's not the most expensive one.

"And even if you follow the rules that we impose to the letter, even if you don't do anything, even though you might be innocent, we will squash you.

"And if you insist on asking why we do it, we'll respond: because we can.

"That is having Power. A lot is said about money, riches, and those things.  But believe us when we say that what excites us is that feeling of being able to make decisions about anyone's life, liberty, and assets.  No, power is not money, it's what you can have with it.  Power is not just exercising it with impunity, it is also and above all, to do it irrationally.  Because having Power is to do and undo without having any other reason than the possession of Power.

"And it doesn't matter who stands out in front, hiding us.  Right and left are only references so that the chauffeur can park the car.  The machinery runs itself.  We don't even have to order them to punish the insolence of defying us.  Large, medium, and small governments all over the political spectrum, as well as intellectuals, artists, journalists, politicians, and religious leaders fight over the privilege to please us.

"So fuck you, screw you, rot in hell, die, get discouraged, give up.

"To the rest of the world you don't exist, you are no one.

"And, nonetheless, we fear that which has transformed itself into organized rebellious rage, without a price tag.

"Because we control, manage, ration, and feed the chaos that we impose.  Our 'law enforcement' forces impose our chaos.

"But the chaos[2] that comes from below…

"Ah, that… we don't even understand what they say, who they are, how much they cost.

"And they're so rude that they don't beg, await, request, plead--instead, they exercise their freedom.  Have you ever seen such obscenity!

"That is the real danger.  People who look on the other side, who leave the mold, or break it, or ignore it.

"You know what's really worked for us? That myth about unity at all cost.  To only understand oneself with a boss, leader, ruler, or whatever they call themselves.  Controlling, managing, containing, buying one is much easier than many.  Yes, and cheaper.  That and individual rebelliousness.  It's so wonderfully useless.

"Rather, what's really dangerous in a true chaos is when every one becomes a collective, group, crew, raza, organization, and they learn to say 'no' and 'yes,' and they reach agreements amongst themselves.  Because the 'no' is directed towards those of us who give the orders.  And the 'yes,'… geez… that really is a disaster.  Imagine if everyone built their own destinies, and they decided who to be and what to do.  It would be like pointing out that we're expendable, excessive, that we get in the way, that we're not necessary, that we should be in jail, that we should disappear.

"Yes, a nightmare.  Yes, of course, for us.  Can you imagine how bad that world would be?  Full of indians, blacks, browns, yellows, reds, dreadlocks, tattoos, piercings, studs, punks, goths, cholos, skaters, that 'A' flag without a nation to buy it, youth, women, whores, children, the elderly, zoot suiters, drivers, peasants, workers, tacky people, proles, poor people, anonymous people… others.  Without a privileged space for us, the 'beautiful people'[3]… or, so you understand us, the 'good people'… because we can tell by the way you talk that you didn't study at Harvard.

"Yes, that day would be night for us… Yes, everything would be ruined.  What would we do?

"Hmm… we hadn't thought about that.  We think, we plan, and we execute what to do so that it doesn't happen, but… no, that hadn't occurred to us.

"Well, in any case, well….hmm… I don't know… perhaps we would look for who to blame, and then, well, we'd look for, I don't know, a Plan B.  Of course by then it would be useless.  I think that then we would remember what that damn red Jew said…no, not Marx… Einstein, Albert Einstein.  I think it was him who said: 'Theory is when you know everything and nothing works.  Practice is when everything works and no one knows why.  In this case we have combined theory and practice: nothing works… and no one knows why.'

"No, you're right, we wouldn't even be able to smile.  A sense of humor has always been an non-expropriable patrimony.  Isn't that a shame?

"Yes, without a doubt, these are times of crisis.

"Hey, aren't you going to take pictures?  I mean, so we can fix our hair and put on something a little more presentable.  Nah, we already tried that in 'Hola'[4]… oh, but what are we saying, it's obvious that you haven't gotten past [the comic book] 'El Libro Vaquero.'

"Oh, we can't wait to tell our friends that someone so… so… so… other came to interview us.  They're going to love it.  And, well, it's going to make us seem so cosmopolitan…

"No, of course we're not afraid of you.  Regarding that prophecy… bah, it's superstition… so… so… native… yes, so Region 4 [5]… hahahaha…what a good joke, let's write that down for when we see the kids…

(…) (the tee-tu-ta-ta-tatatata sound, from the smartphone)

"Hello, police? Yes, I'd like to report that someone came to see us.  Yes, we think he was a journalist or something.  He looked so… so… so other, yes.  No, no, he didn't do anything to us.  No, he didn't take anything.  It's just that, as we were leaving to go to the club to see our friends, and we see that someone has painted something on the entrance to the garden.  No, the guards didn't see who it was.  Of course not!  Ghosts don't exist.  Well, it's painted with a lot of colors… No, we didn't see any paint cans nearby… Well, as we were saying, it is painted with a lot of colors, so colorful, very tacky, very other, not anything like the galleries where… what?  No, we don't want you to send a squad car.  Yes, we know.  But we're calling to see if you can investigate what the painting means.  We don't know if it's a code, or one of those strange tongues that the proles speak.  Yes, it's just one word, but we don't know why it makes us shudder.  It says:

From any corner of any world.

Listen to and watch the videos that accompany this text:

a.- Pacheco
-------------
"Pachuco," by La Maldita Vecindad y los Hijos del 5to Patio.  Video is from the perspective of "from below," that is, in the middle of the mosh pit.  The moral of the story: don't record while you're on the trampoline.  And what the heck, Maldita?  Don't be so idem and get it together.  Or what, you're just going to leave the raza to the mercy of the Justin Beibers of the world?  Fine, greetings from Solin, because you guys really did understand that the communities are pure Kalimán.[7]
_____________________
b.-"More for your money."