Navajo filmmaker Arlene Bowman reflects on the mystery and magic of salmon in Vancouver, BC 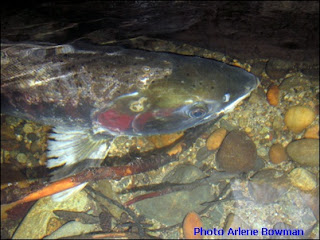 Almost six weeks now since I saw first saw the salmons swim to their homeland to spawn in a small stream close by at Hyland Creek, Surrey BC.   A few sockeye swam in the pools. December 19th I saw a red male salmon swim alone in his pool, the only salmon left, but on December 21, 2012, Friday I saw him with a female salmon partner. Today is January 5, 2013. I wondered last Tuesday, what will happen to this male salmon?  No female to spawn with unless the other females return who swam fast away. I do not know where she came from but it happened. Maybe she is one of those who returned.

Visited often. I wrote a journal about the salmons in the streams I viewed and checked; also I took still photos and videotaped the salmons.  This is the first time ever I saw big fish swim in small streams: the sockeye salmon.  I am not a fish or salmon expert. Now hardly any salmon exist in the small pools in the stream except the pair near the tree root since November 25, 2012.  Now she has gone, too.

To read-view documentaries about salmon is one thing, but to view live salmons is another. Sometimes these salmons, their heads, eyes, fins, tails, green olive skins with black spots showed halfway as they rested or below the water level. Sometimes to evade they dived deeper. In twilight the white stripe that runs across the top of their bodies, worn out scales swayed in a long S letter. Red male salmons and females swished and wiggled their bodies fast, splish, splash across smooth slippery rocks in thin streams. Once in a lifetime, I never experienced this among living things, except for kittens being born.

I looked at a map, which illustrates tributaries in Surrey.  My partner and I assessed the Serpentine River might be the only possible route the salmons followed to reach the nearby small stream.  Imagine long ago many, many, many salmons returned. The local news reported the salmons’ return in BC Canada lessened a lot in the last five years. A couple expressed in November 2012 to my partner at the local small park, the salmon’s return five years ago in 2007 was huge compared to now. To have seen that. To have viewed salmons in the earliest times!

My interest in cats motivated me to volunteer and care for household cats at a local SPCA shelter for a few years in Surrey BC. I have a black female cat. Read about the tigers in India.  Tigers will be extinct in the future. So sad. Man is the main predator. Man develops land, populates and spreads over land where the tigers and lions populate and once roamed far distances. The big cats need huge space to move. People, who chop and get rid of the jungle for lumber and other resources, eliminate the areas where tigers and lions travel. I read tigers are killed for parts by certain peoples of the world.

Salmons’ dilemma is similar.  Some developers of land are not aware or ignore the salmons’ habitat, the way they live and spawn. These developers take away the trees and ferns where salmons swim and hide for protection.  Salmon swim in cold water rather than warm water or they die.  In the U.S. most of the dams built eliminated the salmon routes in their return to spawning grounds. Now the climate has started to change to a warmer temperature, which will cause natural elimination.

Once eagles were an endangered species in North America, but they rebounded. So glad they revived, but other birds, animals and living things in this world are not as recoverable.

Some people care a lot, while others do not care what happens to the animals that live now not endangered and endangered. What makes people think birds, animals and living things last forever? Such as in the beginning in the United States, the colonizers nearly killed off the buffalo. From another point-of-view the colonizers figured, get rid of the buffalo will get rid of Indigenous people; a starvation technique used by the U.S. military. When I first heard about this technique, I had doubts. However, the more I thought about it, the more plausible it became.  Why do people kill animals and use parts of them?  What makes people create pipelines for gas or oil in BC such as the Northern Gateway Pipeline and assume the pipes will not leak on the land when they leak, which destroys the salmon, other animals’ habitats and pollute water? Arrogance, ignorance and greed affect the living things in the environment where the animals, endangered species and humans live. In 1971, Marvin Gaye wrote and sang in “Mercy, Mercy, Mercy,” fish, whales and animals get mercury, carcinogens from oil, gas or whatever poisons the ocean and land.  When miners mine uranium, miners receive cancer from exposure to radioactivity unless the mining companies resolved the problem. Among the few uranium-mining companies who wanted to mine uranium in the Grand Canyon in 2011 was a Canadian uranium mining company. Two First Nations live in the Grand Canyon of Arizona and use the Colorado River water. In fact, everyone in the U.S. west uses Colorado water. A twenty year ban was enacted upon uranium mining by the Obama Administration in the Grand Canyon, January 2012. United States and Canada are not innocent countries.

My point-of-view: Much of the world public is unaware about the environment, living things and endangered species in the world as well as other issues: racism, sexism, ignorance about Indigenous people in the Americas and other peoples of color in the world. In past history the world contained many abundant animals, salmons and other living things than now.  To educate people early on is the answer in elementary and secondary schools about information: living things and world issues. Who teaches the daughters and sons to be so well adjusted, informed, misinformed and prejudiced? Parents. Some parents raise their children well. I have met them. Also, I have met the opposite.  Some teenagers at sixteen with value systems develop and hardened into a warped reality. Almost too late. North American colonization, Manifest Destiny attitude in U.S. plays a huge part. I am a Dine’ filmmaker. My way is to change the information about the world: to write, produce create films and videos via drama, documentary or animation, write songs, poems and stories about the endangered species, sexism and racism and reverse the frozen stereotyped images of Indigenous people, especially about Indigenous women.  As far I am concerned, very little has changed.  This is 2013?! Cannot give up.  Resist. Educate.  Seeing the salmon swim up the stream to spawn, big fish in little streams further changed my life this November 25 - December 25, 2012.

Dine' filmmaker Arlene Bowman, originally from Greasewood, Ariz., on the Navajo Nation, grew up in Phoenix. She now lives in Vancouver. Her films have shown on PBS and in international film festivals.
at January 04, 2013