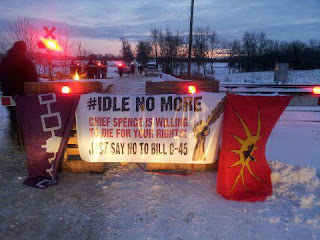 
Indigenous and human rights organizations stand in solidarity with Chief Theresa Spence in her appeal for full respect for Aboriginal and Treaty rights by the government of Canada. There is an urgent need for Canada to demonstrate genuine respect and long-term commitment, initiated by a meeting between First Nations’ leadership, the Prime Minister and the Governor General.
Full honour and implementation of Indigenous peoples' Treaties are crucial to the evolution of Canada and the principle of federalism. Cooperative and harmonious relations cannot be achieved by devaluing Treaties or by unilateral government actions.
We firmly support grassroots actions of the "Idle No More" movement. It has put the spotlight on federal policy and legislative agendas that are trampling the inherent rights of Indigenous peoples affirmed in domestic and international law.
Human rights – not colonialism
In 2012, the Supreme Court of Canada highlighted "the history of colonialism, displacement, and residential schools and how that history continues to translate into lower educational attainment, lower incomes, higher unemployment, higher rates of substance abuse and suicide, and ... higher levels of incarceration".
Canada must abandon out-dated, discriminatory approaches from the colonial era, especially in relation to Indigenous peoples' lands, territories and resources. What is urgently required is a principled framework consistent with international human rights law.
Currently countless amendments and laws are being adopted that undermine Indigenous peoples’ human rights, including Treaty rights. These legislative measures were developed with little or no consultation with Aboriginal peoples and without their consent. Such actions erode democracy, the rule of law and integrity of Parliament.
Indigenous peoples’ rights and related government duties are an integral part of Canada’s Constitution. They are affirmed in the UN Declaration on the Rights of Indigenous Peoples. The government should address this grievous situation in good faith. Justice, peace and reconciliation remain crucial objectives.
The omnibus budget bill C-45 introduced far-reaching changes. Amendments include changes to complex land provisions in the Indian Act that compound existing problems. It also re-writes environmental laws, including Navigable Waters Protection Act, Fisheries Act and Hazardous Materials Information Review Act, which were used to promote and protect a sustainable environment, clean water and healthy oceans. The integrity of the environment is being assaulted, to the detriment of present and future generations.
Canada is estimated to contain nearly 32,000 major lakes and more than 2.25 million rivers. Yet a new Navigation Protection Act reduces federal environmental oversight and covers only 3 oceans, 97 lakes, and portions of 62 rivers. Certain key rivers in British Columbia along the path of the proposed Northern Gateway pipeline are not included.
Resource development projects on traditional lands of Indigenous peoples will be much less likely to be subject to rigorous public environmental impact assessment. These changes are on top of cutbacks on environmental safeguards already passed in the previous omnibus budget bill C-38. As concluded by the David Suzuki Foundation: "In reality, amendments to environmental laws account for about half of the 452-page bill. These amendments will weaken Canada’s capacity for environmental governance, threatening our land, climate and water."
International human rights standards require that decisions affecting the rights of Indigenous peoples be made with their full and effective participation. In the face of very serious issues concerning lands and resources of Indigenous peoples, the appropriate standard is free, prior and informed consent.
Canada’s Supreme Court has said that the "Crown ... cannot cavalierly run roughshod over Aboriginal interests". There must be "reconciliation" between the power of the state and the pre-existing sovereignty of Indigenous peoples. "In all its dealings with Aboriginal peoples ... the Crown must act honourably. Nothing less is required".
It is tragic that a hunger strike and Canada-wide protests are necessary, in order for Indigenous peoples to bring attention to violations of their dignity, Treaties and human rights. Our organizations strongly support human rights education. We urge all Canadians to engage with Indigenous peoples, to help educate others, and to support the current movement of awareness raising and ensuring vital reforms.
For more information on events in your area, please see www.idlenomore.ca.
Supported by:
Amnesty International Canada
Arctic Athabaskan Council
Assembly of First Nations of Québec and Labrador/Assemblée des Premières Nations du Québec et du Labrador
Canadian Friends Service Committee (Quakers)
Chiefs of Ontario
Dene Nation/AFN Regional Office (NWT)
Earthroots
Federation of Saskatchewan Indian Nations
First Nations Summit
First Peoples Human Rights Coalition
Grand Council of the Crees (Eeyou Istchee)
Haudenosaunee of Kanehsatake
KAIROS: Canadian Ecumenical Justice Initiatives
Lawyers Rights Watch Canada
MiningWatch Canada
Union of British Columbia Indian Chiefs